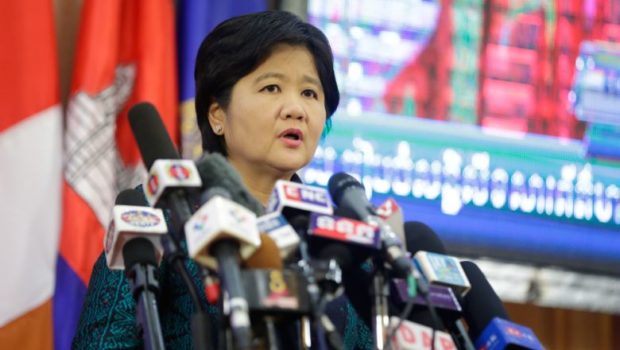 Ministry of Health spokesperson Or Vandine warned that Covid-19 risk level for individual transmission is at an ‘alarming rate’ in the Kingdom and its probability is ‘not low’. Heng Chivoan via The Phnom Penh Post/Asia News Network

PHNOM PENH — The Covid-19 risk level for individual transmission is at an “alarming rate” in the Kingdom and its probability is “not low”, warned Health Ministry spokesperson Or Vandine.

“Cambodia’s coronavirus scenario is classified as being at an early stage of the pandemic because of ongoing transmissions worldwide. A second wave can occur at any instance,” she said when responding to The Post.

Vandine said her assessment was due to the people becoming more relaxed because, as of Monday, there have been no new cases reported for 15 days in a row. And out of 122 cases, 119 persons have recovered with three still hospitalized.

She warned that Cambodians were now throwing caution to the wind and moving freely, going to the markets, malls and restaurants with little social distancing. She urged the people to continue with good hygiene practices and said this “should become the new normal”.

“I don’t want to label the Covid-19 risk as high or medium, but I can say that the situation in Cambodia is still at an alarming stage which means we have to be vigilant and very careful because the risk for individual [transmission] is not low,” Vandine said.

The low number of cases in Cambodia has been somewhat baffling when figures in neighboring states have comparatively increased many-folds over the months.

Since the initial spike of cases in early March involving participants of a large Muslim gathering in Malaysia, holidaymakers on the Viking river cruise boat, and French travelers in Sihanoukville, new cases slowed before stopping completely on April 12.

However, Cambodia has allegedly exported several cases based on statements by China’s health departments, and airlines in Cambodia that shuttled three to five cases weekly to China since the beginning of April.

According to news reports quoting the Guangdong Province Health Commission, a 37-year-old Chinese national showed symptoms of Covid-19 after arriving in China from Cambodia on April 10.

On April 22, another Chinese national, 41, was confirmed to have Covid-19 after leaving Cambodia for Guangzhou, Guangdong province.

The two cases are allegedly related to a 45-year-old businessman who was diagnosed with Covid-19 in China on April 3.

In a media conference on April 13, Vandine pointed out that the man who lives in Phnom Penh threw a dinner party just before he left the city, and that six close contacts, including two Vietnamese, a Cambodian couple, and a Chinese national were confirmed to have been infected with Covid-19.

“We have traced the Chinese contacts here and so far, so good, but people travel. This is a new virus and re-infection can recur even if a person is declared safe.

“Since there is no official communication, we have no information,” Vandine told The Post when asked to comment on the Chinese cluster.

The authorities have investigated the clusters although they have yet to pinpoint the original source of Covid-19 for the Chinese cluster. They continue to follow-up on three remaining contacts.

To date, 11,576 samples have been tested at the National Institute of Public Health and Institut Pasteur Du Cambodge. The figure grew by some 1,500 from last week, with 723 samples per one million population being tested.

The increase in samples resulted from re-testing those suspected to have been in close contact with positive cases in Boeung Keng Kang I and Koh Pich in Phnom Penh. This is part of the ministry’s Covid-19 clinical management and hotspot surveillance.

Separately, the ministry has conducted early warning tests for severe acute respiratory infection and influenza-like illnesses on factory workers who went home for the Khmer New Year despite the holidays being postponed.

Surprisingly, none have shown any unusual symptoms.

Previously, nearly 500 samples were taken on a daily basis but the number has since dropped.

Asked to specify the number of test kits available now, ministry secretary of state York Sambath assured that there is “adequate test kits to last till September”.

“Between 100 and 300 samples are taken daily by our 3,000 rapid response teams throughout the Kingdom. All of them are medically trained to take samples from suspected carriers,” she said.

Ministry spokesman Ly Sovann said only three contact traces remain to be concluded and that the Covid-19 rapid response team had identified and followed up on many of them.

In addition, some 2,000 out of 87,000 migrant workers remain quarantined as the rest have been sent home after being isolated and having shown no Covid-19 symptoms.

As for the tests carried out on factory workers who returned home for Khmer New Year, 112 out of nearly 6,000 samples that were sent to the designated laboratories for testing came out negative.

“We are using the same system that detects malaria, Severe Acute Respiratory Syndrome and novel Influenza A [H1N1] to monitor the people,” Sovann said.

However, he said there is not much detail on the re-testing of contacts that are suspected of having the virus.

“The tests depend on individual cases. Some turn negative after five days. Others, as in the case of a French person was tested 10 times. We are still working on the details,” he said.

In any case, Institut Pasteur confirmed that there is no bottleneck and it is able to cope with the current influx of test samples.

In the meantime, World Health Organization (WHO) representative Dr Li Ailan who made the “early stage” classification last week said multiple sources of information has been collected along with active aggressive contact tracing and case finding by the rapid response team.

For example, recent testing in Phnom Penh was expanded to others in an entire building after a person was found to be positive.

“We also collected specimens through our existing surveillance system, such as those with influenza-like symptoms. Out of 800 samples, none tested positive,” said Li.

Information is also gathered from other countries to see if there are cases that have a travel history to Cambodia. So far, the data indicate that Cambodia has limited incidents, unlike in Japan and China, and is at an “early-stage epidemic”, she said.

“However, there is no perfect system. We cannot conclude 100 per cent [that the situation is safe]. Our level of confidence is not low and not perfect.

“I do see a risk of importation and local community transmission if we don’t manage it well. I don’t think Cambodians are immune to Covid-19. We need to be vigilant,” Li said.

WHO encourages step-by-step unfreezing of restrictions but there are several criteria Cambodia has to follow instead of making “radical” decisions.

Among others, the Covid-19 infection has to be under control. Li found that Cambodia was in “good shape” while demonstrating a good public health system with its rapid response teams for the initial stage reporting.

“The nation has to ensure that the outbreak risk in a highly vulnerable setting is minimized and workplace preventive measures are established,” she stressed.