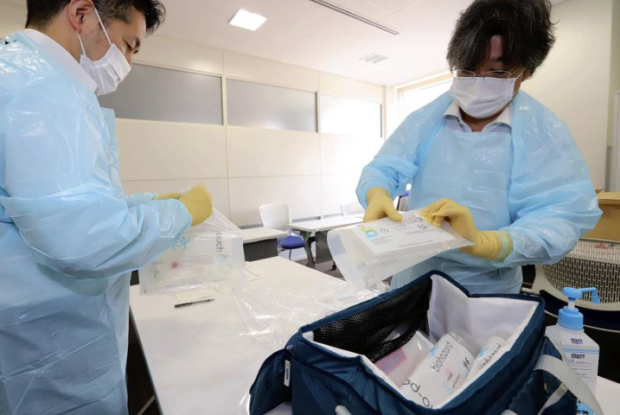 TOKYO — The unceasing spread of the new coronavirus has overloaded workers at public health centers nationwide.

At noon on April 16, the voices of 15 workers were heard responding to a barrage of telephone inquiries at a public health center in Katsushika Ward, Tokyo.

“Your test result hasn’t been back yet,” one said. “How are you feeling?” said another. “A private ambulance will be there soon.”

The callers include those who took PCR tests for the virus and those who had close contact with people who have been infected.

Whenever they find a new infection case, the center’s staff asks the Tokyo metropolitan government to prepare a hospital bed, schedule a vehicle to transport the new patient from their home to a hospital and instruct their workplace and family to sanitize and be aware of infection risks.

At the Katsushika center, there are five whiteboards hanging on one side of the wall that are filled with the names of hospitals where patients were sent and the conditions of their close contacts.

“I don’t think I can have lunch today again,” a public health nurse said as she hung up the phone glancing at the board.

In the other room, samples from 10 people suspected of being infected were delivered. The staff there confirmed the names and dates of examinees on the samples and placed them in a sealed bag labeled “biohazard” and sent them to an inspection institute.

In Katsushika Ward, a total of 93 people had been infected with the virus as of Saturday. The ward has tested more than 500 samples. A total of 140 workers, including about 20 backup workers, are coping with the cases at this health care center, but the center’s community health section chief said, “Their workload has increasing much faster than the speed of us increasing the number of staff.”

In Nagano, a male employee of a hostess bar tested positive for the new coronavirus on April 10. To prevent the spread of the infection, the city’s public health center tried to track down the customers who visited the bar after the employee developed the symptoms. But, the city faced a high hurdle to carry out the task.

“I only know their Line [messaging app] address,” one hostess said.

The hostesses knew the IDs of their customers on the free communication app but did not know their real names or phone numbers. The only thing they could do was to send a message: “Please contact a health center.”

A total of 36 people — including the bar’s customers who were contacted after seeing the bar’s name being announced — were found to have had close contact with the man infected. The city health center’s official said, “We still don’t know how far we could’ve checked.”

In environments like hostess bars, employees often sit next to customers, so a virus infection could spread easily.

In Gifu, a mass infection of 47 people, mostly at nightclubs, was confirmed. Tomoko Ando, a health nurse at the city’s public health care center, was interviewing a man who tested positive in early April.

“Who did you go to that place with?” Ando asked, and the man replied, “I don’t want to bother them, so please don’t ask about the people I was with.”

It took Ando several days to get him to reveal their names after she repeatedly tried to convince him over the phone that his companions were at risk of infection and that she would not tell them from whom she got their names.

Around that time, it had been past midnight when Ando, 40, could come home. It was only during breakfast that she could see her 14-year-old and 12-year-old sons, who have been at home due to the closures of schools. Ando wakes up every morning at 5:30 a.m. and prepares lunch and dinner for her family before going to work.

“It’s tough, but I am working hard so the number of people infected does not increase in this city where my children live,”Ando said.

These are some of the comments heard at the Minato Public Health Center in Minato Ward, Tokyo, in mid-April from mildly ill or asymptomatic people who wish to stay home.

Of the more than 230 infected people in the ward, about 100 were staying home for treatment as of Thursday. Since April, the number of people infected with the virus has increased by about 10 a day, while the supply of sick beds has become scarce. Under such conditions, the health center has asked mildly ill people, except the elderly, to stay home for treatment.

But in Saitama Prefecture, a man who had been waiting at home to be hospitalized was found dead on April 21, indicating the risk of sudden changes in an infected person’s condition.

Shortly after this incident, the central government announced a policy of “placing priority on keeping patients in accommodations.” However, it is not easy to convince those with mild symptoms to move to hotels prepared by the Tokyo metropolitan government.

A director at the Minato health center said, “We have to keep running while thinking of the best ways to monitor patients with limited medical resources.”

According to the Health, Labor and Welfare Ministry and the Japanese Association of Public Health Center Directors, there are 468 public health centers nationwide as of April, down 20% over the past two decades due to mergers and closures.

The association conducted an emergency survey at the end of March, when infections were surging, with a response rate of 55%.

The association received such responses as: “Many health nurses are exhausted due to lack of staff and tight budget.”; “Almost everyone has to work 24 hours.”; and “More and more employees may become mentally down.”

A proposal that was compiled by a government panel of experts on April 22 calls for reducing the burden on public health centers and strengthening their systems by rehiring retired nurses or entrusting the jobs to the private sector.

Chika Shirai, director of the Hirakata City Public Health Center in Osaka Prefecture, which conducted the survey, said: “There are not enough people to cope with a prolonged infection situation. The foundations of public health are being undermined.”