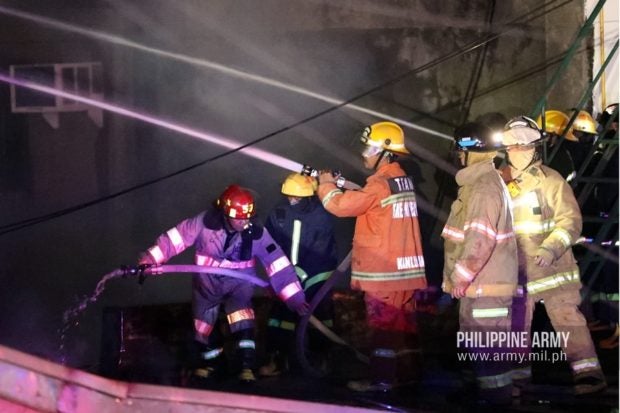 Firefighters put out the fire at the Philippine Army’s Finance Center in Taguig City on Monday night (April 27), but no casualties were reported./ OACPA

MANILA, Philippines — Fire broke out at the Philippine Army’s Finance Center in Taguig City on Monday night, but no casualties were reported.

The fire began at 8:45 p.m. at the GSMO office located inside the Finance Center. It was declared fire out at 10:03 p.m., Army spokesperson Col. Ramon Zagala said in a statement Tuesday.

The cause of the fire is still under investigation, while the cost of damage has yet to be determined.

Fire trucks from the Philippine Army, Philippine Navy, Taguig City, Pasay City, Makati City, Ayala City, Baclaran, and Pateros helped out battle the blaze on top of 15 other fire trucks that responded to the fire.

“This is an unfortunate event for the Philippine Army, however, we are very thankful that no one got hurt from the incident. We deeply appreciate how other units and cities immediately responded in helping us to stop the fire before it caused further destruction to other Army properties,” Zagala said.