Año defends cop in Dasma Village fracas: ‘He did his job well’ 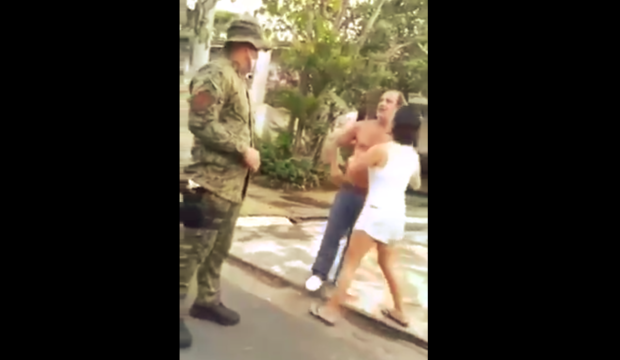 Screenshot of video from Makati City police showing Javier Salvador Parra and his wife (right) and a policeman.

MANILA, Philippines — Interior Secretary Eduardo Año on Tuesday said he will defend the police officer who attempted to arrest a Spanish resident of Dasmariñas Village in Makati City, saying the lawman “did his job well.”

“I will not allow any policemen to abuse and use their position to hurt others and do illegal things. Our policeman, Police Senior Master Sergeant [Roland Voni] Madrona, I will defend him. He did his job well,” Año said over ANC when asked if Madrona committed lapses in the attempt to arrest the foreigner in front of a house in Makati.

To recall, Madrona attempted to apprehend Javier Salvador Parra in the front yard of his own home during an altercation about the alleged violation of enhanced community quarantine protocols of the foreigner’s house maid, who was watering the plants without face mask.

Madrona also wanted to fine him P1,000 for the alleged violation of Parra’s housemaid.

Based on the video taken by Parra’s wife, Madrona was seen tackling Parra to the ground as he tried to arrest him. Parra, however, managed to elude the law enforcer after dashing inside his house.

Parra said he suffered from spinal injury and abrasions after the police officer tackled him to the ground.

But Año explained that the policeman was only enforcing quarantine protocols when Parra started hurling expletives against Madrona.

“They chanced upon this house maid who is not wearing a face mask.  It all started with the incident when they warned and advised the woman to wear the mask but instead of complying  here comes Mr. Javier topless not also wearing a mask started verbally abusing  our policeman,” he said.