MANILA, Philippines — Government authorities failed to protect detainees from the spread of the COVID-19, lawyers told the Supreme Court in response to the comment submitted by the Office of the Solicitor General (OSG). 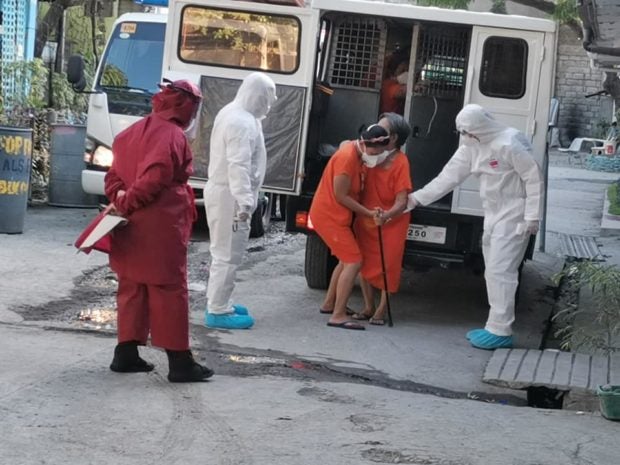 FROM MANDALUYONG TO MUNTINLUPA The 18 inmates from the Correctional Institution for Women were ferried in vans on Tuesday afternoon to a quarantine facility at the New Bilibid Prison in Muntinlupa City. PHOTO FROM BUCOR PUBLIC INFORMATION OFFICE

Replying to the comment of the OSG, the Public Interest Law Center (PILC) and the National Union of Peoples’ Lawyers (NUPL) lamented the failure of state lawyers to mention the plight of high-risk or vulnerable inmates such as the elderly, sickly and pregnant, whom they sought release for.

“Woefully, respondents have been silent on the matter of prison incredible overcrowding; consequently, they propose no decongestion measures,” read their reply to the Supreme Court which was submitted Monday.

NUPL and PILC represented the 22 detainees whom they said should be released on humanitarian grounds either through bail or recognizance because they are considered at high risk of contracting the disease due to their age and underlying medical condition.

In its comment, the OSG enumerated the preventive, precautionary, and responsive measures undertaken by the country’s prison facilities such as screening and risk assessment of individuals entering and going out of prison, cleaning and disinfection, promoting individual hygiene, contingency plans in dealing with suspected and confirmed cases.

While the OSG’s comment took note of addressing prison overcrowding, it however turned down the appeal for humanitarian consideration saying the detainees are not qualified due to the offenses that they are facing.

The OSG added that the detainees cannot compare themselves to former senator Juan Ponce Enrile who was allowed to post bail despite facing a case for plunder.

“The petitioners, in this case, have shown that they are more likely to escape once released,” the OSG said, citing previous cases of members of the communist party that have “absconded and remain at large.”

But PILC and NUPL said: “This gloomy speculation of the consequence of a ‘communist’ breaking out in the street during an outbreak is more dangerous than an unseen deadly virus is not only false, it is also awfully exaggerated and uncalled for.”

“Their political background, the circumstances of their arrests, and the non-bailable nature of the offenses thrown against them indicate without a doubt the political motivation behind these cases,” they added.

Interior and Local Government Secretary Eduardo Año earlier said it is safer for the detainees to stay in jail.

However, Quezon City already reported that nine of its inmates and nine jail personnel tested positive of the virus.

On the other hand, the Correctional Institution for Women already have over several cases of COVID-19 while the New Bilibid Prison (NBP) has one case that died last April 23.

“The enemy is COVID-19 and not the petitioners,” the PILC and the NUPL said.

The high court’s Office of the Court Administrator has already issued a guideline on how to decongest jails.

But petitioners said the guideline does not cover the sick and the elderly detainees.