White House aiming for Trump pivot from virus to economy

WASHINGTON  — After two months of frantic response to the coronavirus, the White House is planning to shift President Donald Trump’s public focus to the burgeoning efforts aimed at easing the economic devastation caused by the pandemic. 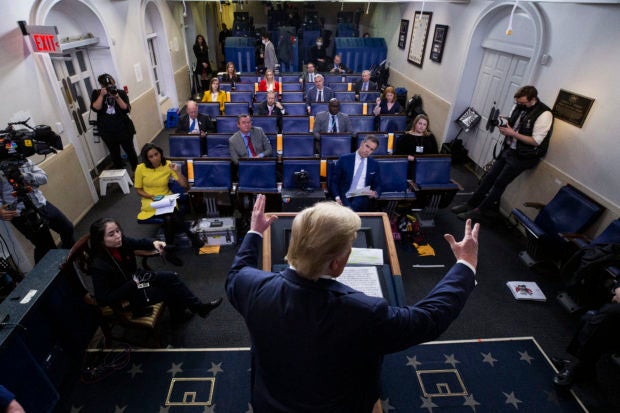 FILE – In this April 17, 2020, file photo President Donald Trump speaks about the coronavirus in the James Brady Press Briefing Room of the White House in Washington. After two months of frantic response to the coronavirus pandemic, the White House is planning to shift President Trump’s public focus to the burgeoning efforts aimed at easing the economic devastation. (AP Photo/Alex Brandon, File)

Days after he publicly mused that scientists should explore the injection of toxic disinfectants as a potential virus cure, Trump has now rejected the utility of his daily task force briefings, where he has time and again clashed with scientific experts. Trump’s aides are aiming to move the president onto more familiar — and safer, they hope — ground: talking up the economy, in tighter controlled settings.

It’s a political imperative as allies have seen an erosion in support for the president. What had been his greatest asset in the reelection campaign, his ability to blanket news headlines with freewheeling performances, has become a daily liability.

At the same time, new Republican Party polling shows Trump’s path to a second term depends on the public’s perception of how quickly the economic rebounds from the state-by-state shutdowns meant to slow the spread of the virus.

Some states have started to ease closure orders, and Trump is expected to begin to highlight his administration’s work in helping businesses and employees.

Aides said the president would hold more frequent roundtables with CEOs, business owners and beneficiaries of the trillions of dollars in federal aid already approved by Congress, and begin to outline what he hopes to see in a future recovery package.

Trump last left the White House grounds a month ago, and plans are being drawn up for a limited schedule of travel within the next few weeks, aide said. It would be a symbolic show that the nation is beginning to reopen.

The shift comes in conjunction with what the White House sees as encouraging signs across the country, with the pace of new infections stabilizing and deaths declining.

Still, medical experts warn that the virus will remain until at least a vaccine is developed and that the risk of a severe second wave is high if social distancing is relaxed too quickly or if testing and contact tracing schemes aren’t developed before people return to normal behaviors.

The White House is deliberating whether to continue to hold news briefings in a modified form without Trump, potentially at a different location. Before Trump said in a tweet Saturday that they were “Not worth the time & effort,” aides had been eager to use the briefings to highlight positive trends and to overwhelm Americans with statistics. It was an effort to restore confidence in the response so that the public would be comfortable resuming more normal activities.

Few Americans regularly look to or trust Trump as a source of information on the pandemic, according to a survey from The Associated Press-NORC Center for Public Affairs Research released last week.

On Monday, the White House was expected to release a recap of what the federal government has done so far to improve the availability of COVID-19 testing, personal protective equipment and ventilators.

Still, governors in both parties say much more is needed, particularly in testing, in the coming months, as they deliberate how and when to reopen their states.

“I want to get our economy back opened just as soon as we can, but I want to do so in a safe way so we don’t have a spike, we don’t cause more deaths, or an overloading of our health care system,” Gov. Larry Hogan, R-Md., told ABC’s “This Week.”

Birx expressed frustration that Trump’s injection comments were still in the headlines, illustrating the tensions that have emerged between the president and his medical advisers.

“As a scientist and a public health official and a researcher, sometimes, I worry that we don’t get the information to the American people that they need, when we continue to bring up something that was from Thursday night,” she said on CNN’s “State of the Union.”

As the White House hopes it has turned a corner, it is also beginning to assess responsibility for critical missteps. Two senior administration officials said Trump has begun discussions about replacing Health and Human Services Secretary Alex Azar, who led the coronavirus task force during its initial weeks and has been blamed for a culture of bureaucratic infighting during that period.

Azar has been largely sidelined since Vice President Mike Pence took charge of the task force in late February.

Trump on Sunday denied that he was going to fire Azar in a tweet, saying “Alex is doing an excellent job!”