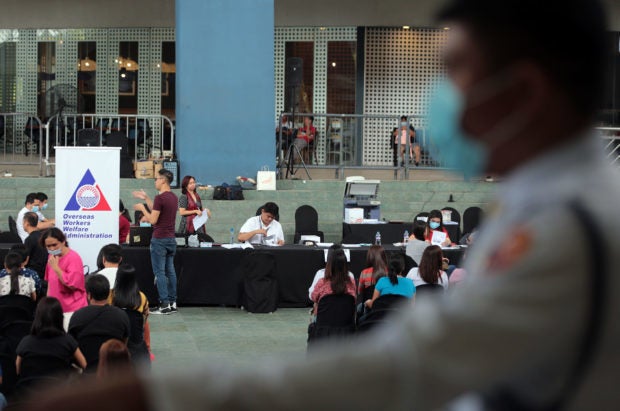 ASSISTANCE The Overseas Workers Welfare Administration extends financial aid and board and lodging not just to overseas Filipino workers (OFWs) who are unable to return to their respective
workplaces due to the Luzon lockdown amid the new coronavirus pandemic but also to returning OFWs stranded in Metro Manila. —GRIG C. MONTEGRANDE

MANILA, Philippines — The Overseas Workers Welfare Administration (OWWA) has called on local government units (LGUs), especially in the Visayas and Mindanao, to fetch their constituents who are stranded in hotels in Metro Manila due to the Luzon lockdown.

The appeal came after a 42-year-old woman who was repatriated from Kuwait allegedly took her life on Sunday at a lodge in Pasay City where she and 103 other overseas Filipino workers (OFWs) were staying.

“Our problem here is that the LGUs do not embrace them. I’m calling on the LGU heads, please help send our OFWs to their provinces. They are our modern heroes,” said OWWAS Deputy Administrator Faustino Sabarez III.

The effort will also help decongest hotels catering to arriving OFWs, he said.

Sabarez, quoting police reports, said the woman, who was from a town in Cotabato province, had told fellow workers that she tried to commit suicide in Kuwait. She had not been working for four months before her repatriation to the Philippines on April 4, he added.

A report reaching the Pasay police said the woman was found dead near a wooden stairway of the hotel around 6 a.m. She was last seen alive around 4 a.m. “bearing a sad face and noticeable anxiety,” according to the report.

Sabarez said his office traced the woman’s relatives and found a sister living in Quezon City. The sister went to Rizal Funeral Homes in Pasay on Sunday morning to see the remains.

But as of 5:45 p.m., the funeral home’s director, Renz Vera, said he had yet to receive any instruction from the woman’s family if the body would be cremated or brought to her province.

Most of the workers at the hotel were sent home by Dubai under the mass amnesty repatriation program, according to Sabarez. Some are pregnant and victims of abuses.

“It so happened that there was a (new coronavirus disease) COVID-19 (pandemic) and they were left stranded in Metro Manila,” Sabarez said.

He said most of the OFWs whose accommodations were sponsored by the OWWA were overstaying in the hotels, or had stayed beyond the 14-day quarantine period as one of the lockdown measures in Luzon. The lockdown, which was to end on April 30, was extended up to May 15.

Last month, Pasay Mayor Emi Calixto-Rubiano allowed hotels, motels and hostels in the city to stay open to accommodate returning or repatriated OFWs following a request from the OWWA.

The agency, through a directive of Labor Secretary Silvestre Bello III and its administrator, Hans Cacdac, will pay for the food and accommodation of the workers. Sabarez said his office was spending P2,000 for the accommodation of each OFW.

One of the first hotels which responded to the Owwa call is Sogo, which currently hosts sea-based OFWs from a cruise ship.

“We started looking for three-star hotels first and we will look for more hotels in case the OFWs will occupy the hotel,” Sabarez said. Those who prefer another hotel may transfer, he added.

The OWWA is currently coordinating with various local government units outside Metro Manila and the Philippine Air Force to help facilitate the return of the OFWS to their home provinces.

To practice social distancing, only one worker is booked per room.

Sabarez said the OFWs were discouraged from doing any social activity.