Some nations inch toward reopening as coronavirus deaths rise 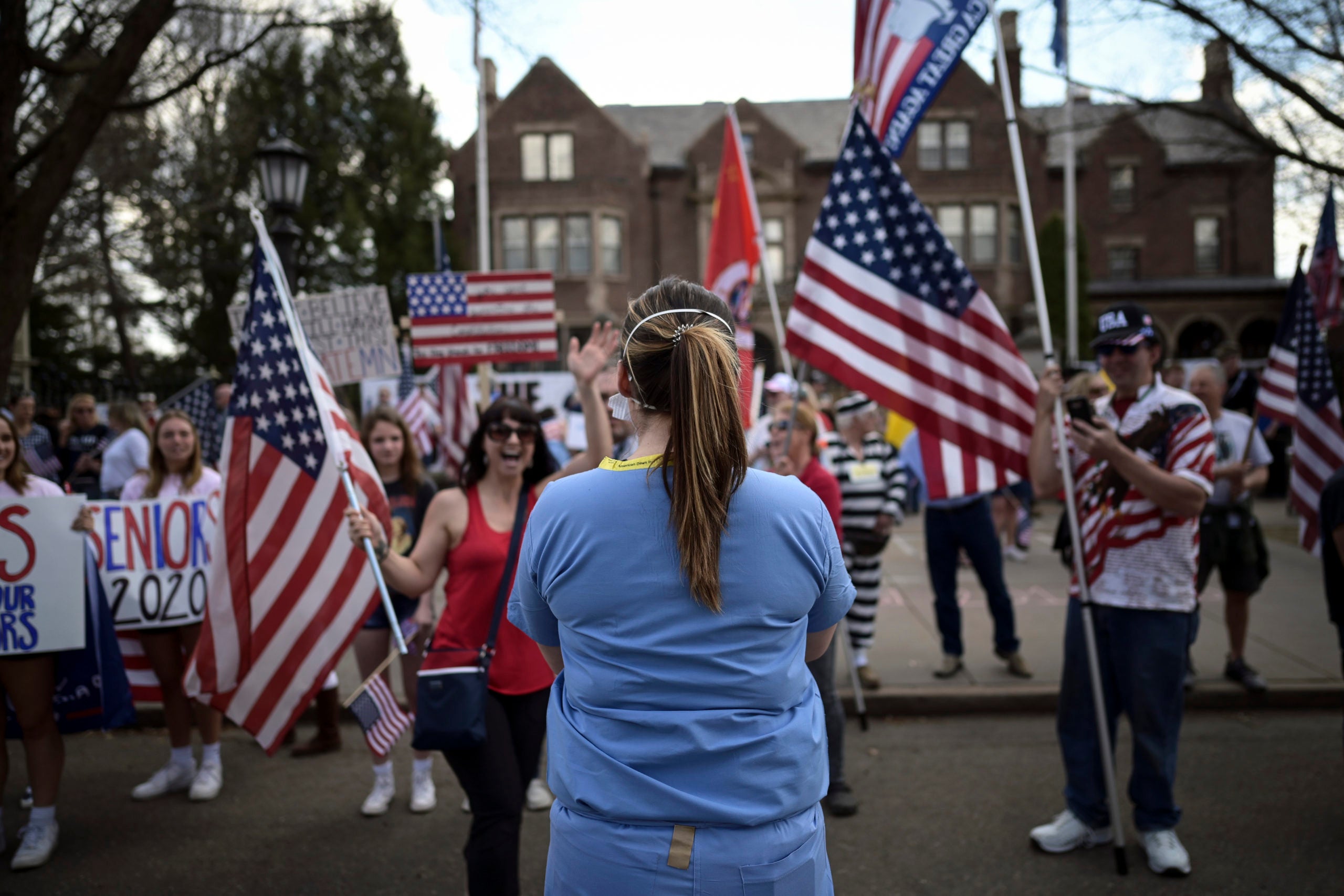 A woman who identified herself as a registered nurse in a local emergency room counterprotests in front of a demonstration to open up the state from the restrictions in place due to the new coronavirus, organized by the 3% United Patriots group, outside the Governor’s Mansion, Saturday, April 25, 2020, in St. Paul, Minn. (Aaron Lavinsky/Star Tribune via AP)

BEIJING — Hawaii extended its stay-at-home order until the end of May, and California police closed a park because it got too crowded as U.S. states and nations around the world took divergent paths on when to reopen their economies and communities.

The number of deaths officially attributed to the new coronavirus topped 200,000 globally, a figure widely believed to understate the actual total. A second U.S. Navy ship, a destroyer off the coast of South America, reported an outbreak on board.

Even as aides develop plans to shift President Donald Trump’s public emphasis from the virus to addressing the economic crisis it has caused, Dr. Anthony Fauci at the U.S. National Institutes of Health warned against moving too quickly.

Societies are navigating an uncertain path between preventing a resurgence of the virus and providing economic and psychological relief for people cooped up at home. Millions have lost jobs, with migrant workers and the poor particularly hard hit in many places. Protests have broken out from Berlin to Texas over the restrictions.

India allowed neighborhood stores to reopen this weekend, though not in the places that have been hit hardest. Neighboring Sri Lanka reimposed a nationwide lockdown until Monday after partially lifting it.

The Chinese city of of Wuhan, where the pandemic began, said that all major construction projects have resumed in a push to restart factory production and other economic activity after a 2 1/2 month lockdown. The outbreak has largely subsided in China, which reported 11 new confirmed cases Sunday and no additional deaths.

South Korea, which recently relaxed some of its social distancing rules, saw a ninth straight day with fewer than 20 new cases.

In Europe, Spain has joined Italy and France in preparing to loosen restrictions in early May, but the United Kingdom is holding off. Britain’s virus death toll topped 20,000, not including nursing home deaths, which are believed to be in the thousands.

Hawaii Gov. David Ige extended both the stay-at-home order and a mandatory quarantine for visitors through May 31. He warned of undoing progress if public places open up too early.

“This was not an easy decision. I know this has been difficult for everyone. Businesses need to reopen. People want to end this self-isolation and we want to return to normal,” he said in a statement.

A spring heat wave drove an uptick of people to California beaches, golf courses and trails. Police in Pacific Grove, about 135 kilometers south of San Francisco, said they had to close the picturesque Lovers Point Park and Beach because of a lack of social distancing.

Georgia and Oklahoma allowed salons, spas and barbershops to reopen, while Alaska cleared the way for restaurants to resume dine-in service and retail shops and other businesses to open their doors, all with limitations. Some Alaska municipalities chose to keep stricter rules.

Russ Anderson, who owns four tattoo studios in south Georgia, said he “couldn’t get up out of my chair quick enough” when restrictions were lifted. His main shop served 50 or 60 customers Friday when it reopened, with customers and tattoo artists wearing masks, he said.

But Shawn Gingrich, CEO and founder of Lion’s Den Fitness, decided his Atlanta gym would remain closed for now. “We’ve sacrificed so much already,” he said. “I feel like if we do this too soon, we’ll see a spike in cases and we’re back to square one.”

In Texas, Allison Scott said most customers of her women’s clothing store in a Dallas shopping mall seem to feel more comfortable having their purchases shipped.

“I want to be open more than anything but I don’t think that society is ready to come out either,” she said.

A survey from The Associated Press-NORC Center for Public Affairs Research found Americans overwhelmingly support stay-at-home measures and other efforts to prevent the spread of the virus.