MANILA, Philippines — The retired Army soldier who was shot dead by a policeman near a checkpoint in Quezon City was laid to rest with full military honors on Sunday at the Libingan ng mga Bayani in Taguig City.

A small group of family and friends sent off retired Cpl. Winston Ragos on his last journey in a low-key burial ceremony, which followed government guidelines on the coronavirus disease (COVID-19). Everyone in the funeral, from the family members to the pallbearers, wore face masks.

Ragos, who suffered from post-traumatic stress disorder and schizophrenia, was shot dead by a policeman manning the quarantine control checkpoint in Brgy. Pasong Putik, Quezon City on Tuesday (April 21), for supposedly violating enhanced community quarantine protocols. He was shot twice after he appeared to be trying to pull out something from his bag, which police claimed was a .38 caliber revolver.

The 34-year-old, unfortunately, died in the hands of his father’s former colleagues. His father was a former member of the Philippine Constabulary and was later absorbed by the Philippine Army.

He left behind his wife, who is currently working in Taiwan, and a seven-year-old daughter. 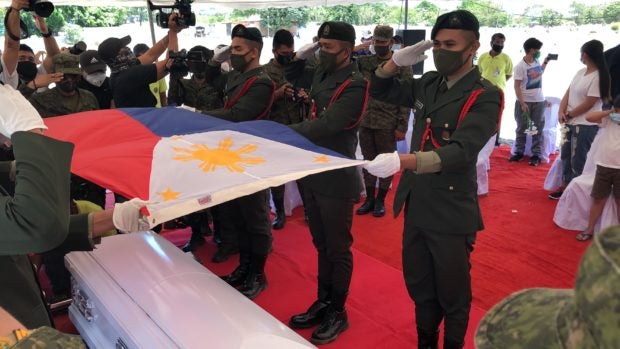 Retired Army soldier Cpl. Winston Ragos, who was shot dead by a policeman near a checkpoint in Quezon City, was laid to rest with full military honors on Sunday at the Libingan ng mga Bayani in Taguig City. FRANCES MANGOSING / INQUIRER.net

Ragos was discharged from the military in January 2017, after serving the Philippine Army for seven years. He was assigned to the 31st Infantry Battalion under the 9th Infantry Division in Camarines Sur.

The Army believed that he started showing early signs of mental trauma after his unit figured with communist rebels in several armed engagements in 2010. The Army tried to treat his mental illness for six years, until they had decided that he was unfit for service.

“The honors we rendered him today, he deserves it. All those who served his country honorably, we will give them the same honors,” said Army spokesperson Col. Ramon Zagala.

The Philippine Army had arranged the funeral and burial arrangements and also covered all expenses and assistance that the family would need.

It has also sought the assistance of the National Bureau of Investigation for an impartial investigation on the case, citing a “prejudgment” by police investigators.

“The accounts and other factors are not coinciding,” Zagala said. For one, Ragos’ family claimed that the former soldier did not have a gun in his bag at the time of the incident.

“We want to show both active and retired members that we will take care of you, and the CG (commanding general of the Army) has your back. We want to find out the truth to help you,” Zagala said.

“Although Ragos is already retired, he is still one of us. We leave no one behind,” he said.

He also insists that there is no friction between the Army and the Philippine National Police because of the incident. Both organizations are enforcing the enhanced community quarantine as part of the government’s response to address the coronavirus.

“It has no connection to the mission we are doing. The Philippine Army will continue to support law enforcement. We are just looking to find out the truth so that justice will be given to one of our soldiers. It has nothing to with our good relationship with the PNP,” Zagala said.

“This is just one soldier we are trying to help,” he said.

Read Next
200 fishers stranded in Occidental Mindoro set to come home to Palawan
EDITORS' PICK
Duterte praises military but slams police for poor discipline, corruption
COVID-19 cases surging in all regions and provinces, says DOH
Acer starts the year off strong with the Aspire Vero National Geographic Edition
DOH: Too early to say COVID-19 cases are declining
The best of bayside and city living at SMDC’s Sail Residences
Over 3 Million worth of prizes to be won at Smart Padala’s SENDali Manalo Promo!
MOST READ
Expert cites need to ‘reimmunize’ whenever there’s new concerning variant
Duterte praises military but slams police for poor discipline, corruption
Duterte wants Lapulapu statue in Cebu ‘bigger and higher’ than Magellan’s
Djokovic has to comply with rules to go to Spain, PM says
Don't miss out on the latest news and information.