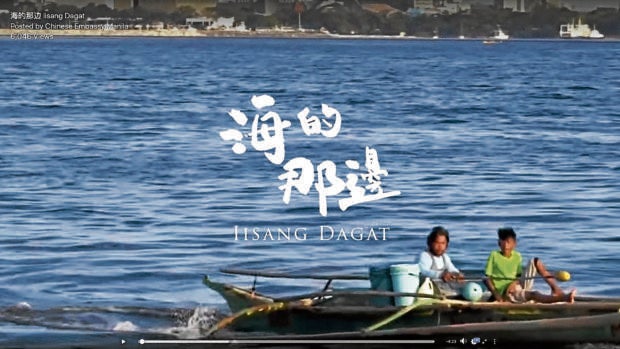 HOT WATER A Chinese Embassy project meant to foster solidarity in the fight against the coronavirus has provoked online hostility instead. —VIDEO GRAB FROM THE CHINESE EMBASSY FACEBOOK PAGE

Of all the metaphors it could use …

A wave of anger and disapproval swept social media over a music video that was intended to celebrate China’s solidarity with the Philippines in fighting the coronavirus.

Uploaded on YouTube on April 24, the video has tallied 73,000 dislikes and 792 likes as of this writing.

What mainly set netizens off was the song’s titular “sea” being a body of water supposedly shared by China and the Philippines — Asian neighbors locked in a longstanding dispute and on-and-off diplomatic spats over maritime claims in the West Philippine Sea.

Another apparent trigger was the footage of Philippine government officials expressing gratitude for the “first-class” hospital equipment donated by China, along with a clip of President Duterte saying: “Basta China, walang problema (If it’s from China, there’s no problem).”

One particularly irate netizen told the Inquirer that she couldn’t sleep because of anger and had to post an expletive-laden comment just to assert that “the WPS is for Filipinos. There is no such thing as iisang dagat. Coronavirus, that belongs to you (China) but you spread it around the world. Stop pretending you are with us like brothers; you are no one but an effing enemy of the world.’’

“And to those who were touched and left teary-eyed by the song, you are sick,” she said.

“China misled the world (on COVID-19). Now it’s trying to package itself as a friend by making ‘donations,’ all the while making active moves to take our West Philippine Sea,” said another comment.

According to the Chinese Embassy, the video is “dedicated to those who contributed to our fight against the epidemic … especially the China Medical Expert Team to the Philippines.”

The lyrics of “Iisang Dagat” were written by Chinese Ambassador Huang Xilian, it added.

Some of the harshest comments were directed at Papin, who was castigated “for singing for a Chinese propaganda song while China oppresses her own country.”

Reached for comment on Saturday, Papin said friends had alerted her to the reactions to the song.

“I told them it’s normal because they might have been surprised that a Filipino artist was in it,” she said in a phone interview. “It is a song about the unity of two countries, so I said ‘let’s not read too much into it.’”

Further explaining her participation, the singer said: “I received a text asking if I could sing the Tagalog [part]. When I asked, ‘Why me?’ They said I was picked by Ambassador Xilian.”

“This is really from the heart and for the love of the country. I did not ask for payment,” Papin said, adding that she hoped that the song would lift the morale of the country’s health workers as they respond to the coronavirus crisis.

“There’s no other issue here but cooperation, how China is helping the Philippines, right?’’ she stressed. “They came here bringing doctors and protective equipment.’’