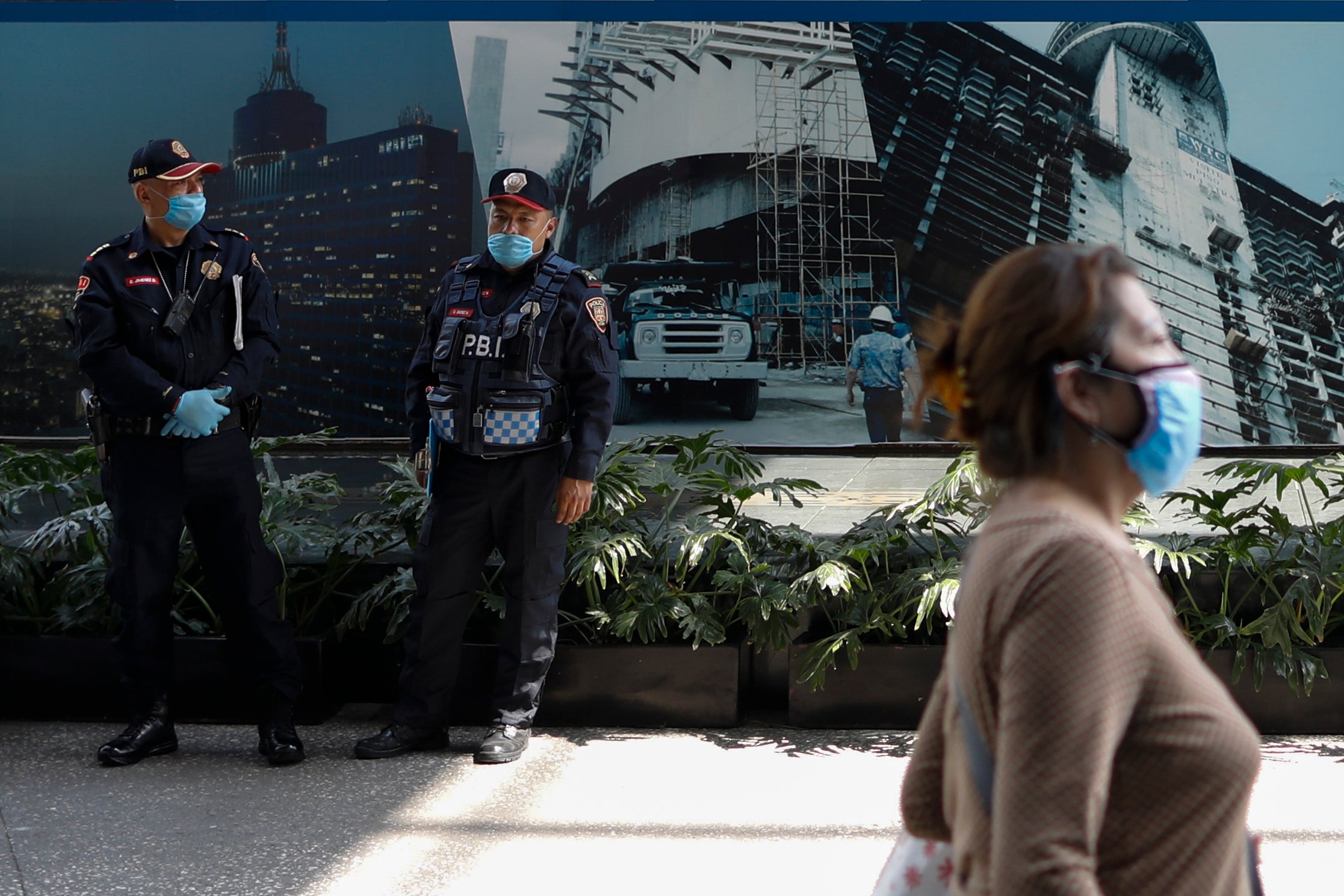 Police wearing face masks stand guard outside Mexico City’s World Trade Center, Wednesday, April 15, 2020. The Benito Juarez district of the capital this week decorated statues with protective face masks, as police trucks circulated playing a recorded message calling for anyone who leaves the house to wear a mask, to help stop the spread of the new coronavirus that causes COVID-19. (AP Photo/Rebecca Blackwell)

MEXICO CITY — Far from receding during the pandemic, Mexico’s homicide rate actually rose during March as the country started lockdowns to combat the coronavirus, according to figures provided Friday by the government.

The report shows killings rose 8.46% from February to March, from 2,766 to about 3,000 homicides. Mexico began implementing widespread shutdowns and social distancing measures to fight the pandemic in mid- to late March.

The March homicide rate was the highest since the record 3,074 killings registered in July 2018, five months before President Andrés Manuel López Obrador took office. Since then, the government said homicides had stabilized at around 2,850 a month.

López Obrador blamed the killings on drug cartels “who continue to fight over turf and drug-trafficking routes; they are fighting each other constantly.”

The homicide rate was highest in the north-central state of Guanajuato, which saw 1,163 killings in the first four months of 2020. The state is the scene of a bloody turf war between the Jalisco cartel and a local gang.

López Obrador acknowledged that the killings in the relatively wealthy, industrialized state of Guanajuato showed that economic growth alone would not stop the violence.

“Guanajuato is one of the states with the highest sustained rates of economic growth. For a long time, factories, assembly plants, the automotive industry, auto parts have set up shop there, there are jobs,” López Obrador said. “Nonetheless, it is the state with the most violence.

That has to do with other causes, inequality. Growth is not synonymous with welfare.”

Bloodshed also rose in the northern border city of Ciudad Juárez and some cities in the western state of Michoacán. Homicides decreased in the Pacific coast resort city of Acapulco.

The violence has touched health workers, for reasons directly related to the pandemic. A series of verbal assaults and other incidents — like people dousing nurses with bleach — may be related to fears of contagion. Mexico currently has nearly 13,000 confirmed cases and 1,221 deaths.

Attempted homicide charges were announced Friday against two suspects for one especially brutal attack that occurred April 17, when a nurse was punched and kicked in Mexico City.

Despite the uptick in gang violence, it appears that relatively few federal forces are fighting the drug cartels, while many more are involved in López Obrador’s infrastructure projects.

Mexico’s 100,000-member National Guard and 225,000-strong armed forces had an effective strength of about 161,000 operational members — the rest are in administrative or support roles — with about 26,000 of the 161,000 held in reserve, according to the report released Friday.

Of the deployed total, the largest single contingent, about 69,000 troops, were on construction duty, building things like Mexico City’s new airport.

An additional 18,600 troops were enforcing measures aimed to fight the pandemic, while about 12,500 were on border or migration duty. About 4,000 troops were deployed to eradicate drug crops. About 15,000 others are posted in regions where they may indirectly confront the cartels.