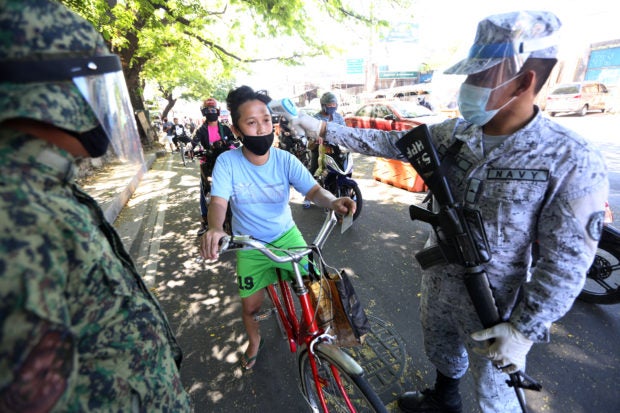 ORDERS Police and Navy personnel check the temperature of passersby at the boundary of Marikina and Antipolo cities on Friday. President Duterte has declared a second extension of the enhanced community quarantine until May 15. —NIÑO JESUS ORBETA

President Rodrigo Duterte on Friday threatened to declare martial law to crush the communist New People’s Army (NPA) whom he accused of stealing relief goods from people needing aid during the COVID-19 lockdown and killing at least two soldiers in a recent attack.

Mr. Duterte also threatened to hunt down members of the legal Left groups for allegedly supporting the rebels.

“Now I am warning everybody and putting notice to the armed forces and the police, I might declare martial law and there will be no turning back. What kind of martial law I will impose, that’s up to me,” he said in a nationally televised speech on Friday morning.

The President made the threat as he extended the enhanced community quarantine (ECQ) in Metro Manila and several other provinces where there are a high number of COVID-19 cases.

He said he would end the 51-year-old insurgency “in my time.”

“I have two more years. I will try to finish all of you,” he said.

Mr. Duterte said his order was to “kill them (Rebels) all” and also threatened members of the rebels’ “legal fronts.”

“You’re a bullshit. You’re the legal friends. They get money from you. Big businesses here, deposit money in your bank accounts and you get it. The reality is the NPA lives off from that, even through extortion,” he said.

“Do not force my hand into it. … All you legal fronts better hide. You’d better hide. Don’t fool me. I came from your ranks,” he added.

Ako Bicol Rep. Alfredo Garbin Jr. said there was no need for the President to declare martial law because the Luzon-wide lockdown already had the “force and effect of a de facto martial law.”

“Police and AFP (Armed Forces of the Philippines) hand-in-hand are manning check points and enforcing ECQ. There is a 24-hour curfew with exceptions on those doing essential work,” he said.

“Liberty of travel and abode is suppressed and the right to peaceably assemble is wanting,” Garbin said in a statement.

But the opposition Makabayan bloc said the President was only using “unverified” reports of attacks by the communist rebels to divert the public’s attention away from his government’s poor handling of the pandemic.

“We have now heard straight from the horse’s mouth that President Duterte intends to exploit the COVID-19 pandemic as a pretext to implement his scheme of imposing nationwide martial [law] and ruling as a dictator,” the group said in a statement.

Instead of making threats, the President should instead direct the fast-tracking of mass testing for the new coronavirus, contact tracing and ensuring protection of front-liners as well as giving relief supplies and cash aid to families who lost their livelihoods because of the lockdown.

Several senators supported the President but others expressed caution.

Sen. Francis Pangilinan noted that military rule had failed to end the communist insurgency even during the Marcos dictatorship.

“COVID-19 is the most serious problem at present, not insurgency … Martial law will not address this [health] crisis,” he said.

Sen. Joel Villanueva agreed, adding that the government should concentrate its resources on improving the country’s public health system and in carrying out more mass testing.

But Senate President Vicente Sotto III and Senators Panfilo Lacson and Aquilino “Koko” Pimentel III said Mr. Duterte was authorized by the 1987 Constitution to impose martial law if the NPA intensified its attacks on state forces.

Lacson, a former Philippine National Police chief, said he would support the declaration of martial law if the “enemies of the state will continue to harass military and police non-combatants especially those performing the humanitarian tasks.”

“In fact, I will encourage a no-nonsense military offensive against them,” Lacson said.

The Commission on Human Rights on Friday reminded the Duterte government that even during a public health emergency, it was obligated to uphold the rule of law and human rights.

CHR spokesperson Jacqueline De Guia said the government might be tempted to take “shortcuts” but the right to health could only be fully protected by the exercise of the other rights, such as right to information, food, free speech and economic security.

De Guia said there was also a need for clear guidelines for law enforcers in implementing quarantine measures.

“This will also serve as a safeguard against abuse of authority, guarantee respect for rights, and prevent undue panic,” she said.

The human rights group Karapatan said martial law would only worsen the pandemic.

“After wasting weeks on ineffective militarist and antipeople policies, Duterte is now using the Left and the pandemic as convenient scapegoats for his incompetence in responding to the COVID-19 pandemic and to condition the public for his Marcosian delusion of a formal declaration of nationwide martial law,” Karapatan Secretary General Cristina Palabay said in a statement.

The military said two soldiers were killed and three others were wounded in an attack on Tuesday by suspected NPA in Maria Aurora town, Aurora province.

The soldiers were securing the area as employees of the Department of Social Welfare and Development were distributing cash to beneficiaries of the government’s Social Amelioration Program.

Last month, another group of gunmen believed to be NPA guerillas, attacked soldiers doing community work in Rodriguez, Rizal. One soldier and a rebel were killed in the clash.

Earlier this week, two soldiers escorting relief supplies were wounded in a landmine explosion carried out by communist rebels in Paquibato, Davao City.

In Borongan, Eastern Samar, villagers presented a sworn statement to Gov. Ben Evardone claiming that NPA rebels on April 15 demanded a share of relief goods and a part of the internal revenue allotment (IRA) of the barangays of Guinmaayohan and Maybunga.

“They demanded that 10-percent of our IRA be given to them. When I told them that we have already allocated it to our village projects, they insisted that they will collect their share next year and should be given to them promptly,” said barangay chair Adela Ogale of Guinmaayohan in her affidavit.