BEIJING  — China, the world’s biggest energy consumer, is taking advantage of a plunge in global oil prices due to the coronavirus outbreak to build up its stockpiles of crude. 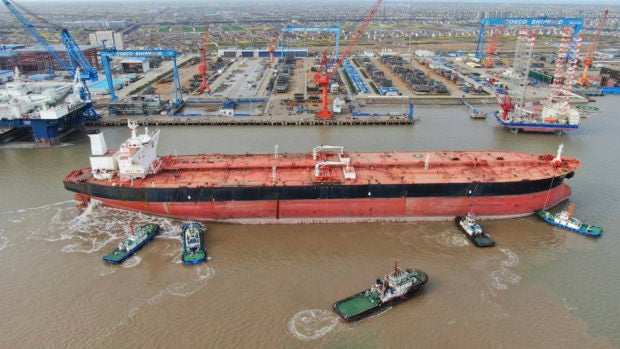 FILE – In this photo taken Monday, March 16, 2020, tugboats push a 300,000-ton very large crude carrier (VLCC) to a shipyard on the Yangtze River for retrofit in Qidong city in east China’s Jiangsu province China. China, the world’s biggest energy consumer, is taking advantage of a plunge in global oil prices due to the coronavirus outbreak to build up its stockpiles of crude. Imports rose 4.5% in March over a year earlier even as the world’s second-largest economy shut down to fight the virus and demand collapsed. (Chinatopix Via AP, File)

Imports rose 4.5% in March over a year earlier even as the world’s second-largest economy shut down to fight the virus and demand collapsed. For the first quarter of the year imports were up 5%.

The price collapse is battering state-owned oil producers but is a boon to Chinese drivers, chemical producers and factories. It gives Beijing a chance to add to a strategic petroleum reserve that is meant to insulate the country against possible supply disruptions.

“In the midst of all this, China oil imports have been resilient, as low prices have enabled stockpiling,” said Peter Lee, senior oil and gas analyst for Fitch Solutions.

As global prices fell, Chinese importers sent 84 tankers to Saudi Arabia in mid-March, each able to carry 2 million barrels of crude, according to news reports that cited the China Shipbuilding Industry Association.

Low oil prices “have a positive impact on China,” said the ruling Communist Party’s Political and Legal Commission on its social media account.
Beijing also appears to be adding to its strategic stockpile, though details are secret.

The Cabinet’s National Energy Administration reported in September that total reserves held by the government and oil companies were equal to 80 days of consumption.

The official reserve stands at about 385 million barrels, according to Lee of Fitch Solutions. He said plans appear to call for increasing that to 500 to 600 million barrels.

If enough additional storage capacity is built, the government might import 500,000 to 900,000 barrels per day for the strategic reserve, or 5% to 9% of China’s total foreign purchases, according to Lee.

The government reserve uses three tank farms and state media say a fourth might be under construction.

The Communist Party commission said the plunge in prices gives Beijing a unique chance to build up that reserve but gave no indication the government was doing that.

“This is a once-a-century opportunity!” the commission said.

Cheaper crude is one of China’s few economic bright spots in the coronavirus pandemic.

The economy suffered its worst contraction since the mid-’60s in the first quarter, shrinking 6.8% from a year earlier after Beijing closed factories and told some 800 million people to stay home.

Forecasters expect little to no growth this year, down from 2019’s 6.1%, which already was a multi-decade low.

That is politically risky for the ruling party, which bases its claim to power on associating itself with China’s economic success.

China has relied increasingly on imported oil and gas since the late 1990s as manufacturing, car ownership and airline travel boomed.

Imports make up about half of consumption. Half of that comes from the Middle East and the rest from Russia, Southeast Asia and Africa.

The ruling party wants to curb that reliance, which communist leaders see as a security risk. That is a major factor behind Beijing’s multibillion-dollar investments in hydro, wind and solar power.