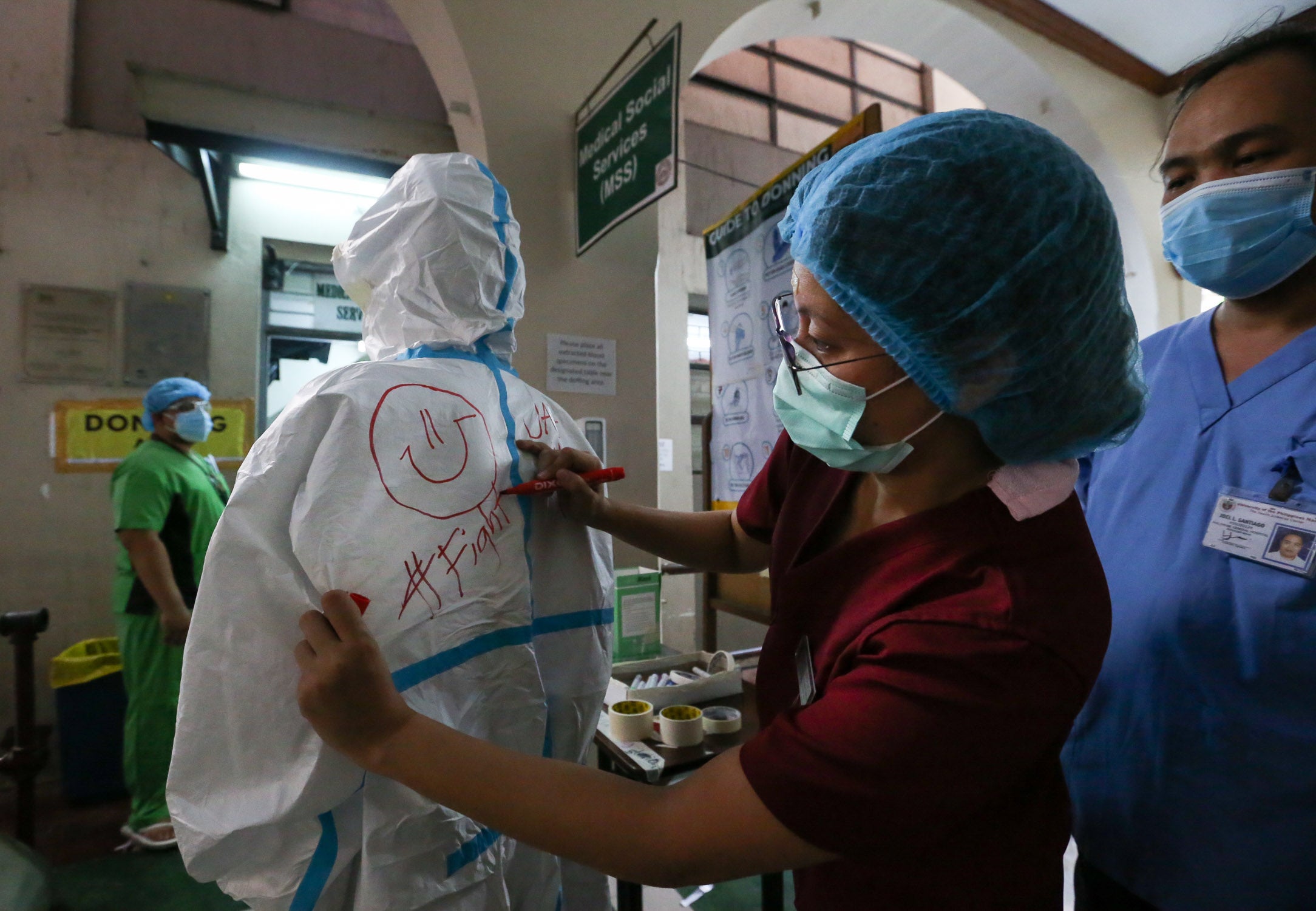 CHEERING THEM UP A nurse draws a smiley face on the back of a fellow health worker’s protective suit before she enters a COVID-19 ward at the Philippine General Hospital. —LYN RILLON

Health Secretary Francisco Duque III said on Wednesday that the fewer deaths in recent days and the longer time for cases to double showed that the new coronavirus outbreak in the country had been managed.

Duque, however, stressed that the Department of Health (DOH) had yet to see if this would hold up, especially as President Duterte is expected to decide whether to lift, extend or modify the Luzon lockdown.

He said it would take “several more days” to see whether the slowing in the infection rate reflected the beginning of a downtrend.

He cited the 14-day doubling time of cases as one of the accomplishments of his department in managing the outbreak.

“On April 5, the World Health Organization (WHO) said that our cases would double in four days. But that didn’t happen. This is proof that our doubling time has in fact been prolonged, which is good,” he said.

At that time, total coronavirus cases in the country were 3,246. Based on the four-day doubling time that Duque said the WHO had estimated, total cases should have increased to 6,492 by April 9.

Asked if the government was already close to reducing infections to a manageable level, Duque said the “next few days might help us get a more complete picture.”

But he warned that cases would “certainly” go up if current measures such as the Luzon lockdown were suddenly lifted.

As of Wednesday, the country had 6,710 confirmed cases with 111 more people testing positive for SARS-CoV-2, the new coronavirus that causes the severe respiratory illness COVID-19.

The total number of recovered patients rose to 693 with the recovery of 39 patients. The death toll is now 446 as nine more patients succumbed to the disease.

From April 5 to April 23, the reported number of new cases was around 200. A spike in cases was only seen on April 6 when there were 414 new infections.

During the same period, the daily reported deaths were around 20, except on April 12 when 50 fatalities were recorded.

It must be noted though that although the government trumpeted mass testing, its “expanded testing” remained basically the same with the addition of health-care workers in the priority population.

Still to be tested are severely ill people, those with preexisting ailments, and people who belong to the vulnerable population, such as the elderly and pregnant women.

The number of accredited testing centers nationwide also remains at 17. But Health Undersecretary Maria Rosario Vergeire said the government’s capacity would be beefed up with the arrival on Saturday of 3,000 test kits that could be used by 16 laboratories with GeneXpert machines.

Originally designed to test patients for multidrug-resistant tuberculosis, the GeneXpert machines are automated and can process samples in 45 minutes.

Improper use of protective gear

Duque also said on Wednesday that the high rate of infection among health-care workers could be reduced once the government implemented the recommendations made by the Chinese medical experts who recently visited the country to observe how the government was fighting the coronavirus.

Apart from the shortage in personal protective equipment, Duque said one of the reasons for the high infection rate among health-care workers might be improper way of using hazard gear.

But as the DOH is already dealing with the matter, Duque said, the government hopes to see a downtrend in infections among health-care workers.

On Wednesday, presidential spokesperson Harry Roque asked the Food and Drug Administration (FDA) to study the Fabunan antiviral that is being discussed on social media and see if it could be used in treating COVID-19 patients.

Roque said he had spoken to FDA director general Eric Domingo and asked that a ruling on Fabunan be issued.

“As long as the FDA hasn’t done this … many would always believe that this could be a cure,” Roque said.

Domingo said earlier that there was no registered drug for COVID-19 or application for any drug claiming to be a cure for the disease.

He said the FDA would certify a drug only if the manufacturer could show that the development process, including the ingredients used, was safe and compliant with international standards and that the drug had undergone extensive clinical trials, which could take months.

The FDA chief issued the statement amid claims on social media that the Fabunan antiviral was awaiting government certification for use in the treatment of COVID-19.

President Duterte has encouraged Filipino scientists to find a cure for COVID-19 and offered a P10-million reward for the one who would succeed.