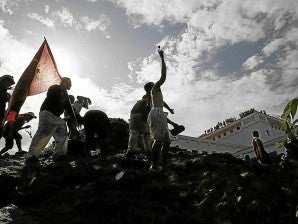 “Patay kung patay. Hindi kami aalis dito (We’ll die if we have to. We’re not going anywhere),” a man who lived in the area was heard saying.

From 9 a.m. to 11 a.m., residents hurled projectiles as the police and demolition crew hid behind shields. From time to time, explosions caused by molotov bombs would drive the authorities farther back while fire trucks moved in to put out small fires.

At one point, the fire trucks and a bulldozer tried to break up the residents’ ranks but they proved useless.

What finally sent the residents fleeing were tear gas canisters hurled into their midst.

After the tension died down, 33 people were reported to have suffered injuries. Of the total, only seven were from the residents’ side while the rest were policemen and members of the demolition crew. One policeman had to be treated for burns after his right arm was hit by burning shards which came from a molotov bomb.

Grace Cortes, the city’s public information chief, said that eight of the injured were rushed to San Juan Medical Center for treatment.

“Some suffered abrasions while others had bruises after they were hit by stones or marbles,” Cortes added.

The police later rounded up 18 residents who allegedly took part in the violent clash and took them to the San Juan Police headquarters. Six protesters who held a rally in front of the police station to demand the release of the 18 were also held by authorities.

“One thing for sure, we are going to file charges. Look at what they did to our policemen,” said Senior Superintendent Rainier Espina, city police chief.

The police, however, denied that they were behind the firing of the tear gas canisters. “It did not come from us. It came from them [residents],” Supt. Tomas Arcallana, the head of the police team which was deployed to the demolition site, told the Inquirer.

He added that they only took advantage of the confusion created by the tear gas to disperse the protesters.

A resident admitted that they could have kept the police and demolition crew at bay indefinitely if not for the tear gas thrown into their ranks.

“We would have won if not for the tear gas,” said a crying 15-year-old girl in Filipino. She identified herself only as Kat.

She said that her family had lived in the area—a portion of a 1.6-hectare government property beside the historic Pinaglabanan Shrine—for more than two decades.

Kat added that they had refused the offer to be relocated to a housing site in Barangay (village) San Isidro in Rodriguez, Rizal, because it was too far away from her school, the hospital and her parents’ workplace.

“They are so evil. Why are they doing this to us?” she said, referring to authorities.

According to Cortes, the defiant residents were only a minority as 73 of the 123 families in Barangay Corazon de Jesus, the last batch to be evacuated, had agreed to move out. They were also offered P10,000 in cash and half a sack of rice.

Since last year, 400 families in the area have been relocated. The government plans to build a new city hall and one-stop-shop government center on the disputed lot.—With Karen Boncocan, INQUIRER.net

Read Next
Force evacuation of Pantukan landslide site gets underway
EDITORS' PICK
Smart reinforces superiority with best speed and mobile video experience in PH
Don’t waste the hope of vaccines, warns WHO
822 NPA-free barangays set to get P20-M gov’t aid — Esperon
Nestlé Philippines’ ‘NESCAFÉ Plan’ bags Grand Anvil at PRSP 56th Anvil Awards
Every Filipino home can now be a smart home with realme TechLife
Pope Francis to meet top cleric Sistani on second day in Iraq
MOST READ
Robredo on Sara Duterte leading poll surveys: Why are Filipinos drawn to leadership of this kind?
So: I lacked connections to succeed in PH ‘culture’
US weapons, hardware in exchange for VFA
Gerald admits being with Julia, reveals breakup with Bea through ‘too many conversations’
Don't miss out on the latest news and information.