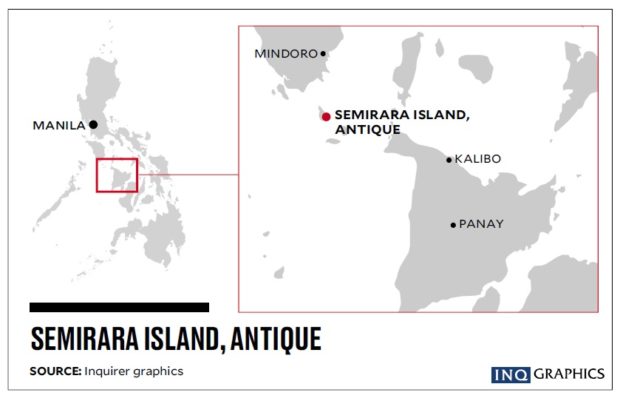 “While the coal operations in power and mines are ongoing during lockdown, are the Chinese vessels allowed? Do they undergo immigration, quarantine, stringent health protocols?” Legarda said in one of her tweets on Sunday.

In a statement, Semirara Mining and Power Corp. (SMPC) assured that docking and operation of foreign vessels on Semirara Island were in accordance with the government’s COVID-19 protocols and done in coordination with concerned agencies.

SMPC has been operating one of the biggest coal mines in Asia since 1999 on Semirara, a 5,500-hectare island in Caluya town, 159 kilometers from the Antique mainland, which is accessible only by private plane or by motorboat.

The statement said SMPC, since February, had prohibited crew members of foreign vessels from disembarking, in compliance with the “no disembarkation” policy enforced by the Caluya government.

All those involved in operations follow health guidelines, including social distancing, wearing of masks and hazardous material suits, SMPC said.

Bong Sanchez, president of the environmental group Save Antique Movement, said three Chinese vessels arrived in Semirara starting April 11 after enhanced quarantine measures were implemented in the province. One vessel left on April 17 and another on April 20, he said.“People, including employees of the mining company, are concerned about the presence of Chinese crew members, but they are afraid to speak out for fear of earning the ire of the company,” Sanchez told the Inquirer.The first confirmed case of COVID-19 in Antique was a worker, reportedly a consultant, of the mining company who arrived on the island from Metro Manila on March 9. Three more workers, who were in close contact with the patient, were later confirmed to be infected.

Sanchez said some residents and employees raised alarm when the vessels continued to arrive despite border and port restrictions when quarantine measures were implemented last month.

According to Legarda, the export of coal to China is not essential at this time.

“So why the need for Chinese vessels? This important question begs for an answer. The welfare of my people is paramount,” she said.Legarda said the island must be on lockdown to protect the people, and the mining firm and local officials must answer all these serious concerns.The presence of a China-bound vessel on an island off Guiuan town in Eastern Samar province also caused anxiety among its residents recently.

Daipen Montes, official of the Homonhon Environment Rescuers Association (Hero), said that while the foreign vessel had already left on April 18, this did not appease them.

She said the group had put on quarantine 20 men who helped load a cargo of chromite ore on the vessel which was manned by 13 Chinese and four Myanmar citizens.

The 20 were isolated inside the compound of Techiron Resources Inc., which secured a permit to mine chromite ore, and were monitored by the company doctor.

The quarantine would end on May 1.