Activists on relief ops in Bulacan charged with quarantine violation 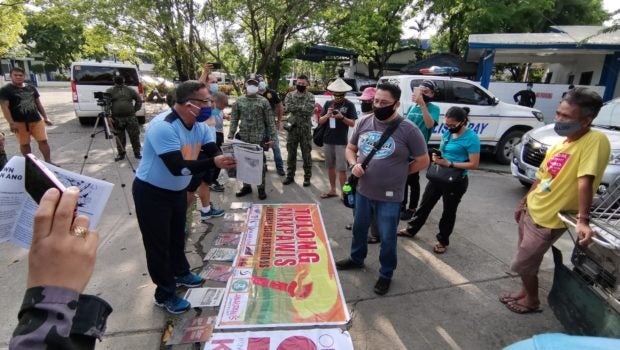 The relief team was stopped at a checkpoint in Barangay Bigte in Norzagaray town at 11 a.m. when they could not present valid quarantine passes. Its members were Karl Mae San Juan, 29; Roberto Medel, 52; Raymar Guavez, 21; Tobi Estrada, 22; Marlon Lester Gueta, 26; and Eriberto Pena, 60.

“They have no authority to travel outside Metro Manila,” Interior Undersecretary Jonathan Malaya said, adding that the group also used an unauthorized food pass, which is issued only to vehicles getting supplies from farm to market.

On Monday, they were charged with violation of the Bayanihan to Heal As One Act and Article No. 151 of the Revised Penal Code, which punishes disobedience to persons in authority.

The militant group Bagong Alyansang Makabayan in Central Luzon condemned the detention of the Anakpawis volunteers, saying their intention to help people suffering during the Luzon lockdown was subjected to “draconian tactics instead of being welcomed by the government.”

It said the relief goods were to be given to poor residents and farmers in Norzagaray.

Col. Lawrence Cajipe, Bulacan police chief, doubted the nature of the trip to Norzagaray, noting that propaganda materials were seized with the relief items

“In the guise of distributing relief packs and using a fake food pass, they violated the [enhanced community quarantine],” said Malaya, who is also the spokesperson of the Department of the Interior and Local Government.

“Breaking the quarantine rules is breaking the law. Let’s not be hardheaded,” he said in a statement.

Malaya said the Anakpawis jeepney carried “more propaganda materials than relief goods.” He said the materials indicated they planned to hold a mass gathering, which, he noted, was prohibited during the quarantine.

He described the Anakpawis team members as “pasaway” or unruly, claiming they used the name of former Anakpawis Rep. Ariel Casilao when they were flagged down.

Casilao had gone to Bulacan when he was informed about the arrest, but he was not included in the charges.Another militant group, the Kilusang Magbubukid ng Pilipinas (KMP), said the arbitrary detention of the volunteers was a clear case of “power tripping and grave abuse of authority” by the police.

KMP said the relief packs included food, soap and vitamins, handouts about COVID-19, and past issues of an alternative newspaper Pinoy Weekly and Linang, a KMP publication.

“What’s wrong with handing out newspapers and flyers?” Casilao said in a statement released through KMP. “The people’s right to express and be critical is not lost even during a lockdown.”

Karapatan, a militant human rights group, called for the immediate release of the relief workers, saying their arrest was meant to intimidate and harass individuals and groups that expose the government’s inadequate response to the pandemic.