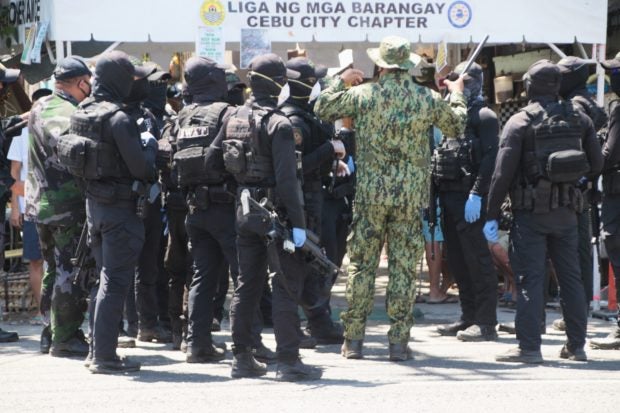 When told that he was positive for coronavirus and had COVID-19 last April 16, he was shocked.

“Then I got scared,” he said in an interview over radio station dyLA on Saturday (April 18).

What scared him was the prospect of being alone, not seeing relatives who would not be allowed to accompany him during confinement in a hospital when he starts showing symptoms.

The only thing that could keep him in touch with his family was his phone so he planned to bring it with him.

Comaingking is one of 136 persons found positive for coronavirus in Sitio Zapatera at Barangay Luz, a densely populated urban poor village at the heart of the city’s financial district.

The village has been on a lockdown after health officials feared community transmission. The village had 70 percent of the city’s 186 COVID-19 cases as of Monday (April 20).

Comaingking said he didn’t know where he got the virus because he kept his distance and had been wearing a mask.

He recalled having a habit of sitting on a bench outside his house, which is accessible through a narrow pathway inside Zapatera.

“I just sat on the bench and would not talk to people who would pass by,” he said.

“It is really puzzling because our two elderly neighbors have been tested positive of the virus when they don’t even go out of the house,” he added.

Comaingking said he suspected that the virus might have come from city health workers who went to Zapatera to take respiratory samples for tests earlier this week.

He said he noticed that the health workers won’t remove gloves and use new ones after swabbing people’s noses and throats for testing samples.

“I had observed that they were using the same gloves when taking swab samples of residents here,” he said.

Another Zapatera resident also had the same observation on a post that was circulated on Facebook. It had been shared 154 times since it was posted on April 15.

“Those who were taking the swab tests didn’t remove their gloves and personal protective equipment,” the post said.

“Sorry but unless I see them changing their PPE and gloves, I would not take the swab test,” it added.

“Virus is possibly present on their arms and they would touch the people when taking swab test?,” the resident wrote.

The residents might just have gotten the wrong impression because the gloves had just one color.

Comaingking’s daughter, Jemelie, said she would not allow swab tests on the rest of the family.

Jemelie, a former reporter, is now working abroad but her two sons, aged 20 and 16, are with her parents.

Jemelie said in an interview through Facebook chat that her neighbors also refused to have their swab samples taken due to suspicion that the failure of health workers to change gloves after every swab had caused the infection to spread.

“I am scared to have the rest of the family tested because I don’t trust the way they take the swab samples,” Jemelie said.

But the family continued to fight the COVID threat in a different way, she added.

Cebu City Mayor Edgardo Labella earlier said those found positive of COVID-19 in Zapatera would be placed in a quarantine site.

But Comaingking was still in his family’s three-story home as of April 20, four days after he was tested positive.

All 12 members of the Comaingking family live under one roof: Comaingking, his wife, a daughter and grandchildren.

Since he was tested positive for coronavirus, Comaingking has been staying on the ground floor while the rest of the family occupied the upper floors.

He would go out of his room only to get food from the kitchen after the rest of the family had gone upstairs.

Before sleeping, they would inhale steam from hot water mixed with ginger and salt while under the blanket.

Comaingking, whose only symptom could be his consistent coughing, said he finds the family’s situation sad but vowed to fight coronavirus with his family.

Another Zapatera resident told the Inquirer that his family has been taking preventive measures to ensure none of them would catch the virus.

Angel, who declined to give her full name, said the family had covered their windows and doors with cellophane – enduring the humidity and heat of summer just to protect themselves from the virus.

They also regularly disinfect the house.

But she has an appeal to the city officials –to exert all efforts to save their community from a disease that has no cure yet.