Cambodia: Unemployed to get $40 per month 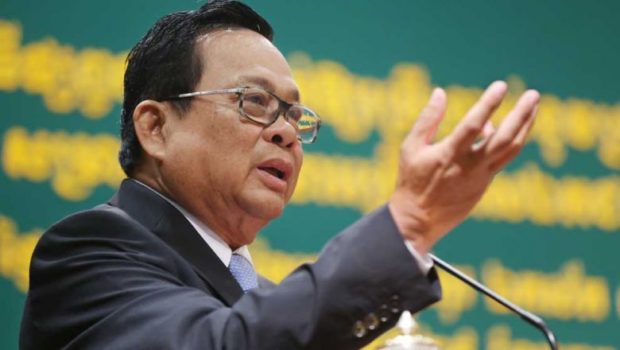 Minister of Labour and Vocational Training Ith Sam Heng has warned that employers who do not fill out unemployment forms will have to pay the $40. Hean Rangsey via The Phnom Penh Post/Asia News Network

PHNOM PENH — Cambodia’s Ministry of Labor and Vocational Training has instructed enterprises, business owners and travel agencies in five provinces to prepare the proper forms for the suspension of employment contracts.

This, it said, will make it easier for the ministry to transfer $40 a month to workers and employees via Wing (Cambodia) Limited Specialized Bank.

On April 7, Prime Minister Hun Sen announced changes in the allowances for temporarily laid-off garment workers from receiving 60 percent of the minimum wage to a flat $70. Of the figure, $40 will come from the government and $30 from factory employers.

Along with the change, the Garment Manufacturers Association in Cambodia (GMAC) requested the ministry to issue concrete instructions around the procedure to give out the allowance. Some workers had claimed they had yet to receive the $40 from the government.

An instruction letter issued by the ministry dated on April 17 said for the government to provide the $40, employers or owners of factories, enterprises and establishments in the textile, garment and footwear sectors have to follow the procedure mandated by it.

The letter confirmed that employees in the tourism sector who are in Phnom Penh, Siem Reap, Preah Sihanouk, Kep and Kampot provinces and out of work because hotels, guesthouses, restaurants and travel agencies were affected by the Covid-19 pandemic were subject to the same conditions.

“The dissemination and the notification of ID, personal phones or relatives’ phones are to be made widely and openly to suspended workers and employees for the ministry to transfer $40 a month via the bank,” it said.

The ministry also warned that in case owners of factories, enterprises and establishments failed to fulfill the instructions, they have to take responsibility for paying workers the $40 themselves.

Minister Ith Sam Heng also confirmed in a letter of instruction that when owners of enterprises in the garment and tourist sectors fulfilled all conditions when factory and enterprise owners announce a work suspension of seven to 10 days, workers would receive an allowance of $10 from their employers and $15 from the government.

“After a 10-day employment contract suspension, workers and employers will receive a message on their phones from Wing informing them of the amount of money to be received.

“After receiving the notice, please take your Cambodian ID to secure your allowance from any Wing agent,” he said.

However, Sam Heng confirmed that in case workers failed to collaborate in providing documents and phone numbers, they will not receive the $40 from the government – meaning they would give up the allowances.

GMAC deputy secretary-general Kaing Monika could not be reached for comment on Sunday.

Cambodian Alliance of Trade Unions president Yang Sophorn said employers had previously failed to fill in documentation properly as per the procedure of the work suspension. “That’s why it made the government’s performance slow or non-existent,” she said.

She said she expects workers will receive their full allowances as decided by the government after the employers fill out the form.

“I think it can be implemented because companies want to get away from an obligation to pay workers money.

“But if they fail to fulfill the obligation of filling out the work suspension forms properly they will take responsibility for this problem. Workers participated in fulfilling their roles already since the ministry announced the collection of phone numbers,” she said.

Ministry spokesman Heng Sour said that as of mid-April more than 100 factories and enterprises had announced work suspensions citing a lack of raw materials or no orders for market exports.