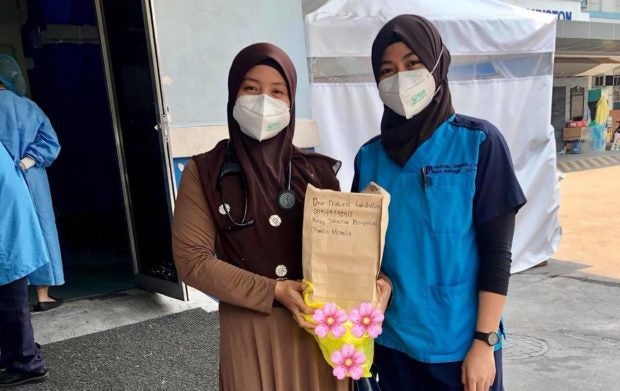 DELIVERY Dr. Sabdullah (left), together with a colleague, shows her order of halal food, which Muslim health workers in Metro Manila otherwise have difficulty ordering while on duty. —PHOTO COURTESY OF DR. PRINCESS HANNIFA SABDULLAH

MANILA, Philippines — Since late February, Mary Johnston Hospital in Tondo, Manila, has been the new home for Dr. Princess Hannifa Sabdullah, who has spent nearly all her waking hours on the front lines battling the new coronavirus disease (COVID-19).

The public health crisis is not the young doctor’s first brush with a deadly viral outbreak. In 2014, while working as an emergency room physician in Saudi Arabia, she took care of patients afflicted with the Middle East respiratory syndrome, an illness caused by a different strain of the coronavirus.

But back here in the country, while enduring a similarly trying time, Sabdullah, 36, faces a more personal challenge: finding halal food, which adheres to standards prescribed in the Quran.

“There were days when I was just eating potato chips and biscuits because there was no food that was allowed for me,” Sabdullah said. “But being doctors, despite not being able to feed ourselves properly, we have a Hippocratic oath to fulfill at all times.”

While food donations flooded hospitals over the past few weeks, Muslim medical workers found themselves in an awkward position. The packed food often contained pork or its derivatives, or had not been prepared according to Islamic rules.

This is the gap that Alzaky Foods is trying to fill as it steps in—providing free halal food to Sabdullah and other Muslim medical workers risking their lives to stop the outbreak, backed by the generosity of both Muslim and non-Muslim sponsors.

Based in San Juan City, Alzaky is the only company that provides halal-certified chicken meat in the country. In the time of COVID-19, it has turned into an important lifeline for Muslim health workers in Metro Manila, which has the highest number of confirmed cases in the country.

Many of these essential workers felt uneasy disclosing their personal food needs amid the pandemic, said Sittie Norhanie Lao, who volunteers to provide halal meals for Muslim health-care workers.

“They did not want to complain because it is a difficult time [for everybody] and they did not want to give the impression that they were demanding,” she said. “But it was heartbreaking to know that some of them were living off on crackers and water to sustain themselves.”

The project started after her aunt, Jalilah Lao, the company’s general manager, decided to cook for her former colleagues who now were working full-time on the front lines. Her 40-year-old aunt was a doctor but had stopped practicing to focus on the food business.

They made their first halal food delivery to Ospital ng Maynila Medical Center on March 20.

After learning about Alzaky’s efforts, hundreds of Muslim health workers, including those outside the health sector, began to reach out to them. Their messages came with personal stories of hardships on the front lines, and their food predicaments.

Since that delivery to Ospital ng Maynila, Alzaky has provided more than 2,400 halal meals to over 60 government and private hospitals across Metro Manila, including Philippine General Hospital, Makati Medical Center, Asian Hospital and Medical Center and East Avenue Medical Center.

Each meal features either chicken adobo, roast chicken or “pyaparan” (a Maranao chicken dish), paired with “kyuning,” or rice cooked in turmeric. The packed food can be kept for three days, if immediately frozen, and can be reheated in a microwave.

“Making sure our front-liners are fed well is just as important as providing personal protective equipment,” Lao said. “They would not function well if they keep on eating fast food every day.”

Alzaky shoulders part of the cost and has also received cash donations to support its work from both Muslim and non-Muslim individuals and groups.

One of their main challenges in helping their fellow Muslims, Lao said, was that they didn’t know how many Muslim health workers were there in Metro Manila and where they could be found.

“We primarily relied on social media to help us gather information,” she said.

So far, about 200 Muslim doctors, nurses and other medical workers have reached out to Alzaky to get halal food.

“We believe this number is meager, maybe only around 20 to 30 percent of the real number,” Lao said.

She hopes that both government and private organizations can help them gather the real number of Muslim health workers, not just in Metro Manila but in the whole country, so they can extend their help to more of their brothers and sisters.

“Our front-liners come from different cultural and religious backgrounds,” Lao said. “We believe it should not hinder them from performing their duties effectively. Neither do we believe that they have to sacrifice their religious beliefs to deliver on their duties.”

For Sabdullah and her six Muslim colleagues at Mary Johnston, Alzaky’s service is already a blessing.

“No doubt that their initiative is 101 percent essential for me,” she said. “It gives me the energy to continue being a front-liner.” INQ

(Those who wish to help can get in touch with Alzaky Foods on Facebook, or send their details via mobile at 09664163666 or 09163356400. Alzaky welcomes cash donations through deposits to their bank accounts, GCash and Paypal.)