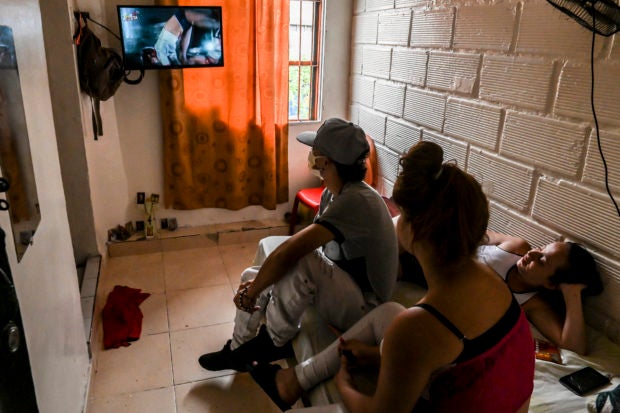 Sex worker Estefania watches TV with her friends in her bedroom in a low cost hotel in the Tolerance zone known as the Raudal Sector, where sex workers live and work in Medellin, Colombia, on April 8, 2020. AFP

Survival has become a struggle for Colombia’s sex workers during the coronavirus pandemic lockdown, as cupboards are bare and bills pile up.

Before the health emergency, they worked on the streets or in brothels in a country where sex work is legal. Now, with half of humanity in confinement and those places off limits, they are struggling on handouts and meager savings.

Neither will suffice, though, and many risk fines or even prison to break the lockdown. Worse still, they’re potentially exposing themselves to the virus, which has infected almost 3,500 Colombians and killed more than 150.

“I was in quarantine but I had to go and do a home visit,” Ana Maria told AFP.

“What can I do? I can’t die of hunger,” said the 46-year-old from Facatativa, a town 40 kilometers (25 miles) from the capital Bogota.

With a dwindling supply of gas for cooking, and no more fruits or vegetables in her pantry, she took a taxi to a client’s home for an encounter that would earn her $10.

The lockdown began on March 25 and Ana Maria said she had strictly complied until April 3 when she paid the home visit.

The quarantine is due to last until April 27 at least.

Sometimes she hears knocking at her door, usually a friend with hungry children.

Sometimes Fidelia Suarez’s cellphone rings at 2:00 am. On the other end of the line she hears the “desperate” voice of one of the 2,200 members of Colombia’s union of sex workers.

“We’re in a critical situation,” said Suarez, the union’s president.

“Some are on the brink of going hungry or of being turned out of their homes because they can’t pay the rent,” said Suarez, although officially there’s a ban on evictions during the lockdown.

Suarez spends her days delivering food to union members in Bogota but the requests outnumber the donations.

She’s furious with “the authorities’ indifference” and wants “concrete solutions” for the thousands of legal Colombian sex workers.

“They only remember us in times of politicking.”

There are more than 7,000 sex workers in Bogota, according to the 2017 census, said Diana Rodriguez, the district secretary for women.

“We’re taking action and joining forces so that those engaged in paid sexual activities and abiding to confinement in their homes will benefit” from subsidies of $30-$60, she said.

Rodriguez said most prostitutes the government has been in contact with are abiding with confinement.

Luz Amparo, 49, doesn’t want to infect herself, her two children and four grandchildren whom she lives with. The seven of them live off donations.

“I call friends (clients) but they don’t go out, they’re afraid,” she said.

Some 415 kilometers away in Medellin, Estefania needs money for food, rent for the tiny room she lives in, and to send to her three children.

“Today I have to go out to pay for the room. I owe two days… I don’t know how but I need to pay,” she said.

The room costs $5.40 a night but the landlord halved it due to the economic crisis caused by the pandemic.

Before the coronavirus arrived in Colombia, 29-year-old Estefania worked at night. In general, she provided services to three clients and went home with $50.

But there are no more clients in the downtown Medellin park she calls an office.

Now she heads out around midday trying to sell candy and drugs. She was almost caught by police.

She was counting down the days for the quarantine to end when the government tacked on an extra couple of weeks.

“I have to pay for a room, food — there are a lot of problems coming.”