HONG KONG — The arrests of more than a dozen high-profile opposition activists for allegedly organizing unlawful protests last year has sparked fears that demonstrators may take to the streets again, shattering the peace the city is enjoying.

Media tycoon Jimmy Lai, who owns Apple Daily, was arrested in the afternoon for organizing and participating in unlawful marches on Aug 18 and Oct 1, from Causeway Bay to Chater Road in Central.

Lai, along with two others arrested on Saturday, was previously charged with unlawful assembly in February.

The activists were detained for their alleged involvement in protests on Aug 18, Oct 1 and Oct 20 last year.

The police said at an afternoon briefing at Central Police Station that the case has been brought up for criminal proceedings and declined to give details.

Earlier in the day at the Legislative Council, the opposition camp accused the authorities of trying to silence dissent, acting on orders of Beijing. 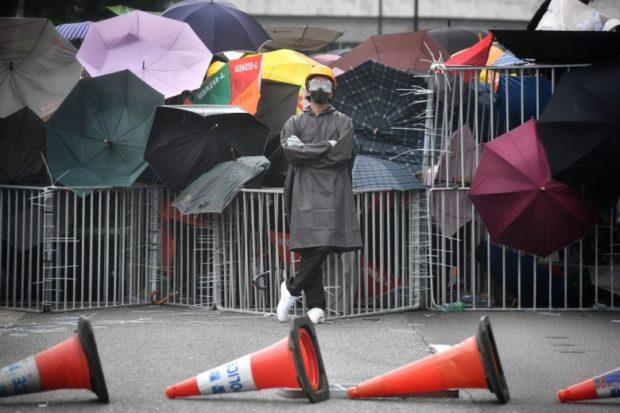 People hold up umbrellas during a protest rally in Hong Kong on July 14, 2019. The Straits Times/Asia News Network

Democratic Party chairman Wu Chi Wai, who vowed the pan-democrats would resist and fight back, said the arrests are an indication of how worried Beijing is that the pan-democrats will be politically stronger after September’s LegCo elections.

He said: “The timing is too much of a coincidence. In the past week, the liaison office, the Hong Kong and Macau Affairs Office, officials and political veterans have criticized us and warned us about national security issues.”

Earlier this week, the chief of the Beijing liaison office in Hong Kong Luo Huining reiterated calls for the territory to introduce national security legislation “as soon as possible” to combat radical violence, foreign interference and pro-independence forces. In a video message to mark National Security Education Day, he said the protests that plagued Hong Kong last year were orchestrated by pro-independence forces and violent radicals, which threaten national security and the “one country, two systems” principle.

Before Mr Luo’s comments, the Hong Kong and Macau Affairs Office issued a statement on Monday accusing opposition lawmakers of disrupting the normal workings of the council, and of abusing their power by delaying the election process for a House Committee chair. The House Committee has not had a chair for six months.

The pro-establishment camp on Saturday defended the arrests.

Lawmaker and former secretary for security Regina Ip called it an “overreaction” from the pan-democrats, adding that everyone is equal before the law. “Whether you are a celebrity, media boss, lawmaker or former lawmaker, there is no privilege or immunity.”

Last year, the authorities banned all three marches organized by the Civil Human Rights Front on Aug 18, Oct 1 and Oct 20. But the lawful gathering on Aug 18 turned into a march, after pro-democracy veterans led crowds onto the streets of Hong Kong Island. The front claimed more than 1.7 million people took part that day, while police put the estimate at 128,000.

Hong Kong was hit by unrest last year that spanned some seven months, but this cooled with the current pandemic.

The unrest, led initially by an opposition to the now-suspended extradition Bill, morphed into a pro-democracy movement with massive demonstrations over many weekends, many of which resulted in bloody clashes between the police and hard-line protesters.

Read Next
Nurse, 28, is first health worker positive of COVID-19 in Bicol
EDITORS' PICK
Give anti-terror law a chance, ditch misinformation – Defense Sec. Lorenzana
Smart releases Hyun Bin’s second TVC
Military on heightened alert in Maguindanao after BIFF attacks
For nation’s birthday, Trump slams the enemies within
EuroMillions Superdraw: A lottery draw unlike any other is coming to the Philippines
Water remains our saving grace right now
MOST READ
MIAA: International flights will resume July 8
Tesla sales boosted by entry-level sedan
2 carriers in South China Sea, US bares
As Ringo Starr turns 80, he talks about his life, Beatles journey, including that unfortunate Manila experience
Don't miss out on the latest news and information.