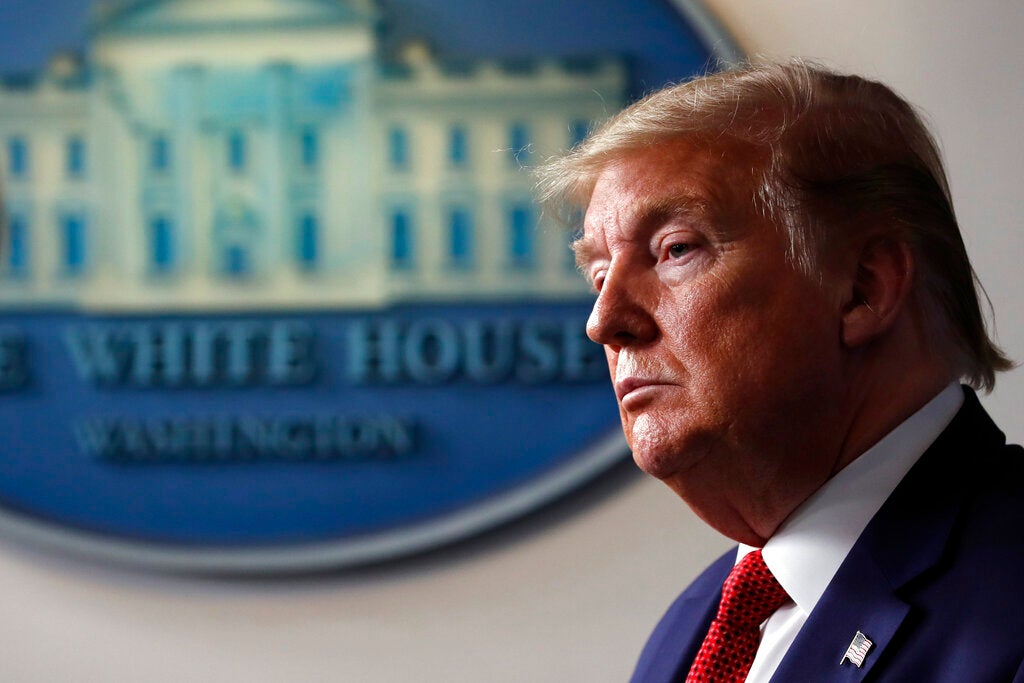 CHICAGO — President Donald Trump’s guidelines for states to reopen their economies had the hallmarks of a permission structure. But what he really created was a blame structure.

On Friday, he emphatically embraced protesters who defied the orders of their states’ governors to restrict movement and large gatherings to combat the coronavirus pandemic.

Less than 24 hours before, he had given governors a metrics-driven guide to make their own decisions. But he did it in a way that also pushes responsibility to the states, giving him a way to shift the blame if things go badly. And he pushed to dump the ongoing problem of a shortage of testing for the virus in the governors’ laps as well.

It fits a familiar pattern for Trump: claim credit for what’s going well, find a fall guy for what’s not.

In making the case that large swaths of the country can safely ease restrictions under the new guidelines, Trump also found a way out of his constitutionally questionable assertions that he had “total authority” to decide how the states return to a semblance of normalcy.

He couldn’t have been more explicit in casting the need for expanded screening for the virus — something that public health experts say is necessary before Americans can get back to normal life — as the governors’ problem.

“The States have to step up their TESTING!” Trump declared on Twitter on Friday.

New York Gov. Andrew Cuomo, a Democrat, was having none of that.

He said Trump had passed the buck to the governors “without passing the bucks” for states to do what’s needed. His state has been the hardest hit in the nation, with more than 14,000 virus-related deaths.

“We cannot do this without the federal government,” Cuomo said.

If there was any doubt about how quickly Trump wants the economy firing on all cylinders, he dispelled it with a trio of tweets saying to “LIBERATE” Michigan, Minnesota and Virginia — all states with Democratic governors. In effect, he was egging on protesters resisting the governors’ stay-at-home restrictions.

He was liberal in identifying foes, He slammed presumptive Democratic presidential nominee Joe Biden over the Obama administration’s handling of the H1N1 flu outbreak. And he jabbed at Cuomo, whom he’s alternately praised and lambasted throughout the crisis.

“Governor Cuomo should spend more time ‘doing’ and less time ‘complaining’. Get out there and get the job done,” Trump tweeted.

Trump’s eagerness to revive the economy — a key part of his reelection strategy — was evident in the evolution of the guidelines issued by the White House.

The final guidance doesn’t go as far as what the Centers for Disease Control and Prevention had recommended to the White House last week.

The CDC, according to a draft of the recommendations obtained by the AP, talked about using more specific criteria and in many cases looking for improvement over longer periods of time, before easing restrictions in high-transmission areas. Examples include wanting to see sustained reductions over 30 days in positive tests for coronavirus, and sustained reductions over 15 days in numbers of coronavirus deaths. Under Trump’s guidelines, a state would have to see a decline in documented COVID-19 cases over 14 days.

The dilemma for states is clear.

Dr. Tom Frieden, the former CDC director, said testing needs “to increase by a factor of three to as much as a factor of 20” from the current rate of about 150,000 tests being conducted each day. Even without adequate testing, though, Trump in part justified his road map for relaxing social distancing by arguing that cases have peaked in the United States.

Some experts say available data seems to suggest that a national peak has been reached, but the situation differs from city to city and state to state. Others say it’s not yet clear there’s been a peak anywhere.

“From the places I know about, the data are not definitive that we are peaking,” said Marc Lipsitch, a Harvard University epidemiologist.

Trump’s push to deflect the crisis to the doorstep of governors comes as the weight of a sinking economy has begun to complicate his reelection effort. A new Pew Research Center survey found that 65% of respondents believed Trump responded too slowly to address the threat of the coronavirus outbreak in the U.S.

The lack of a national testing strategy will increase the chances for prolonged deadly waves of the disease to emerge in the months ahead, said Lawrence Gostin, a public health expert at Georgetown University.

“It’s impossible to get to the place where we want to be without a national testing strategy,” Gostin said. “With a state-by-state approach, it can’t possibly work.”

Trump boasts that his administration has paved the way for 3.5 million tests nationwide — more than any other nation. But the U.S. lags several nations in testing on a per capita basis, including Germany and South Korea. The president counters that “areas of our country that have been hotspots have done much more.”

Indeed, in New York, more than 550,000 tests have been administered.

But Cuomo said in a state of 19 million residents and 9 million working people, getting people back to work safely will require far more testing. Complicating matters, Cuomo said, is that states, the federal government and private sector are competing against one another to acquire testing.

“The federal government cannot wipe their hands of this and say, ‘’Oh the states are responsible for testing,’” Cuomo said.

But that’s exactly what Trump has in mind.

Drs. Deborah Birx and Anthony Fauci, the top medical experts on the White House coronavirus task force, say the “new normal” in American life will look much different for some time. But Trump scoffs at the idea of an America where restaurants aren’t packed with diners or big stadium events are left half empty in the name of social distancing.

But Gostin, the Georgetown expert, said it’s not realistic that the country will return to such normalcy soon.

“The president”s guidance is not entirely irresponsible,” Gostin said. “It’s also not a national plan.”