The whole of Sitio Zapatera, home to about 10,000 people, is ‘presumed to be contaminated’
By: Ador Vincent Mayol, Dale Israel, Nestle Semilla - @inquirerdotnet
Philippine Daily Inquirer / 04:10 AM April 18, 2020 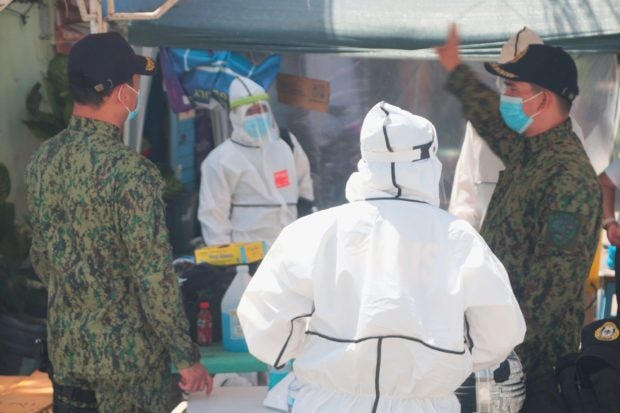 GETTING READY Health officers and policemen discuss how to conduct the massive testing at Sitio Zapatera in Barangay Luz, Cebu City, after the village was placed on total lockdown on Friday. —PHOTO COURTESY OF CEBU CITY PUBLIC INFORMATION OFFICE

CEBU CITY— The city government here has sealed with armored personnel carriers (APCs) and police vehicles the densely populated Barangay Luz, which was placed on total lockdown after confirmed virus cases in one of its sitios surged to over a hundred.

Cebu City Mayor Edgardo Labella, on Friday, also ordered massive testing in Sitio Zapatera, where all of its about 10,000 residents were already presumed to be contaminated by the new coronavirus disease (COVID-19).

“There’s an ongoing massive testing there (Zapatera) and it will continue in the coming days to include other sitios in Barangay Luz. We’re hoping for the best but we’re also preparing for the worst,” he said, adding that the city government already provided P2 million to the village so it could cater to the needs of its constituents.

Labella has placed the entire Barangay Luz on total lockdown on Friday, disallowing all residents to leave the village, including those who have quarantine passes. At least 47 policemen, aided by two armored personnel carriers from the Armed Forces of Philippines, were deployed in Barangay Luz to ensure residents would stay inside their homes.

Persons who are asymptomatic, he said, will be transferred to quarantine facilities while those who display symptoms of COVID-19 will be brought to the Cebu City Medical Center for treatment.

Dr. Jaime Bernadas, director of the Department of Health in Central Visayas, and Cebu City Health Officer Dr. Daisy Villa said on Thursday that Sitio Zapatera was already “presumed contaminated” with COVID-19 and that there was no need to test other residents.

But Labella ordered the continuation of mass testing after an appeal was made by Barangay Luz Captain Ronilio Sab-a: “Please stop generalizing us by saying the sitio is already contaminated by the virus.”

Barangay Luz is an urban poor village in uptown Cebu City where houses are built close to each other. It is located close to the city’s financial hub. It has been put on a lockdown on April 12 after three residents tested positive of COVID-19. The number of afflicted Zapatera residents ballooned to 135 after 82 more residents tested positive for COVID-19 as of 3 p.m. on Friday. The number was about 85 percent of the total 161 cases in Cebu City.

Barangay Luz has a population of about 23,000. Some of its residents live in boarding houses and work at the nearby Cebu Business Park and Cebu I.T. Park.

BARRICADE Armored personnel carriers are sent by the military to assist the police in implementing the total lockdown of Barangay Luz, Cebu City, on April 17. —PHOTO FROM EDGAR LABELLA’S FACEBOOK PAGE

Meanwhile, 37 persons previously stranded in Cebu and allowed to travel home to Zamboanga Sibugay province in Mindanao were held for quarantine in Ipil town, the province’s capital.

Their arrival on Thursday caused a stir in the province, especially following reports of the surge in COVID-19 cases in Cebu City. Five of the arrivals lived in Barangay Luz, the current epicenter of the infection in the city.

On Thursday morning, they were fetched by an ambulance and two other vehicles at the Dipolog port, and traveled straight to Zamboanga Sibugay. However, personnel at the quarantine checkpoint in Titay town, at the border between Zamboanga Sibugay and Zamboanga del Norte, refused them entry as they didn’t have quarantine passes. Checkpoint personnel also did not know about the circumstances of their travel, hence, they had to pass the night at the border. The local government of Titay provided them food.

On Friday, the 37 persons were brought to the provincial hospital compound at Barangay Tenan of Ipil to be quarantined.

In Bataan province, Gov. Albert Garcia on Thursday locked down the Bataan General Hospital and Medical Center in Balanga City following reports that 29 doctors, nurses and nursing attendants there were found positive for COVID-19. The new cases raised the number of patients in Bataan to 56. —WITH REPORTS FROM RYAN ROSAURO, GREG REFRACCION, ARMAND GALANG AND YOLANDA SOTELO