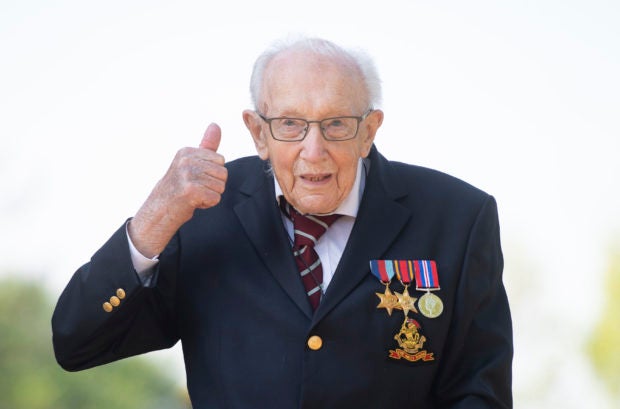 99-year-old war veteran Captain Tom Moore poses for a photo at his home in Marston Moretaine, England, after he achieved his goal of 100 laps of his garden. Image: Joe Giddens/PA via AP

LONDON—A 99-year-old World War II veteran has completed his quest to walk 100 laps of his garden in eastern England and raised 13 million pounds or $16 million (over P821.98 million) for Britain’s National Health Service.

Tom Moore’s humble mission to support healthcare workers during the coronavirus pandemic became a national rallying point. Tens of thousands of Britons pledged donations as Moore pursued a goal of finishing the laps before his 100th birthday on April 30.

With the aid of a walking frame, he reached his target Thursday. Nine soldiers from the Yorkshire Regiment, a unit linked to Moore’s former British army regiment, lined the paved walkway in his Bedfordshire backyard, forming an honor guard for the veteran’s final laps.

He added that health workers on the front line “deserve everything we can give them.”

Moore started the fundraiser as a way to thank the doctors and nurses who cared for him after he broke his hip. His family initially set a target of raising 1,000 pounds. The campaign went viral after Moore appeared on national television, and millions were raised within a week.

“Tom has captured the heart of the nation with his heroic efforts,” Johnson’s spokesman James Slack said.

Prince William has also written to Moore and made an undisclosed donation, Kensington Palace said.

Moore’s daughter Hannah said her father had become “a beacon of hope for people” during challenging times. She described the donations as “beyond words.”

Moore trained as a civil engineer before enlisting in the army during World War II. He rose to the rank of captain and served in India and Burma.

The online fundraising platform JustGiving said Moore’s campaign created the largest donation the site has ever made. CL /ra

93-year-old woman requests for ‘more beer,’ gets 150 cans delivered to her home

LOOK: Police officer gets groceries for 87-year-old woman unable to shop amid COVID-19