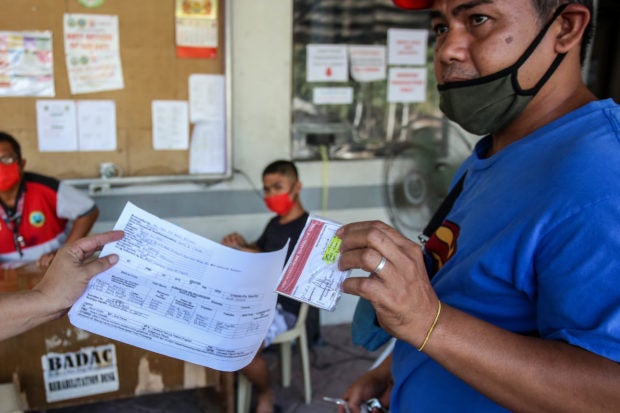 PAPERWORK Impoverished residents of a barangay in San Jose del Monte, Bulacan province, hand in forms for aid in this photo taken on April 4. Local authorities use the forms to identify residents qualified to receive cash handouts under the national government’s financial assistance program for people badly hit by lockdown measures introduced to stem the spread of the new coronavirus in the country. (Photo by JAM STA. ROSA / Philippine Daily Inquirer)

MANILA, Philippines — The Department of Social Welfare and Development (DSWD) on Wednesday asked local governments to realign funds to help impoverished residents who are qualified for financial aid but are not on its list of beneficiaries of lockdown assistance.

In an “appeal to the nation,” the DSWD said all elected officials had to work together to give aid to the most vulnerable.

“May we request the mayors and their councils to look into their councils’ finances, savings, programmed projects for the year that … can be deferred, and other possible sources of funds that are available to them, which can be used to fill … the gap of their additional beneficiaries being requested from the DSWD so that they can come up with the same amount as dictated by the regional wage rates in their area[s] in an amelioration program of their city or municipality,” it said.

Earlier, President Rodrigo Duterte designated the DSWD as the sole agency for the distribution of aid to impoverished citizens who lost their livelihood when he placed the entire island of Luzon on lockdown to contain the spread of the new coronavirus in the Philippines.

But in its appeal, the department said the coronavirus pandemic “calls for unity, brotherhood, sisterhood and healing as one nation.”

Congress passed in March a coronavirus response law giving Duterte up to P200 billion to give as cash handouts to poor families badly hit by his stay-at-home orders. Under the law, the beneficiaries would receive P5,000 to P8,000 a month for two months based on the minimum wage rate in their regions.

Lawmakers also called on the government to extend assistance to the middle class, but the DSWD, in its appeal, said its priority was the poor, whom it described as “born on the other side of the tracks” — a reference to slums along railroads in Metro Manila.

“Some of them are trying to get out of that bondage. Let’s help them survive this crisis,” the DSWD said.

There was no immediate response from any local government.

Earlier, some of them complained about a “quota system” imposed by the DSWD in distributing aid.

The agency, however, said it wasn’t a quota system it had but “indicative target beneficiaries” in every town and city. Under this system, local governments will be given a fixed amount for distribution set according to Department of Finance data from the 2015 census.

But the mayors said the DSWD list did not cover all needy families in their jurisdictions, and that the number of beneficiaries on the list was even “reduced.”

In its appeal on Wednesday, the DSWD said local officials, including barangay officials, should submit their lists of beneficiaries “as soon as possible” so it could distribute the cash handouts.

As of 4 p.m. on Wednesday, according to the department’s spokesperson, Irene Dumlao, 172,357 low-income families nationwide had received P929 million in cash aid from the agency.

Dumlao said the DSWD had also reached agreements with local governments, excluding the Bangsamoro Autonomous Region in Muslim Mindanao, and transferred to 95 of them P58.58 billion as of Wednesday afternoon.

The local governments will distribute the aid with help from DSWD field officers, she said.