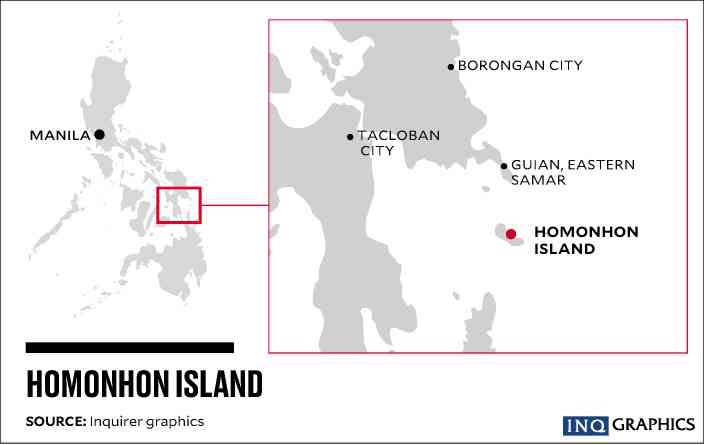 Officials of Eastern Samar province have appealed to Environment Secretary Roy Cimatu to stop a foreign vessel from loading chromite ore worth P61 million off Homonhon Island in Guiuan town amid fears of the spread of the new coronavirus disease (COVID-19).

Gov. Ben Evardone said the province, under a general community quarantine, prohibited the entry of any local or foreign vessel to ensure the safety of residents.

“Our province has done all possible measures to protect our people from this disease and yet this mining operation has given Estehanons anxiety and fear over the possibility that all our efforts to prevent this disease from entering our province will go down the drain,” Evardone said in a letter to Cimatu on April 14.

The provincial board and the municipal council of Guiuan, as well as the village councils of Homonhon, have passed separate resolutions opposing the loading of chromite ore on the island.

Borongan Bishop Crispin Varquez also wrote the regional office of the Mines and Geosciences Bureau (MGB) in Eastern Visayas expressing his opposition to any loading activities by the MV VW Peace, with a crew composed of 13 Chinese and four Myanmar nationals.

His April 13 letter was addressed to Leo Van Juguan, the MGB regional director.

“In behalf of the Diocese of Borongan, I would like to manifest our collective position that we are opposing any mining operation, including the loading and exporting of mineral ore, on Homonhon Island by Techiron Resources Inc. … This collective stand is based on the principle of general welfare, health and safety of our people in the province of Eastern Samar, particularly our people in Homonhon,” Varquez said.

Juguan said his office had allowed the loading of chromite ore by the foreign vessel for transport to China. Loading, he said, started on Tuesday afternoon. The vessel arrived in Guiuan on April 4.

At first, Juguan said, he was instructed by Cimatu to delay loading activities due to the general community quarantine in the province. He was eventually authorized to allow these as long as the necessary guidelines and protocols would be strictly followed by Techiron Resources.

The DENR on Wednesday assured Eastern Samar residents that measures were being undertaken to ensure their safety.

The regional MGB lifted the suspension order on April 11, citing the conditions imposed by the Inter-Agency Task Force (IATF-EID) on Emerging Infectious Diseases and by the Department of Trade and Industry that there would be unimpeded movement for all types of cargo and that export companies would be allowed to continue their operations while observing necessary measures, such as social distancing.

According to Wilfredo Moncano, acting national director of the MGB, other protocols must be implemented, including the required quarantine for the crew of MV VW Peace, who are not allowed to disembark the vessel and have physical contact with residents or stevedores.

“The regional offices of the MGB and the DENR have the say if all requisites are complied with, being the ones on the ground,” Moncano said.

Environment Undersecretary Benny Antiporda said there was no reason to stop the operations, considering that Techiron Resources was able to comply with the requirements.

“They are not given any special permit. This is a regular operation,” he said in an interview. “We cannot hamper such operation now because we need this as a source of income for the country.”

Juguan said MV VW Peace would not be allowed to dock at the port in Barangay Pagbabangan and should instead drop anchor 1.5 kilometers away. He said a barge should load the mineral from Homonhon to MV VW Peace. Also, no crew member of the foreign vessel will be allowed to disembark.

“[And] there will be no contact between the crew of the mother vessel and the [stevedores] of the barge since the loading will use clamshells or grabs,” Juguan said.

He said those who would load the mineral would wear personal protective equipment while stevedores were asked to follow physical distancing policy. The loading would last for two days.

But Governor Evardone hoped that Cimatu would heed their request and disallow the Panamanian-registered vessel from loading an estimated 7,000 metric tons of chromite ore.