Brace for ‘new normal’: War vs COVID-19 ain’t over even if lockdown ends

MANILA, Philippines — Wearing of face mask and social distancing might carry on as the “new normal” even after the enhanced community quarantine is lifted by April 30.

This was the fearless forecast of former Health Secretary Manuel Dayrit as he asserted that the battle against the novel coronavirus or SARS-CoV-2, which causes COVID-19, would be far from over even if the strict quarantine is removed.

And this is what the public should understand, he said. 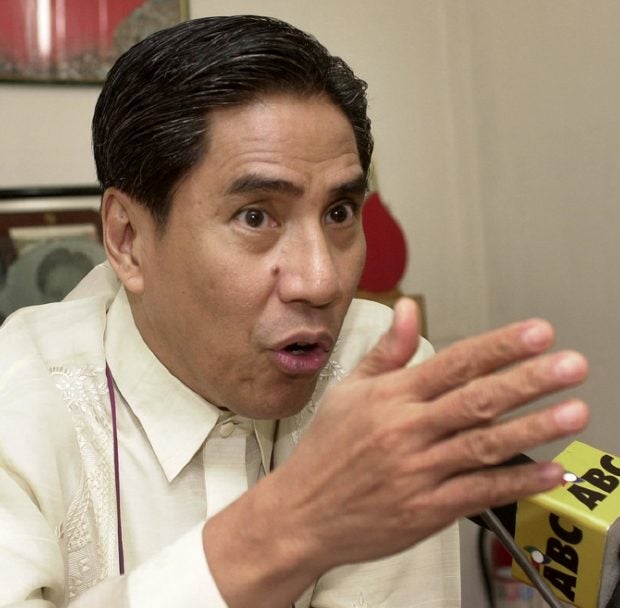 “We are looking at a situation that can go beyond this year to several years later. Unluckily, this is our state. I don’t think people understand that,” noted Dayrit, who spearheaded the country’s successful battle against the severe acute respiratory disease (SARS) in 2003.

“I think people think that okay we have ECQ [now], pagtapos ng April 30 balik tayo sa dati. Hindi na (after April 30, we will return to normal. That’s not the case),” he further told INQUIRER.net in a phone interview.

President Rodrigo Duterte has placed all of Luzon under an enhanced community quarantine in March as the number of people infected with the new virus swells. The lockdown was supposed to end mid-April but Duterte extended it until April 30.

According to Dayrit, the fight against the COVID-19 pandemic will only end once a vaccine to prevent SARS-CoV-2 becomes available.

Dayrit warned that if the quarantine is fully lifted too soon, the second wave of virus infections would likely emerge.

The former health secretary explained that the enhanced community quarantine across Luzon has given the country an opportunity to at least “lengthen the doubling time” of the coronavirus transmission.

“Instead of an infected person transmitting to three or four people, they were maybe only transmitting to one or 1.5 [people]. Or another way of putting it is instead of the number of cases doubling every three days, our talking time now is about five to six days,” Dayrit said.

“If you lift the ECQ and it’s still the same situation, within four weeks to six weeks, we’ll probably have a doubling time within two to three days. Magba-bounce back lang (It will just bounce back),” he added.

And so, the question now is: Are there any indicators to say that the quarantine can now be totally lifted?

Dayrit thinks the indicator is when there is “no more viruses transmitting everywhere.”

“If the virus exists in any part of the world, particularly if there is international travel, you cannot go to a free-COVID-19 state,” Dayrit said.

So far, there is no decision yet on whether the enhanced community quarantine will be further extended, eased, or fully lifted.

Regardless, the government will still face more issues concerning other sectors.

While the COVID-19 epidemic in the country is a public health matter, economy and livelihood were likewise battered by the virus.

Ryan Rogacion, an owner of a small bakery in the city of Manila, said the effects of the pandemic —particularly the imposition of the lockdown —may not have reflected in their sales, but it has definitely affected their production. 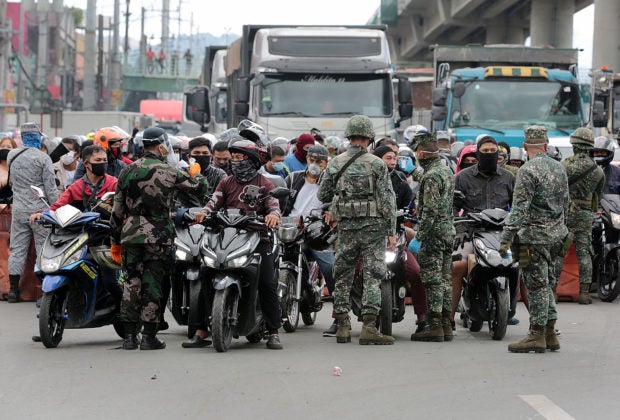 In a phone interview with INQUIRER.net, Rogacion said that due to the quarantine, it has been difficult to transport their raw ingredients. This, he noted, increased their production cost in the process even if prices of their bread remain the same.

(Before you release the supply, it’s hard. Expenses increase but the price of bread does not increase. Access is hard, how do we get our ingredients?)

Rogacion was also concerned about his 11 staff who serve as bakers, vendors, and cleaners.

(We can choose to not operate. But in small businesses like ours, our employees only rely on us, too.)

Rogacion was among the many owners of small businesses who are calling on the government for help – to at least give them support during the crisis even if it’s just in the form of sustaining the salary of their employees.

(If there is assistance, we can opt not to operate also for the safety of our employees while at the same time, they are secure that they have money they can spend. They will receive money so that it does not feel like half of their feet are buried.)

(For us businessmen, it’s okay if we do not earn as long as our employees continue to receive assistance for their food.)

Other sectors affected, too

The imposition of the quarantine has also displaced many workers as many businesses suspend their operations to comply with the lockdown protocols.

According to President Rodrigo Duterte’s third report to Congress, more than 286,000 workers have already been assisted by the Department of Labor and Employment (DOLE). However, many workers were still clamoring for aid saying they have yet to receive assistance from the government. 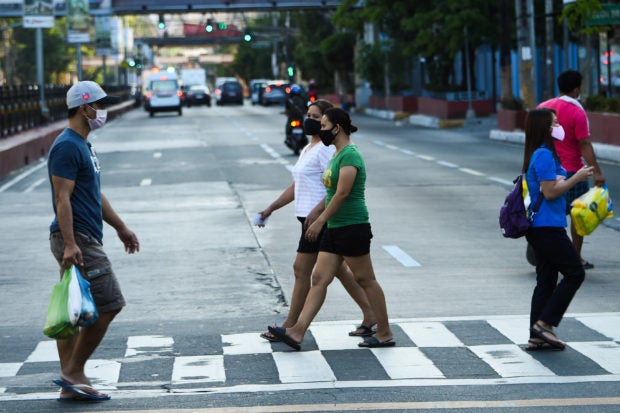 Residents wearing facemasks cross a street after the government imposed an enhanced quarantine as a preventive measure against the COVID-19 novel coronavirus in Manila on March 25, 2020. (Photo by Ted ALJIBE / AFP)

Likewise, many low-income households were still awaiting the cash subsidy from the national government under its social amelioration program.

In the education sector, the enhanced community quarantine has also led to the suspension of classes, with the Department of Education (DepEd) even postponing graduation rites in elementary and high school levels.

Moreover, the pandemic appeared to have altered the way Catholics observed the Holy Week in the Philippines – the bastion of Christianity in Asia.

Issues on mental health also surfaced during the pandemic, with international groups and institutions such as the World Health Organization (WHO) and the Centers for Disease Control and Prevention (CDC) of the United States recognizing that the crisis has brought stress on a global scale to populations wary of getting infected, among others.

In an earlier interview with INQUIRER.net, Dr. Rowalt Alibudbud, a psychiatrist for a nongovernment organization based in Makati City, said that previous studies have shown that placing people under quarantine could trigger their fears and anxiety.

“A lot of my patients are contacting me because, for one, it is hard to get medication. Secondly, they feel suffocated inside their rooms. They feel bored which is related to possible triggers to a mental health disorder,” Alibudbud said.

The disease, in itself, is not the sole cause of stress at this time as other social factors could also serve as a trigger, pointed out Albudbud.

For instance, Alibudbud said many people worry about their financial state during the quarantine and the most vulnerable are those in poor communities particularly those in the informal sector.

“If you are on quarantine, you cannot work therefore you do not have money. That is another stressor,” Alibudbud said. 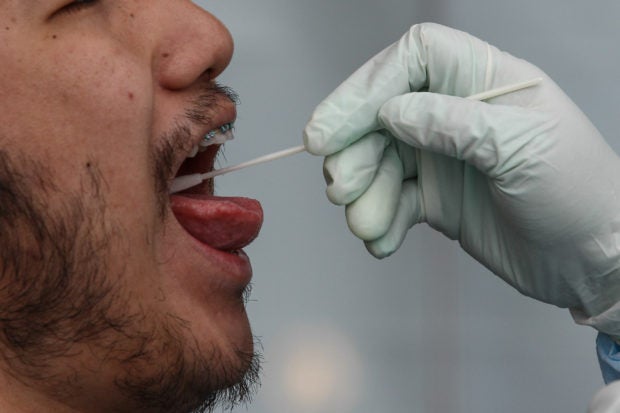 SAY AHH A laboratory technician gets a swab test in a hospital at Santa Rosa, Laguna province, on Tuesday, April 14, 2020, under a mandatory test program for health workers who have been exposed to coronavirus patients. The government has launched an aggressive mass testing program to locate as many as 15,000 possible carriers of the virus that causes COVID-19. —EARVIN PERIAS

As of April 15, the number of people who have contracted COVID-19 in the country has surged to 5,453, including 349 fatalities.

Cabinet Secretary Karlo Nograles, spokesman of the Inter-Agency Task Force (IATF) for the Management of Emerging Infectious Diseases, said Wednesday that government is slowly fine-tuning its “gameplan” after April 30.

Nograles also said IATF is still in the process of collecting data to craft the government’s next steps against the COVID-19 outbreak.

“The thing is to do what should be done, that’s the recommendation. To do the things that have to be done well,” Dayrit said.

“Kung magma-mass testing ka (If you would do mass testing), do it well. Wrap it up. Do it well. Kasi ang problema natin ‘yung execution (Because our problem is the execution),” Dayrit added.