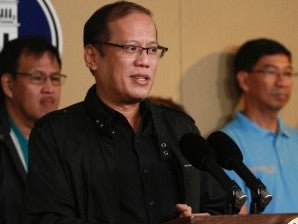 After 22 grueling hours, it left a spent army of devotees slumped on the pavement, Church leaders pondering what had become of their flock, and the government patting itself on the back for thwarting an alleged terrorist plot.

This year’s procession of the Black Nazarene of Quiapo entered the books as the longest in the history of the 17th century icon—thanks, or no thanks, to some broken wheels and the refusal of diehard believers to take shortcuts.

The statue was paraded starting at Quirino Grandstand in Manila at 8 a.m. on Monday and returned to its home at Quiapo Church at 6:11 a.m. Tuesday, inching its way through a swarm of pilgrims down a 5-kilometer route in the city’s central enclaves.

Organizers mainly traced the unprecedented delay to the Nazarene’s carriage stalling early in the procession, when two of its wheels broke under the sheer crush of devotees trying to mount it. By late afternoon, all the wheels had been damaged and devotees could only move the carriage by lifting it off the ground.

The procession could have been cut short by at least seven hours had the devotees agreed late Monday night to skip parts of the original route and  take a shorter way to Quiapo, as suggested by police and parish officials.

But the predominantly male crowd angrily rejected the suggestion. For about an hour, at the corner of Palanca and Villalobos Streets, the religious ritual morphed into a tug of war—with   the Nazarene caught in the middle—between the marshals who favored the shortcut and the diehard devotees who wanted to stick to tradition.

About 200,000 devotees—out of the estimated  8 million who flocked to Manila for the procession—welcomed the statue’s arrival at Quiapo Church. Many were forced to wait it out and sleep on the sidewalks and storefronts around the church.

President Benigno Aquino III, who on Sunday warned that terrorists were targeting the feast and ordered tighter security in the area, yesterday thanked the police, the military and the intelligence community “for our successful operation.”

“Also laudable was the way our people followed our instructions to ensure the safety of all,” Mr. Aquino said in a speech during the installation ceremony at Villamor Air Base for the new Philippine Air Force chief, Lieutenant General Lauro Catalino de la Cruz.

“Like the preparations we showed in the past two days, you can expect that the government would remain on the alert every minute to watch the welfare, right and livelihood of every Filipino,” he said.

In a briefing, presidential spokesperson Edwin Lacierda said the government continued to pursue a group believed to be composed of “bomb experts” based in Mindanao.

He did not give further details, except to say that this group may have been forced to “go underground” because of the warning issued by the President on the eve of the Quiapo procession.

Lacierda also defended the security precautions taken by the government, including the decision to ask telecommunication companies to shut down mobile phone signals in the procession area lest terrorists use phones as triggering devices for bombs.

“This is a situation where we believe that the government acted prudently, acted promptly on credible threats,” he told reporters.

Asked whether the government would resort to the same measures again, Lacierda said it would depend “on what is presented to us or to the intelligence community.”

As to criticisms that the government overreacted to the supposed terror threat, the Palace spokesperson said: “Would you rather have casualties? We did what we have decided as prudent at that point. And a statement (like that), that it was an overreaction, is always ‘hindsight 20-20.’”

A Catholic priest in charge of the procession admitted that the devotees displayed an “excess of fanaticism that needs to be corrected.”

“It’s our task to slowly form and educate the faithful about their devotion and the right way of expressing such devotion that will not harm themselves and others,” said Msgr. Clemente Ignacio, rector of the Minor Basilica of the Black Nazarene in Quiapo.

“We admit that there were elements or excess of fanaticism that needs to be corrected but we also saw from them yesterday the seed of their deepening devotion,” Ignacio said in a phone interview.

“I understand their very strong desire to touch the Black Nazarene. That’s their way of expressing their faith,” he said, referring to devotees who risked injury just to get near the image.

Over Church-run Radio Veritas, Novaliches Bishop Emeritus Teodoro Bacani Jr. said the Church must make the devotees realize that it was only through deep faith—and not through towels or handkerchiefs—that they could touch Jesus Christ.

“The Church must focus on catechesis because it’s not good that people are getting hurt during the procession,” Bacani said.

“They must be taught that they don’t need to jostle their way up to the carriage just to touch the image of the Black Nazarene. It’s not the touch of the hand that matters but touching the Lord through their faith.”

Defense Secretary Voltaire Gazmin on Tuesday clarified that the government had “not downgraded” the terror alert level.

“We’re continuing the operations to locate (the terror suspects). We could not be sure yet,” he said.

On Monday, Gazmin said security agents were tracking six to nine members of an “extremist group” from Mindanao who arrived in Metro Manila in August last year possibly to stage a bomb attack.

“This is not an ordinary threat because the suspects were sighted and they have the intention (to stage a terrorist attack),” the defense secretary said, without giving details about the suspects’ identities, affiliation or capabilities.

“Our men are following up leads … so that even after the festivities (in Quiapo) the operations are ongoing to capture the suspects,” he said. “We will not stop until we capture these suspects.”

Also on Tuesday, the Philippine National Police said it was maintaining its full alert status in Metro Manila.

But Interior Secretary Jesse M. Robredo said he believed that the threat had passed following the raids conducted by police on suspected terrorist lairs on Sunday and Monday. The raids, though, yielded negative results.

“The downgrading of the alert status will formally come from the PNP, but because the (feast) is over, we don’t want the citizens to be alarmed by the prevailing high alert,” he said.

He also explained that previous intelligence reports indicating a possible terror threat were not specific to the Black Nazarene procession, but that recent assessments made by government experts pointed to the procession as the most likely target of an attack. 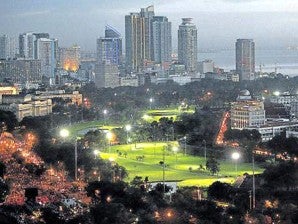 PASSION AND SERENITY Hundreds of thousands of maroon-clad Black Nazarene devotees pass by the greens of the Intramuros Golf Course on Monday night during the procession that lasted 22 hours. At the back is the skyline of Manila’s Ermita district. LYN RILLON

Mr. Aquino’s warning sparked one of the most elaborate security deployments for an event in the capital in recent years. About 15,000 policemen, backed by hundreds of army troops,

secured the procession route, while Air Force helicopters stood by.

Police estimated 8 million people attended the feast centered on the cross-bearing statue of Jesus Christ, which is believed to have healing powers.

Devotees waving handkerchiefs and towels let out shouts of “Viva!” as the statue was finally brought inside the church at the end of the grueling procession.

The Philippine Red Cross said it had treated 569 devotees as of Tuesday morning for minor injuries, exhaustion or dehydration.

The Manila Police District (MPD) said the only security issues it encountered during the procession came from a handful of pickpockets—and an abandoned, suspicious looking box left outside Quiapo Church on Monday morning. The box later turned out to contain nothing but kalamay (a rice delicacy).

Read Next
Prosecutors: Corona may have doctored SALN
EDITORS' PICK
Look Through: The fate of impounded stray dogs
House energy committee chair Arroyo bats for cheap electricity
What to watch out for when selecting a video surveillance solution
23,000 cops to be deployed nationwide for school reopening
Unleash the photographer in you this World Photography Day with vivo smartphones
DOH says COVID-19 cases plateauing, but public shouldn’t be ‘complacent’
MOST READ
Korina Sanchez reunites with former ABS-CBN co-anchors Julius Babao, Cheryl Cosim
Sharon Cuneta asks for prayers for friend in ICU who suffered silent stroke
QC school’s shutdown violated rules – CHEd
Light therapy could be the answer to your sleep problems
Don't miss out on the latest news and information.