The Inter-agency Task Force (IATF) for the Management of Emerging Infectious Disease made the announcement onTuesday as it noted that the laboratory-based PCR will remain to be the “gold standard” of testing.

“Ang decision kagabi ni Pangulo is number one, we will use both in conjunction. Parang dual testing na tayo,” IATF spokesperson and Cabinet Secretary Karlo Nograles said in a virtual briefing.

(The President’s decision last night is to use both in conjunction. It’s like we’re conducting dual testing.) 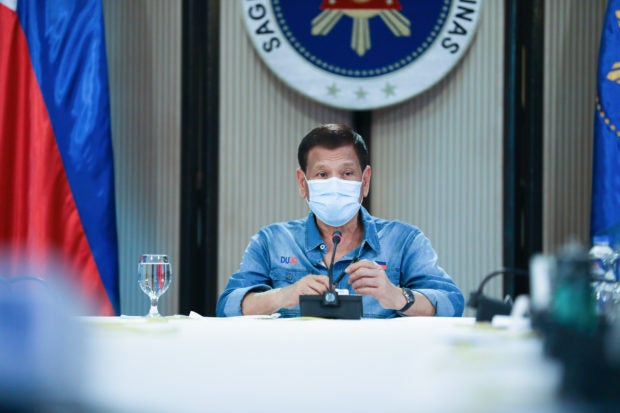 President Rodrigo Roa Duterte holds a meeting with some members of the Inter-Agency Task Force on the Emerging Infectious Diseases (IATF-EID) at the Malago Clubhouse in Malacañang on April 13, 2020. KARL NORMAN ALONZO/PRESIDENTIAL PHOTO

(We have a protocol on who may conduct the rapid test but the gold standard remains to be the lab-based test.)

Physicians must conduct the rapid test and there should be a confirmatory test with a PCR machine, Nograles said.

“Kasama sa protocols na yan, it has to be administered by a physician o doctor lamang ang pwedeng guamwa nyan,” he said.

(Included in these protocols is that it should be administered by a physician or a doctor can only conduct the test.)

(Number two, there must be a confirmatory test in the PCR lab. That’s the swabbing of the nose and the throat which will be brought to a laboratory to test and confirm.)

According to the President’s third weekly report to Congress, 26,000 locally developed COVID-19 real-time reverse transcriptase polymerase chain reaction (RT-PCR) kits are ready for delivery upon approval from the Food and Drug Administration.

The said kits were developed by scientists from the Philippine Genome Center (LGC) and the University of the Philippines (UP) – National Institutes of Health (NIH).

The Department of Health (DOH) earlier rejected the use of rapid test kits, saying it would stick to the PCR process.

The Philippines has so far recorded 4,932 cases of COVID-19 with 315 fatalities.