Guam worries as sailors from virus-hit ship take over hotels

HONOLULU  — People in Guam are used to a constant U.S. military presence on the strategic Pacific island, but some are nervous as hundreds of sailors from a coronavirus-stricken Navy aircraft carrier flood into hotels for quarantine. Officials insist they have enforced strict safety measures. 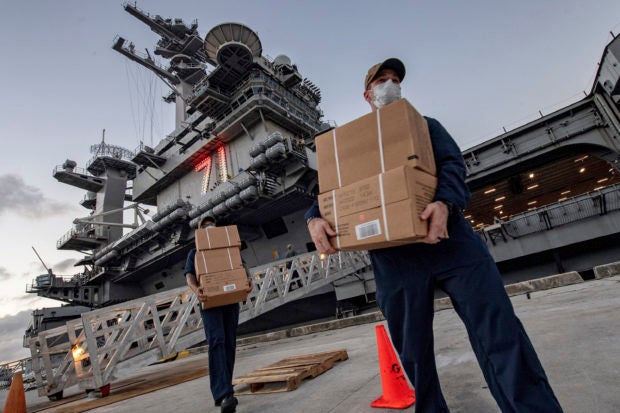 In this April 7, 2020, photo released by the U.S. Navy, sailors assigned to the aircraft carrier USS Theodore Roosevelt move ready to eat meals for sailors who have tested negative for COVID-19 and are being taken to local hotels in an effort to implement social distancing at Naval Base Guam. People in Guam are used to a constant U.S. military presence on the strategic Pacific island, but some are nervous as hundreds of sailors from the coronavirus-stricken Navy aircraft carrier flood into hotels for quarantine. Officials insist they have enforced strict safety measures. (Mass Communication Specialist Julio Rivera/U.S. Navy via AP)

An outbreak aboard the USS Theodore Roosevelt began in late March and has thrust the Navy into a leadership crisis after the ship’s commander distributed a letter urging faster action to protect his sailors.

Acting Navy Secretary Thomas Modly fired Capt. Brett E. Crozier and then assailed him during a speech on the ship in Guam, saying Crozier was either “too naive or too stupid” to be in charge of an aircraft carrier. Modly resigned Tuesday after facing blowback and after publicly apologizing for his comments about Crozier.

The carrier has been docked in the U.S. territory for more than a week as the 4,865-person crew is tested for the virus and moved ashore. More than 580 sailors have been confirmed infected. One was hospitalized Thursday in intensive care, said Gen. John Hyten, vice chairman of the Joint Chiefs of Staff.

More than 1,700 sailors who have tested negative are isolating in hotels, while the sick remain on base, Navy officials said.

“Our people are getting slapped in the face,” said Hope Cristobal, who worries officials are making promises about safety they won’t keep.

She lives less than a quarter-mile from hotels in Tumon, Guam’s version of Hawaii’s popular Waikiki neighborhood, saying, “We don’t know exactly where they’re being housed.”

Mary Rhodes, president of the Guam Hotel and Restaurant Association, declined to identify the hotels but said as many as 10 have been set aside to house up to 4,000 sailors. Seven of them had already stopped taking reservations and seen a dramatic drop in visitors as airlines canceled flights, she said.

Guam’s hotels frequently host military members, and the Department of Defense controls about a third of the island, which is 3,800 miles (6,115 kilometers) west of Honolulu and a crucial, strategic hub for U.S. forces in the Pacific.

Each sailor is staying in a room stocked with two weeks’ worth of linens, towels and water, Rhodes said. There is no contact with hotel workers, and only military police and medical teams can visit.

The Navy has sent masks, gloves and other safety equipment to the hotels, where employees make food that military personnel deliver, Rhodes said.
Not including the sailors, Guam has 133 confirmed coronavirus cases and five deaths as of Saturday.

Officials are focused on stopping the spread of the virus, Gov. Lou Leon Guerrero said as she announced that sailors could stay in hotels.

“I know there will be a small chorus of cynics who will oppose this decision, but now is not the time for ‘us versus them,'” she told reporters April 1. “We can protect Guam while being humane to them.”

The Rev. Fran Hezel said people likely aren’t that upset about the move.

“Frankly, I don’t think it’s much of an issue, because I think that people have bigger fish to fry,” said Hezel, parish priest at Santa Barbara Catholic Church in Dededo, Guam’s most populated village.

People mostly are sympathetic because many in Guam are in the Navy or have relatives who are.

“I’ve come to the conclusion that Guam … has got as deep links with the military as it does with the Catholic faith,” he said, noting that the vast majority of people on the island are Catholic.

The sailors’ quarantine is actually benefiting some smaller hotels, said Rhodes of the hotel association. The Navy has taken over hotels with more than 300 rooms, and other guests have been moved to smaller properties that are struggling amid cancellations.

Rhodes said “necessary measures” are in place to safeguard the public.

Those assurances aren’t enough for Cristobal and others. She said the sailors are adding to an already stressful situation: “I have shortness of breath, and I’m wondering if it’s COVID or is it my anxiety.”

For most, the virus causes mild or moderate symptoms, such as fever and cough. For some, especially older adults and people with other health problems, it can cause more severe illness, including pneumonia and death.

Some are urging the governor to reconsider allowing the sailors to stay in hotels, including I Hagan Famalaoan Guahan, a group that supports women who are Chamorro, the indigenous people of the Mariana Islands, which include Guam.

“Being negative today doesn’t mean that they won’t be in a week or so,” the group said in a statement. “The decision to house them in the middle of our community is playing a game of chance with the health of our people.”