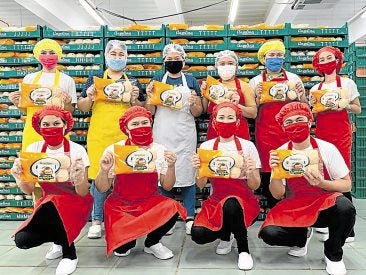 HELP Bread producers and the city government of Iloilo have joined forces to provide free pandesal in the city. —PHOTO COURTESY OF ANGELINA BAKESHOP AND THE ILOILO CITY GOVERNMENT

The coronavirus pandemic as it affects the country has exposed the worst among Filipinos — from profiteering and power-tripping among local leaders to fear and paranoia among the citizenry. But it has also brought out the best, especially in the spirit of charity and goodwill.

In Iloilo City, thousands of residents take comfort in having the quintessential “pandesal” delivered right at their homes for free as they face the third week of lockdown.

Flour and bread producers in the city have partnered with the local government to produce and deliver 648,000 pieces of the breakfast staple to help households cope with lockdown restrictions.

The “Ilonggo Pandesal” initiative, which started on April 6, aims to deliver around 5,400 pieces of pandesal per day to 240 community kitchens in the city’s 180 villages.

About 81,000 packs, each containing eight pieces of bread, will be distributed in the city until April 21.

“We collaborated in solidarity with our fellow Ilonggos and to help the city government and Mayor Jerry Treñas address the [pandemic],” Ted Valderrama Jr., Angelina Bakeshop operations manager, told the Inquirer.

He said more than 7,000 pieces of pandesal had been produced before a two-day production break on Holy Thursday and Good Friday.

“Help has been overwhelming, and it gives me more strength to even work harder for our city,” Treñas said in a statement.

But the family rejected that chance to earn a huge income and instead opted to give their harvest to the community.

“Due to the lack of available commercial vitamin C in the local market, our family decided to donate our produce to help boost the immune system, especially of the people who lost their income due to the COVID-19 health crisis,” Mama said in a phone interview.

At current prices, the harvest from the farm in Barangay Lagandang could have fetched P120,000 in the market. But the Mamas chose to give 100 sacks to the municipal government for distribution to the villagers.

Mama said the calamansi donated to Isulan, which is outside the Bangsamoro Autonomous Region in Muslim Mindanao (BARMM), was his family’s share as caretakers of the farm owned by his sister, Bai Ali Mama Guerra, and her husband, Public Works Minister Eduard Guerra of the BARMM.

He said his sister had earlier donated 91 sacks of calamansi to various localities in the BARMM.