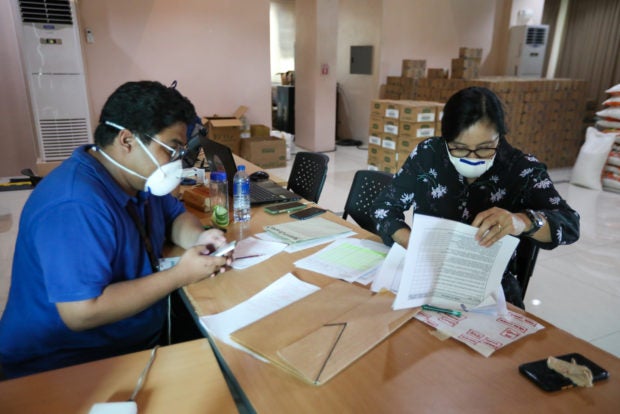 Vice President Leni Robredo has personally been in charge of the OVP’s assistance drive for frontliners in the fight against COVID-19, which has since raised more than P50.9 million, from her office’s funds and a donation drive spearheaded by its Angat Buhay partner, Kaya Natin! Movement. PHOTO FROM OVP

MANILA, Philippines — The Office of the Vice President (OVP) has now raised more than P50.9 million in its campaign to help COVID-19 frontliners.

In a Facebook post, Vice President Leni Robredo said the amount is composed of funds from the OVP as well as the donation drive conducted by the Kaya Natin Movement.

According to Robredo, the more than P50.9 million can purchase 116,200 PPE sets for 15-days work of 7,750 frontliners as well as 13,241 food and care packages for other frontliners such as janitors, security guards, and midwives, among others.

As of April 11, Robredo said OVP has already distributed 69,075 PPE sets to 327 hospitals and communities in the country.

(Help will also reach other parts of our country such as Zamboanga Peninsula, Basilan, Sulu, Tawi-Tawi and other provinces in Luzon and Visayas.)

(We thank you for your understanding as requests continue to come from Batanes all the way to Tawi-Tawi.)

As of Sunday, the Department of Health said there are 4,648 confirmed COVID-19 cases in the country, with the death toll reaching 297.