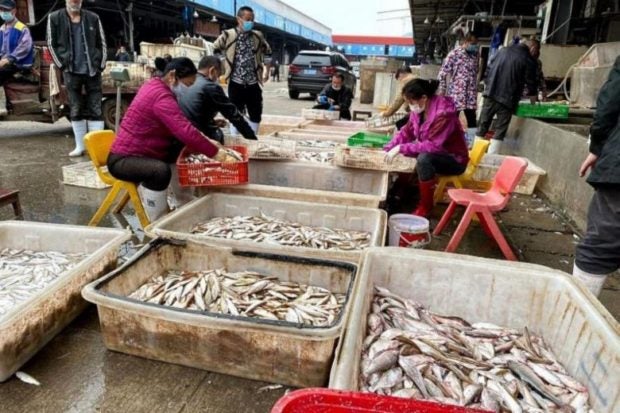 The Baishazhou Agricultural Products Market in Wuhan continued supplying groceries to thousands of sealed-off communities across the city when it was in lockdown. ELIZABETH LAW/The Straits Times/Asia News Network

WUHAN — A snaking line of cars waited to enter the Baishazhou Agricultural Products Market, with drivers having to scan a QR code and have their temperature taken before accessing the sprawling complex on the outskirts of Wuhan where all manner of produce is available.

While markets were shut during the coronavirus lockdown earlier this year, the open-air wholesale center in Wuhan continued running, supplying groceries to thousands of sealed-off communities across the city in Hubei province.

But such places have come under increased scrutiny in recent months after a similar market in the city center, which also sold wildlife, turned out to be a focal point of early viral infections.

Vendors say they have been subjected to increased inspections, with business somewhat affected.

More than 60 lawmakers in the United States last Wednesday called for the complete shutdown of wet markets after the head of the National Institute of Allergy and Infectious Disease, Dr Anthony Fauci, said the world should pressure China to close such outlets.

The coronavirus that causes the disease officially known as Covid-19 first surfaced in Wuhan late last year and early cases were linked to the Huanan Seafood Wholesale Market. The virus has affected nearly 82,000 people in China, killing 3,339, with 46 new cases and three deaths reported yesterday while worldwide, more than 1.7 million have been infected.

Subsequent research, including a study by Chinese researchers published in the medical journal Lancet in February, found that some of the earliest cases had no exposure to the Huanan market.

Dr Zhenzhong Si, a research associate at the University of Waterloo who studies food security in China, noted that the US senators were probably referring to markets selling wildlife, which are completely different from regular Chinese wet markets.

“An increased emphasis on hygiene is necessary and important if we are to prevent food-related pathogens from transmitting to humans,” Dr Si added.

Most wholesale markets were built to be on the outskirts of a city but with urban development, the complex can suddenly find itself in the city centre.

“Many of these wholesale markets are old, smelly and definitely unhygienic so we’ve seen changes in the last few years where new compounds are built and the market moved, which is easier than trying to fix an old, dirty place,” said Professor Zheng Fengtian of the School of Agricultural Economics and Rural Development at Renmin University.

He estimated that 80 per cent of Chinese households buy groceries that have come through such giant wholesale markets; the rest buy them directly from producers in “farmers markets” or online.

But he noted that China’s markets, most of which are clean, hygienic and well-run, have a reputation problem because of their past association with the wildlife trade.

“The whole idea of eating an animal part to nourish that particular body part (in a human), it’s a strange, strange practice and I don’t understand why it continues, even if it’s illegal,” Prof Zheng said.

China banned the trade and consumption of wild animals in February, putting millions of farmers and traders out of business. But activists fear a loophole that classifies certain animal parts as traditional Chinese medicinal remedies.

The country’s wild-animal farming industry was worth an estimated 520 billion yuan (S$104 billion) in 2016 and employed more than 14 million people, according to official data.

Under a previous law, around 50 species were allowed for consumption if they were farmed.

No wildlife was seen on sale at the Baishazhou market while a banner near the entrance read: “No slaughtering and selling live animals.”

A bustling hive of about a dozen buildings spread across nearly four football fields, container trucks, cars, scooters and pick-ups jostle for room in narrow alleys between the buildings. The market is separated by sections: vegetables, grain and sundry, seafood, and a meat section tucked away in a corner.

Vendors and buyers shout over each other as workers sort produce, the floor is littered with vegetable peelings, bits of transportation straw, fish guts and even the occasional flopping aquarium escapee.

“These trucks here, they bring produce from all over the province and the food here is sold not just in Wuhan, but all over Hubei,” said Mr Zheng Yi, 53, a tofu and pickle wholesaler.

His neighbor, a pork wholesaler who wanted to be known only as Mr Tao, said he usually supplies restaurants and hotels but had a steady stream of regular customers who wanted “the freshest pork”.

Since the outbreak, business has dwindled to about 10 per cent of its previous volume, with far fewer retail customers.

“We’ve deep cleaned our shop and thoroughly sanitize it every day before opening,” Mr Tao said, “but people are still worried about coming back. A lot are scared to even step out of their houses.”

He wants to try e-commerce but said the farmers he works with are already trying that out and he is reluctant to compete with them.

Blue hoarding has been put up around both parts of the Huanan Seafood Wholesale Market in downtown Wuhan, and black netting covers the building.

Police tape is wrapped around the hoarding and officers keep a watchful eye on those who linger too long outside. The market has been shut since Jan 1 for investigation and disinfection.

Even shops on the market’s perimeter that were still open in mid-January are now closed.

“It’s very strict here now and everyone’s so scared of the name ‘Huanan Seafood Market’,” said a female city sanitary worker who did not want to be named. “It’s better they just close the market down.”