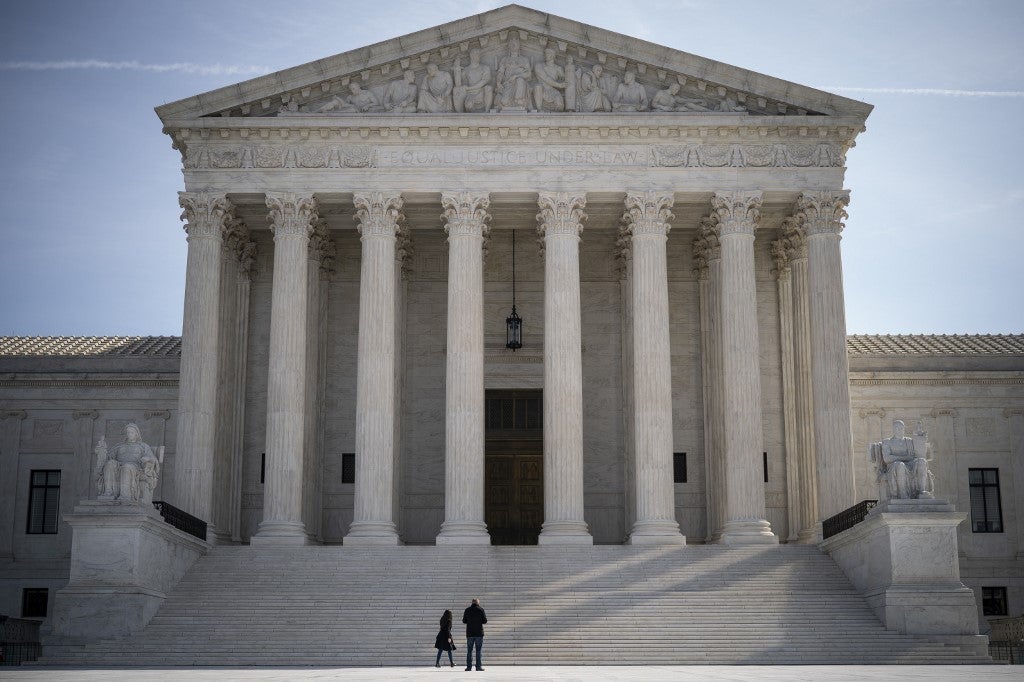 Two people stand at the base of the U.S. Supreme Court on March 16, 2020 in Washington, DC. Drew Angerer/Getty Images/AFP

WASHINGTON — Abortion rights advocates on Saturday called on the US Supreme Court to urgently intervene to force Texas to reinstate the right to abortion, which has been suspended in the state since the start of the novel coronavirus pandemic.

This is the first appeal related to COVID-19 to reach the highest American court, which has been operating only in writing for nearly a month.

The Court, which legalized abortion in 1973 in its landmark Roe v. Wade decision, will have to decide whether a state can suspend the case law in the name of a public health emergency.

This case will be a test for the Supreme Court, which has been profoundly reshaped since the election of President Donald Trump.

During his campaign, the Republican billionaire promised to appoint only anti-abortion judges to the court. Since then he has brought in two new judges out of nine.

The petition concerns Texas’s decision — later followed by other conservative states — to include abortion on the list of “non-emergency” medical procedures prohibited while the COVID-19 outbreak continues.

State Governor Greg Abbott argued that these procedures should be suspended to keep hospital beds available for coronavirus patients and protective equipment for their caregivers.

Abortion rights activists said the crisis was being exploited for “ideological” purposes and immediately took the matter to court.

They pointed out that abortions could not wait, that most of them were medical, and that Texan women wishing to terminate a pregnancy were likely to travel to neighboring states, at the risk of spreading the virus.

A federal court twice ruled in their favor, but its decisions were overturned on appeal. Texas abortion clinics are therefore asking the Supreme Court to reinstate the lower court’s decision.

“This is an extraordinarily difficult time, but this is an easy case,” said Nancy Northup, president of the Center for Reproductive Rights, which is defending them.

“Texas is blatantly abusing its emergency power to obliterate Roe v. Wade,” she added in a statement.

Other courts in Ohio, Alabama and Oklahoma have struck down similar measures.

While abortion is legal throughout the United States, there are wide regional disparities in access to the procedure.

Coastal states have many clinics, while the more religious central and southern states have adopted many restrictive regulations that have forced many facilities to close.