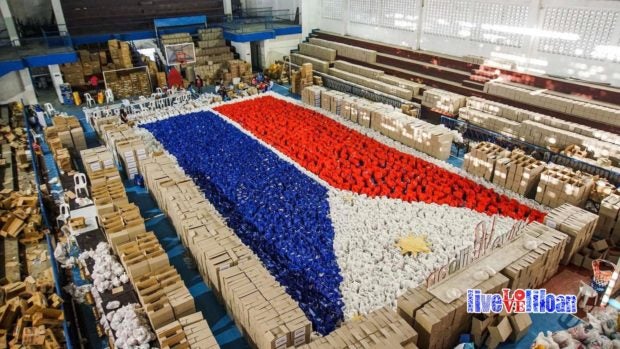 PINOY PRIDE Residents and officials of Liloan town in Cebu province create a giant Philippine flag out of relief packs that the local government will distribute to instill a sense of hope amid the gloom caused by the coronavirus pandemic. —PHOTO COURTESY OF MAYOR CHRISTINA FRASCO

When the World Health Organization officially declared the new coronavirus disease (COVID-19) as a pandemic, many local government leaders across the country wasted no time to prepare for the looming health emergency.

In Dagupan City, Mayor Brian Lim sent firetrucks to disinfect and sanitize streets, government buildings, schools, markets and other areas every day to control the spread of virus infection.

At the onset of the outbreak, Lim immediately asked health officials to set up disinfection tents in vital places, including the Malimgas and Makong markets, and Regional Medical Center.

While people in the city remained in their homes, a project called “Hot Meals on Wheels” went around villages to bring cooked food to residents.

Lim used the equivalent of his eight-month salary to buy 1,000 rapid test kits approved by the Food and Drug Administration. The amount, approximately P1 million, would be used by local health officials for persons who are suspects or probable carriers of the virus (formerly classified as persons under investigation). 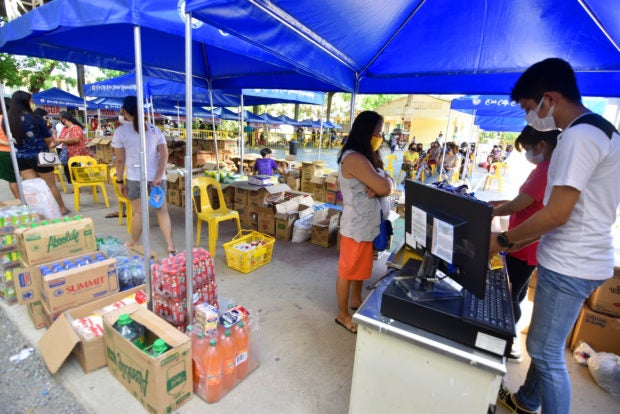 VILLAGE STORE The city government of Dagupan brings rolling stores to villages as community lockdowns have been imposed in Pangasinan province. —WILLIE LOMIBAO

In Baguio City, Councilor Art Allad-iw distributed relief goods to more than 80 households with visually impaired members. Allad-iw, who walks around with the aid of crutches, had used his own money to buy grocery items and hand these to his fellow persons with disabilities.

In Bataan province, Morong Mayor Cynthia Estanislao and her husband, former Morong Mayor Jorge Estanislao, both of them doctors, put up the municipal epidemiology and surveillance unit to monitor and identify suspected COVID-19 cases coming from Metro Manila.

In Nueva Ecija province, Mayor Emerson Pascual of Gapan City distributed a sack of rice, bags of vegetables, live chickens and fresh eggs to each of the 34,000 households in his town.

Pascual also offered to donate P4.5 million representing his salary from July 2016 to March this year to make sure that each of the households gets the aid they need during the crisis.

In Zambales, Gov. Hermogenes Ebdane Jr. had set up 15 quarantine facilities and border disinfection units to strengthen the province’s fight against COVID-19.

In Olongapo City, small wet markets, or “talipapa,” were put up in 17 villages to decongest the public markets. 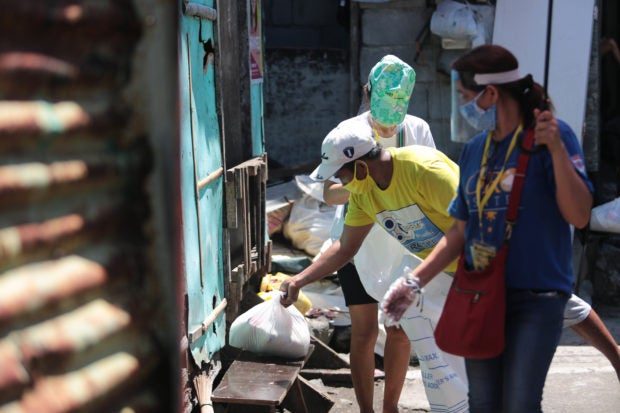 In Quezon province, General Luna Mayor Matt Erwin Florido said local officials had prepared a P4,000 cash aid for residents who would not qualify to receive financial assistance from the national government.

According to Florido, P3,000 will come from the local government’s development fund while P1,000 will be contributed by barangay officials.

In Sorsogon province, local governments have been distributing fresh and smoked “tamban” (herring) to residents to supplement their food supply.

Salvador Mendoza, the province’s information officer, said Gov. Francis Escudero advised local governments to either give away, or sell the fish at lower prices during the crisis. The provincial government gets its supply of fish from Bulan fish port complex. 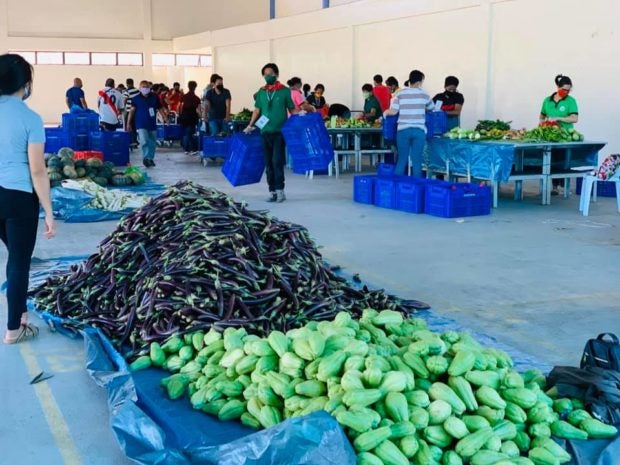 FARM FRESH Newly harvested vegetables grown by local farmers are packed by volunteers in Davao City to ensure that poor families in the city will have access to healthy and nutritious food throughout the quarantine period. —PHOTO COURTESY OF DAVAO CITY AGRICULTURE OFFICE

The municipal governments of Arteche in Eastern Samar and Naval in Biliran bought locally produced rice and vegetables for distribution to residents.

Naval Mayor Gerard Espina also provided bicycles to health-care workers who live outside the town center so they could go to work.

In Basey town, Samar, officials of Barangay Loyo distributed vegetable packs consisting of cabbage, squash, “monggo,” onions, tomatoes and soy sauce to each of the 277 households.

In the cities of Tacloban and Cebu, rolling markets have been mobilized to visit each village on a specific date to sell vegetables, rice and fish to discourage people from gathering in public markets.

Since the launch of the 30 mobile markets in Cebu City on April 2, Jonil Matuguina, city market administrator, reported a decline in the number of people going to Carbon Public Market, the biggest wet market in the city.

In Iloilo City, 240 community kitchens have been put up to provide meals to residents most affected by the quarantine. Food packs prepared by day care teachers are delivered to residents’ houses.

The city government also implemented a cash-for-work program for 20,000 residents who received P2,500 each for 10 days of labor.

In Negros Occidental, Gov. Eugenio Jose Lacson converted the government-owned Mambukal Resort in Murcia town into a quarantine site for persons under monitoring and a housing project into a healing center for suspects or probable cases of COVID-19 in Barangay Sto. Niño, EB Magalona town. 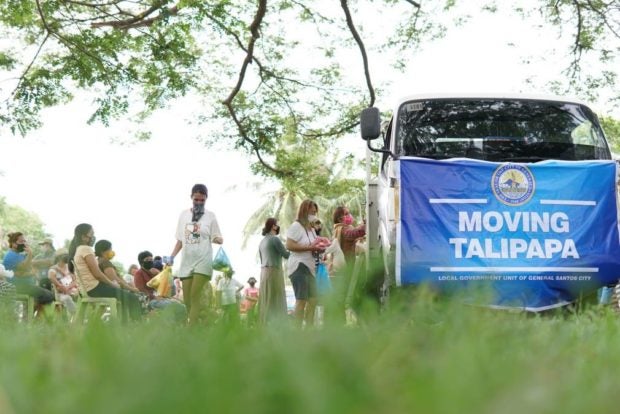 CLOSER TO HOME In General Santos City, villagers wait for their turn to buy food and other household needs from a mobile outlet operated by the local government. —PHOTO COURTESY OF CITY GOVERNMENT OF GENERAL SANTOS

Lacson also set up Cadiz District Hospital as a COVID-19 center and housed health front-liners at the provincial administration center in Bacolod City.

Thanks to the innovative ways of some local governments in Mindanao, their constituents have access to food, fresh from the farm. This strategy, in turn, lifts the economy of rural communities and sustains farmers and fishers amid the crisis.

The local government of Kauswagan in Lanao del Norte has been distributing organic rice and vegetables to Christian and Muslim families in its 13 villages.

Kauswagan Mayor Rommel Arnado said most of these came from farms of former Moro rebels under the town’s “From Arms to Farms” program. Some came from communal gardens in Cayontor and Libertad villages.

In Davao City, some 50,000 agri-food packs were prepared for poor families, especially those who did not receive regular food rations in the past weeks. Each food pack contains a kilo each of fresh vegetables, fish and either pork or chicken; a tray of eggs and 2 liters of milk, all bought from Davao City farmers under its “buy-back, repack and distribute” program.

In Cagayan de Oro, families with children who are severely malnourished are given special food packs with vegetables, rice, eggs, multivitamins and canned goods.

In General Santos City, the local government divided its territory into 12 clusters and organized four mobile talipapa for residents.

Read Next
Navotas Fish Port to open on Easter Sunday after disinfection
EDITORS' PICK
Pharmally’s Mago no longer in her condo unit — Gordon
4 essentials for overcoming data protection challenges in the New Normal
Gordon to Pharmally’s Mago: Show up or be a fugitive
Huawei’s relentless mission to bring ultimate health and wellness tracking for your fitness goals
Smart reaffirms 5G leadership as PH’s most reliable 5G mobile operator
294 areas in NCR under granular lockdown — PNP
MOST READ
Pharmally’s Mago no longer in her condo unit — Gordon
‘If it goes to Malacañang, so be it’: Lacson vows to follow evidence in Pharmally probe
Guimbal, Iloilo Mayor Oscar Garin passes away
Drilon questions legality of PCOO’s social media office
Don't miss out on the latest news and information.