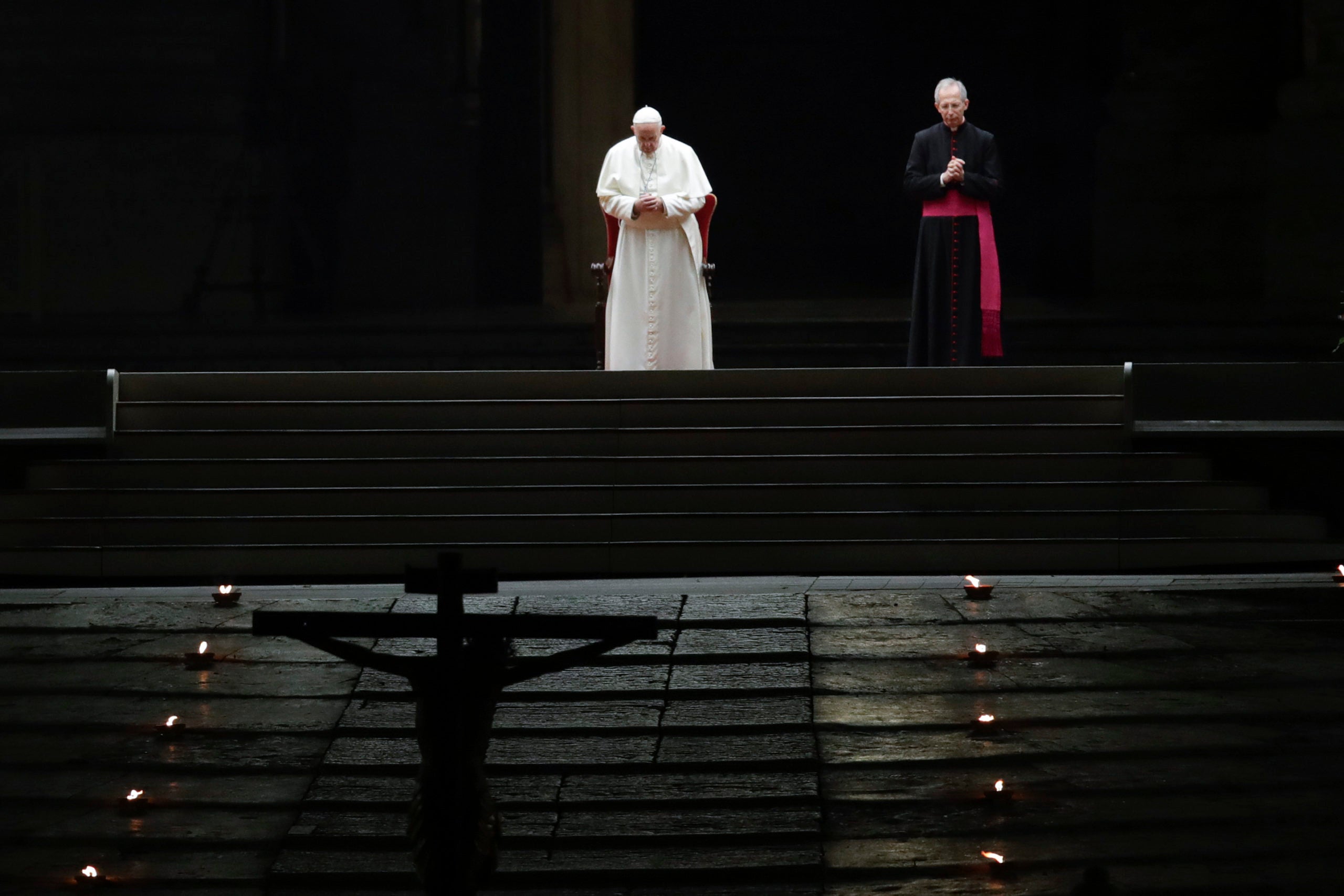 Pope Francis is flanked by Mons. Guido Marini, right, the Vatican master of liturgical ceremonies, as he leads the Via Crucis – or Way of the Cross – ceremony in St. Peter’s Square empty of the faithful following Italy’s ban on gatherings to contain coronavirus contagion, at the Vatican, Friday, April 10, 2020. (AP Photo/Alessandra Tarantino)

VATICAN CITY  — A pair of white-coated doctors who care for coronavirus patients participated in a torch-lit Good Friday procession, watched over by Pope Francis and held in a hauntingly nearly empty St. Peter’s Square instead of at Rome’s Colosseum because of the safety measures aimed at containing the virus’ spread.

Francis presided over the late-night ceremony from the steps outside St. Peter’s Basilica as the procession circled 10 times around the square’s central obelisk, slowly following a path marked by candles set on the square’s cobblestones. Besides the two doctors, who are part of the Vatican’s health service, were a former prison inmate and the chaplain of prison in Padua, northern Italy, a uniformed penitentiary police officer, and nurses.

The Way of the Cross procession, also known by its Latin name, Via Crucis, evokes Jesus suffering on his way to be crucified.

In another break with tradition, Francis didn’t deliver a homily or offer remarks at the end of the 90-minute procession. Instead, for several minutes, he prayed silently, with his head bowed and hands clasped, before a wooden crucifix which had been carried in Rome during the early 16th-century when the city was suffering through a plague.

By then, the procession participants had left the square, and except for an aide, some camera crew and very few other Vatican personnel, Francis was left alone with his thoughts as he looked out across the vast empty space, where normally tens of thousands of people attend his audiences or outdoor Masses.

During the procession, Francis listened to meditations being read aloud on the theme of suffering. Among those composing the reflections were inmates at the prison, the family of a woman slain in domestic violence, an inmate’s mother and the daughter of an inmate serving a life sentence, the Vatican said.

While the pope gave no speech at the end of the procession in St. Peter’s Square, earlier in the day, in a phone chat with the host of an Italian state TV talk show, Francis offered thoughts about the COVID-19 outbreak.

Francis said he thinking “about the crucified Lord” as well as the “stories of the crucified in history, to those of today, of this pandemic.” He went on to praise doctors, nurses, nuns and priests who “died on the front lines, as soldiers, who gave their life for love.”

Earlier in the day, at a Good Friday service inside the basilica, the papal preacher said the pandemic has alerted people to the danger of thinking themselves all-powerful. During that service, in a sign of humble obedience, Francis prostrated himself for a few minutes on the basilica floor.

With rank-and-file faithful not allowed into the basilica in accordance with virus containment measures, and as Francis listened attentively, the Rev. Raniero Cantalamessa said that “it took merely the smallest and most formless element of nature, a virus, to remind us that we are mortal” and that “military power and technology are not sufficient to save us.”

Cantalamessa said that when the pandemic is over, “returning to the way things were is the ‘recession’ we should fear the most.” He added that the virus broke down “barriers and distinctions of race, nation, religion, wealth and power.”

The Vatican has said there are eight COVID-19 cases among Vatican city residents or employees.

All of the Vatican’s Holy Week ceremonies have been barred to the public, in keeping with Italy’s lock-down measures to contain the contagion. Italy is living through the fifth week of lockdown with at least three more weeks to go.

The Colosseum Good Friday Way of the Cross procession normally draws tens of thousands of pilgrims and Romans who clutch candles and prayer books, while the pope watches from a rise overlooking the ancient arena. But Italy’s stay-at-home measures sent tourists and pilgrims fleeing the country weeks ago, and Romans must stay at home except to go to essential jobs or do vital tasks like buying food or medicine.