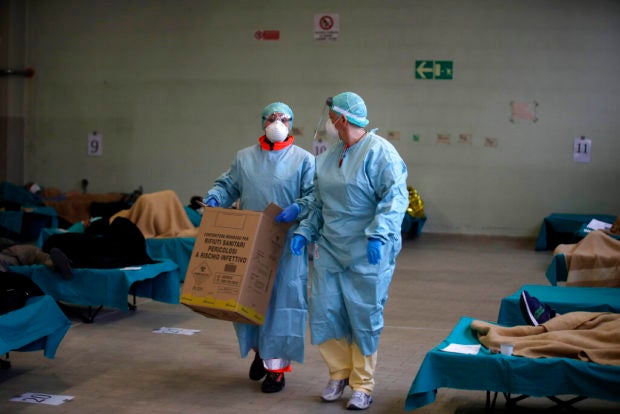 Paramedics carry a hazardous medical waste box as patients lie on beds at one of the emergency structures that were set up to ease procedures at the Brescia hospital, northern Italy, Thursday, March 12, 2020. Italians woke up to yet further virus-containment restrictions after Premier Giuseppe Conte ordered restaurants, cafes and retail shops closed after imposing a nationwide lockdown on personal movement. For most people, the new coronavirus causes only mild or moderate symptoms, such as fever and cough. For some, especially older adults and people with existing health problems, it can cause more severe illness, including pneumonia. (AP Photo/Luca Bruno)

ITALY — Italian Prime Minister Giuseppe Conte on Friday refused to bow to business pressure and extended the Mediterranean country’s economically-crippling lockdown until May 3.

Conte made the announcement after Italy’s official COVID-19 toll climbed by another 570 fatalities to 18,849 — more than any other country — but with the growth rate now just a fraction of what it was a few weeks ago.

Media reports said business unions from regions responsible for 45 percent of Italy’s production — and 80 percent of its coronavirus deaths — had written to Conte warning that companies will be unable to pay wages if the shutdown runs on.

But Conte said Italy could not afford another spike in infections and needed to exercise extra caution in the face of the new disease.

“We are all, I imagine, impatient to get going again,” Conte said in a televised address.

He said the extension of the lockdown for another three weeks was “a difficult but necessary decision for which I assume full political responsibility.”

Conte’s decision followed days of consultations with scientists and union leaders with a range of conflicting concerns.

A miscalculation by Conte could either result in a new spike in infections or do unnecessary damage to the economy — and people’s livelihoods — by keeping everything shut for longer than strictly required.

The United State and countries across Europe are watching with interest to see which way Italy chooses as it seeks to come out of its worst crisis since World War II.

Conte agreed to allow a tiny fraction of businesses that had been shuttered since March 12 to re-open on a trial basis when the current restrictions expire on Monday night.

The full list of businesses and factories is expected to be published on Saturday and is likely to be extremely small.

Italians may also be cheered by media reports suggesting that laundromats and dry cleaners will be allowed to reopen for the first time in more than a month.

Only grocery stores and pharmacies have been able to operate since a general lockdown began at the peak of the Mediterranean country’s outbreak on March 12.

A study released by the Confcooperative small business lobby said the closures have left more half of Italy’s 1.3 million construction workers and over a third of the 11.4 million services sector employees furloughed.

Another report by the Confindustria big business lobby estimated that every week of Italy’s shutdown was chopping another 0.75 percent off its annual gross domestic product.

The figure was similar to the only calculated for France by that country’s central bank.

Italian government scientists are also pushing for the ban on public gatherings to be extended as long as possible as a safety precaution.

Health officials have spent weeks warning that the Italian outbreak had peaked only because of the various closures and bans.

But Conte was now reportedly considering whether to allow Italians to leave their houses without a specific reason for the first time time in nearly two months on May 4.

The Corriere della Sera newspaper said Italy’s individual regions might be given the freedom to decide whether to end their confinement measures once the latest restrictions expire.

A final decision is not expected before the end of the month.