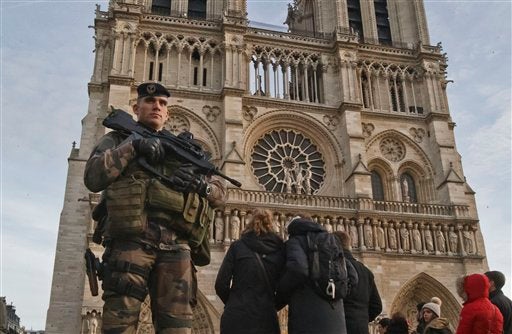 A soldier patrols at the Notre Dame cathedral in Paris, before the New Year. AP FILE PHOTO

PARIS, France — The archbishop of Paris led a small prayer ceremony Friday at the Cathedral of Notre-Dame, marking the start of the Catholic Easter weekend one year after a fire that nearly destroyed the world heritage monument.

“There is still life here,” Archbishop Michel Aupetit said after he and a handful of priests entered the church wearing white hard hats for Good Friday prayers.

However there will be no Easter celebrations held at Notre-Dame nor any other church in France, after large gatherings were banned last month as part of France’s lockdown to contain the coronavirus outbreak.

Restoration work at the cathedral was also halted, adding to doubts about the government’s ambitious plans to rebuild the 13th-century landmark by 2024.

“In this Holy Week, the entire world has been stunned by a pandemic that is spreading death and paralyzing us,” Aupetit said.

After a moment of silence before a crown of thorns, which many Christians believe was placed on Jesus’ head during his crucifixion, Aupetit offered thanks for the “global movement” that followed the blaze to ensure the cathedral “is rebuilt and restored.”

Star French classical violinist Renaud Capucon — wearing a plastic suit and boots to protect against the toxic lead from the molten roof that still contaminates the site — then played Bach sonatas.

The cathedral’s structure remains at risk as workers try to consolidate walls weakened by the collapse of the oak beams supporting the roof as well as the steeple, which were undergoing restoration when the fire broke out on April 15, 2019.

They must still carefully remove a tangled web of molten steel scaffolding before being able to fully cover the gaping hole in the roof and protect the site from rain — an operation that was set for this spring before being halted by the coronavirus crisis.