In a test of faith, Christians mark Good Friday in isolation

JERUSALEM — Christians have commemorated Jesus’ crucifixion without the solemn church services or emotional processions of past years, marking Good Friday in a world locked down by the coronavirus pandemic.

The chanting of a small group of clerics inside Jerusalem’s Church of the Holy Sepulcher echoed faintly through the heavy wooden doors, as a few people stopped and kneeled outside to pray. The centuries-old church, built on the site where Christians believe Jesus was crucified, buried and rose from the dead, is usually packed with pilgrims and tourists. 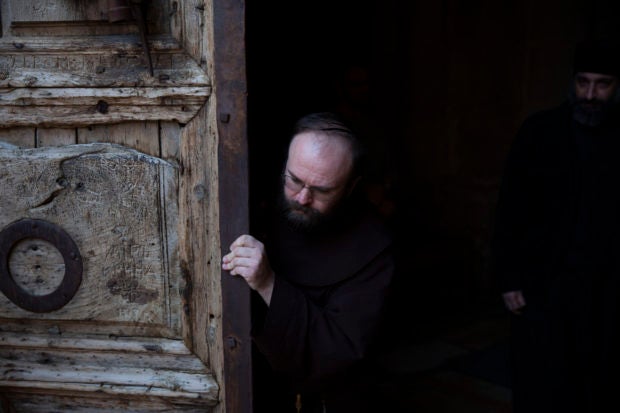 A priest closes the door of the Church of the Holy Sepulchre, a place where Christians believe Jesus Christ was buried, during a lockdown following government measures to help stop the spread of the coronavirus, during Holy Thursday in Jerusalem’s old city, Thursday, April 9, 2020. The traditional Holy Thursday procession is taking place inside the church with out public attendance this year due to restrictions imposed to contain the spread of the coronavirus. (AP Photo/Ariel Schalit)

Later, three monks in brown robes and blue surgical masks prayed at the stations of the cross along the Via Dolorosa, the ancient route through the Old City where Jesus is believed to have carried the cross before his execution at the hands of the Romans. It runs past dozens of shops, cafes, restaurants and hostels, nearly all of which are closed.

In ordinary times, tens of thousands of pilgrims from around the world retrace Jesus’ steps in the Holy Week leading up to Easter. But this year, flights are grounded and religious sites in the Holy Land are closed as authorities try to prevent the spread of the virus.

James Joseph, a Christian pilgrim from Detroit dubbed “the Jesus guy” because he wears robes and goes about barefoot, lives near the Church of the Holy Sepulcher year-round. On Friday morning he had the plaza outside to himself. He said Good Friday has special meaning this year.

“The crucifixion is the saddest thing possible, and (Jesus) felt what we feel right now,” he said. “But thanks be to God. … He rose from the dead and changed the world on Easter.”

The new virus causes mild to moderate symptoms in most patients, who recover within a few weeks. But it is highly contagious and can be spread by those who appear healthy. It can cause severe illness and death in some patients, particularly the old and infirm.

In Rome, the torch-lit Way of the Cross procession at the Colosseum is a highlight of Holy Week, drawing large crowds of pilgrims, tourists, and locals. It’s been canceled this year, along with all other public gatherings in Italy, which is battling one of the worst outbreaks.

The virus has killed More than 18,000 people in Italy and over 95,000 worldwide, according to data gathered by Johns Hopkins University.

Instead of presiding over the Way of the Cross procession, Pope Francis will lead a Good Friday ceremony in St. Peter’s Square without the public.

Ten people — five from the Vatican’s health office and five from prison in Padua, in northern Italy, where infections are particularly widespread — will participate in the procession, which will circle several times around the obelisk in St. Peter’s Square.

On display in the square will be a wooden crucifix, famed for being carried in a procession during the plague that ravaged Rome in the early 16th century.

The Notre Dame Cathedral in Paris, nearly destroyed by fire a year ago, is holding a special Good Friday ceremony in the charred, gutted interior of the medieval landmark. But the event is closed to the public for two reasons: France’s strict virus confinement measures forbid religious or any other gatherings, and the cathedral remains too structurally unstable to let parishioners inside.

“We wanted to send a message of hope” through the ceremony, Paris Archbishop Michel Aupetit told reporters this week.

“The message of hope is especially important for our compatriots at a time when we are particularly affected by the coronavirus, which is sowing anguish and death,” he said. 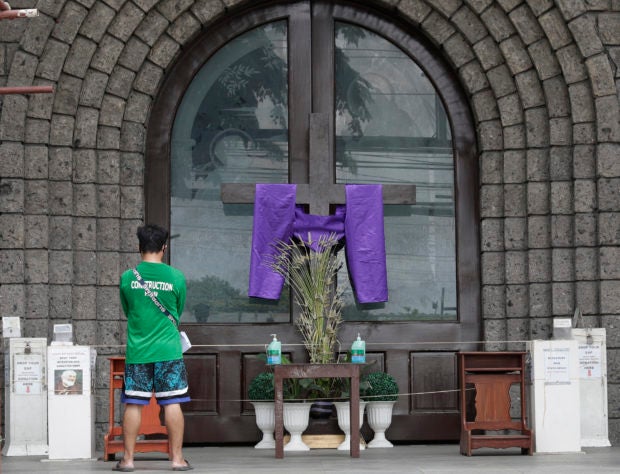 A man prays outside a closed St. Peter’s Parish on Maundy Thursday, April 9, 2020, in Manila, Philippines. In the Philippines, Asia’s bastion of Catholicism, masses and other solemn gatherings in packed churches and bizarre folk ritual like real-life crucifixions that draw thousands of tourists and penitents each year in a rice field north of Manila, have been put off due to a lockdown to prevent the spread of the new coronavirus on the main northern region of Luzon, home to more than 50 million largely Catholic Filipinos. (AP Photo/Aaron Favila)

In the Philippines, Asia’s bastion of Catholicism, masses and other solemn gatherings have been put on hold, including folk rituals that feature real-life crucifixions and usually draw thousands of tourists and penitents. The annual procession of the “Black Nazarene,” a centuries-old statue of Jesus, through downtown Manila, has also been canceled.

Churchgoers have been told to stay home and remember Jesus’ suffering through family prayers, fasting and by watching masses and religious shows on TV or online.

For Josille Sabsal, it’s a test of faith. The 30-year-old Catholic missionary tried to replicate an altar in her Manila home by setting up a laptop, a crucifix and small statues of Jesus and the Virgin Mary on a table.

“It’s different because the priest is on a screen,” she said. “When the internet lags, the mass suddenly gets cut off and you have to look for another YouTube video.”

“I miss that moment in church when you say, ‘Peace be with you,’ to complete strangers and they smile back,” she added.

The Rev. Flavie Villanueva, a former drug addict who ministers in Manila’s slums, got special permission to celebrate Mass on Thursday for 73 homeless people in a college basketball court. They wore masks, stayed more than an arm’s length apart, and there was no singing.

He’s sad to see the churches emptied out, but hopes it will help people to renew their faith.

“We are asked to go back and rediscover where the church in our lives first started, and that’s in the family.”