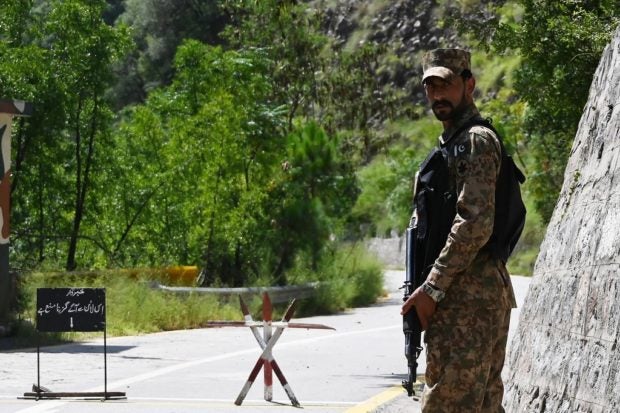 A Pakistani troop patrols near the Line of Control (LoC) — the de facto border between Pakistan and India — in Chakothi sector, in Pakistan-administered Kashmir on August 29, 2019. AFP FILE PHOTO

ISLAMABAD — Pakistan’s army said Thursday it had shot down a small Indian surveillance drone in Kashmir, as tensions rose over continued cross-border shelling in the disputed territory.

According to a statement from the army media wing, the Indian quadcopter — about the same size as a commercially available hobby drone — had crossed 600 meters (650 yards) over the de facto border known as the Line of Control (LoC).

“This blatant act was aggressively responded to by Pakistan Army troops shooting down Indian quadcopter,” the statement read.

An Indian army spokesman said the drone “is not ours.”

The incident came as Pakistan and India accuse each other of violating ceasefire terms at the LoC, with sporadic shelling reported from both sides.

Relations between the nuclear-armed neighbors nosedived in February last year, with India launching an air strike inside Pakistan after accusing its neighbor of harboring a group that staged a suicide bomb attack that killed 40 Indian paramilitaries in Kashmir.

Pakistan launched its own raid the next day and later shot down an Indian fighter jet and captured its pilot, taking the arch-rivals to the brink of war.

The sky-high animosity between the two countries deescalated after Pakistan returned the downed pilot to India.

Kashmir has been divided between India and Pakistan since independence in 1947, and has been the spark of two wars and numerous flare-ups between the two foes.