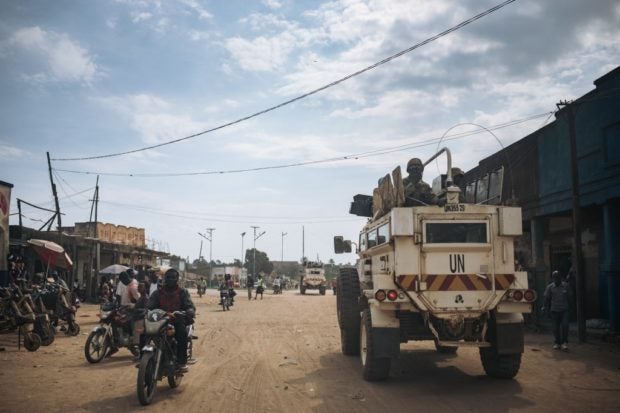 United Nations (UN) South African peacekeepers patrol a street in Oicha where an attack took place in a nearby village the day before, in Oicha, on January 29, 2020. AFP FILE PHOTO

UNITED NATIONS —  With 110,000 peacekeepers deployed in more than a dozen countries around a world now ravaged by the coronavirus, the United Nations faces twin challenges: keeping those soldiers safe and, more importantly, persuading governments not to bring them home.

One fear is that of a “stampede effect,” in the words of one diplomat. Countries that have contributed peacekeepers “might have a legitimate concern to the effect of ‘I am not staying here’ or ‘I am not leaving my men here because if they get infected, they will not be well taken care of,'” the diplomat told AFP.

The UN under-secretary general for peacekeeping operations, Jean-Pierre Lacroix, told AFP Wednesday that as of right now he had not received any requests to withdraw peacekeeping troops because of COVID-19.

“It is more essential than ever to press on with our collective commitment to peace,” he said.

Preparing for the arrival of the virus in countries with UN blue-helmeted soldiers — and so as to avoid spreading the pathogen — on March 6 the UN stopped rotating its troops in and out of conflict zones where they are trying to keep the peace.

This week the UN extended that new policy through June 30, and it now applies to all countries where UN peacekeepers are deployed.

For weeks now, the isolation measures applied around the world for people found to be infected with the coronavirus are now also in force at camps where UN soldiers are housed.

Precautions have also been taken with UN patrols so that soldiers do not infect each other or local people, UN officials say.

Indeed, the organization is keenly aware that UN peacekeepers from Nepal that were deployed to Haiti after the devastating 2010 earthquake infected local people with cholera in an epidemic that went on to claim at least 10,000 lives.

“We are making every possible effort to prevent our people from being vectors of contagion,” said Lacroix, citing strict hygiene rules and minimal physical contact with locals.

As Africa — largely spared so far by the pandemic, unlike Europe and the US — awaits a hard hit in the next few weeks, the goal now for the UN is to keep operating on the continent, such as in Mali, the Central African Republic, South Sudan and the Democratic Republic of Congo.

Measures taken against COVID-19 have had an impact on the UN’s peacekeeping operations, a diplomat said on condition of anonymity.

But these operations must continue, another diplomat said, predicting “total catastrophe if the operations collapse with the departure of UN troops.”

‘Sense of the ephemeral’

Since March 23, Secretary General Antonio Guterres has called for an immediate ceasefire in war zones all over the world, such as in Yemen and Syria.

The appeal has had little effect on the ground. But it also amounts to an implicit ask for countries contributing troops to keep them right where they are.

On Tuesday, the European Union — a major source of soldiers and police officers for UN peacekeeping missions — backed the idea of keeping UN troops in place, promising to not bring home European soldiers engaged in such operations.

“We would like to underline that, despite the strain the pandemic is putting on our own systems, we stay more committed than ever to the work the peacekeepers are carrying out throughout the world,” the EU said in a message to Guterres.

UN peace operations “will need to be able to continue their operations to support the host countries in this especially challenging time,” the EU added.

Some UN diplomats are hoping that Africa’s response to the pandemic, when it hits the continent with its full deadly force, will be unexpectedly good and allow UN peacekeepers to stay put.

“African countries are much more prepared for epidemics psychologically and in terms of their health care systems,” one European diplomat said, noting Africa’s experience with an Ebola epidemic from 2013 to 2016 and  a measles epidemic now affecting the Democratic Republic of Congo.

One African diplomat said that in wealthy countries “people have become complacent and over-confident” and this helps explain “their even greater disarray when they face a crisis like this one.”

“Africans are stronger in terms of mental resilience. They have a sense of the ephemeral, faith in God, be it a Muslim God or a Christian God, and this will be their strength,” this diplomat said, adding that Africans also have a much stronger knack for helping each other than do people in rich Western nations.

Lacroix, however, said he believes the pandemic will have a particularly rough impact in countries with UN peacekeepers because of weak infrastructure and war-ruined health care networks.

Still, he expressed optimism. “What is encouraging is that we are a step ahead of the virus in most of the settings where UN peacekeepers operate,” said Lacroix.