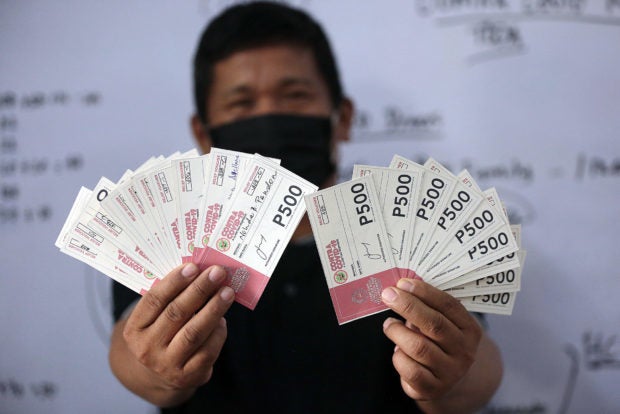 HELP FROM CHURCH Claretian priest Educ Apungan of the Immaculate Heart of Mary Parish Church in Quezon City shows cash vouchers distributed by the parish to around 300 poor families needing relief during the Luzon lockdown. The vouchers can be used to buy food and other essentials in grocery stores selected by the Claretian missionaries. (Photo by GRIG C. MONTEGRANDE / Philippine Daily Inquirer)

MANILA, Philippines —As problems mounted in the distribution of emergency subsidies to poor families during the coronavirus crisis, the chair of the House ways and means committee on Tuesday suggested a radical change in the government’s approach.

Instead of giving the second installment of the P5,000-to-P8,000 assistance per month to 18 million indigent families, why not grant a universal basic income of P1,000 to all Filipinos, except the wealthiest 10 percent?

Albay Rep. Joey Salceda said the emergency aid should not be limited to the poor but expanded to the middle class, considering its contribution to the country’s tax revenue.

The administration is open to extending a helping hand to the middle class.

“The middle class cannot avail themselves of the social amelioration. So we have to study what program we can create for them,” Cabinet Secretary Karlo Nograles, spokesperson of the Inter-Agency Task Force (IATF) on Emerging Infectious Diseases, said on Tuesday.

Nograles made the remarks after President Rodrigo Duterte agreed with Cavite Gov. Jonvic Remulla’s proposal for the government to also help the middle class.

“The point raised by Governor Remulla of Cavite, I think, is valid. We’ll try to remedy it with whatever we find down the road,” Duterte said in a televised address late Monday night.

The President described the middle class as those who “have climbed up their way in life” but were also hurting from the novel coronavirus crisis and the ensuing lockdown.

“These middle-income earners are the ones who are renting a house in a nice subdivision and they have a little money saved for the rainy days. Now, what is really very sad is that the rain has arrived,” he said.

Duterte said Remulla wrote him a letter to appeal that his middle-class constituents in Cavite province be included in the government’s cash aid, which was meant for low-income families.

If he had his way, the President said he would include middle-class Filipinos in the cash aid program, but he admitted that funding was not enough to sustain even for low-income families.

“In the estimates, we did not include the middle class,” the President said.

In a March 25 letter to Duterte, Salceda proposed that “all Filipinos, except those in the top 10 percent” of the population, receive P1,000 each during the Luzon-wide enhanced community quarantine.

This would be in lieu of the second installment of the cash subsidy for poor families under the Bayanihan to Heal as One Act, Salceda told the Inquirer.

The law authorizes the President to tap off-budget outlays amounting to P275 billion, of which P200 billion would go to the monthly cash subsidy for poor households over a two-month period.

The government has begun distributing the social amelioration package through the Department of Social Welfare and Development, but the process has been hampered by red tape and problems in identifying beneficiaries under a “quota system.”

Salceda suggested that the second half of the P200-billion outlay for the cash assistance be guided instead by a universal basic income approach.

“It will do away much of the convoluted eligibilities and make for faster distribution,” he said, noting that he first recommended the approach in a letter to the IATF on March 19.

The lawmaker cited the contribution of middle-income households to the country’s tax intake, saying those in the 7th, 8th and 9th deciles contributed P44.4 billion in taxes, including P29.4 billion in personal income taxes.

“I asked the President to consider a basic income approach to distributing the emergency subsidy. Essentially, you distribute P1,000 to P2,000 per head,” Salceda said.

The only eligibility is if one is Filipino and “not rich,” he said.

Salceda said the basic income approach would be advantageous “for ease of administration, ease of accountability and to avoid arbitrariness in selecting eligible beneficiaries and sectors.”

“Basic income would be easier to target (i.e., if you are wealthier than 90 percent of Filipinos, you will not receive it. Otherwise, you are entitled). It would entail less administrative costs as it would not require the kind of data mining required of identifying beneficiaries from existing but disjointed lists,” he said in the letter.

Salceda added that the costs of basic income would approximate the P200 billion being projected for the emergency subsidy program. “In fact, it may be cheaper. To cover 90 percent of the population would require 198.2 billion. To cover 80 percent would require P176.2 billion.”

The IATF, meanwhile, has approved a social amelioration program for those employed in the formal sector.

Nograles said the body gave the go-signal for the Department of Labor and Employment (DOLE) to provide relief to the formal sector workers.

“For this purpose, the IATF supports the approval and immediate release of the requested budget by the DOLE amounting to P5 billion in order to defray the costs of the social amelioration programs,” he said in a virtual briefing on Tuesday.

Nograles, however, said the beneficiaries of these programs “shall be separate and distinct from those already covered by social amelioration programs of other agencies of the national government.”

As for funds for a livelihood assistance grant, the government wants these released by next week.

In a report to Congress released to media on Monday night, the President said the Sustainable Livelihood Program–National Program Management Office was crafting supplemental guidelines for the release of the grant.