MANILA, Philippines — The spread of fake quotes credited to international celebrities, and even world leaders, about President Rodrigo Duterte is another virus to watch out for.

The past month had seen a spike in fabricated statements from world leaders, Hollywood figures and even fictional characters, all of which sing praises for Duterte.

These came after the President received criticism not just for the government’s response to the coronavirus disease (COVID-19) pandemic, but also for his late-night addresses to the nation.

Some of the quotes used news publications’ templates, such as that of INQUIRER.net, to spread misinformation. Quotes falsely attributed to actor Jackie Chan and Queen Elizabeth II have been shared and reshared on Facebook groups and pages that back the President.

For instance, a March 22 post on a pro-Duterte page shows the INQUIRER.net template edited with a statement supposedly from the Hong Kong action star that says, “President Rodrigo Duterte has been an exemplary president.”

Jackie Chan to President Duterte." What a very good President"

Though Duterte and Chan met last August in Beijing, there is no proof that the action star has made such a statement.

After INQUIRER.net shared on social media an excerpt from Queen Elizabeth II’s Sunday address to the United Kingdom, the same post was manipulated to say that Duterte looked “overworked” and that the “Philippines doesn’t have the worst government, it actually has the worst citizens.” 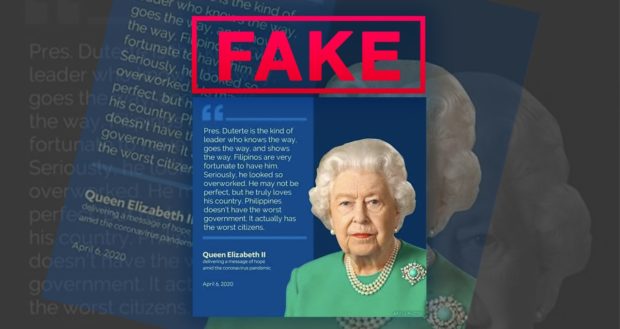 Some posts also appear to be satirical as they included dead figures and film and TV characters, ranging from Nazi leader Adolf Hitler (who died in 1945) to Meredith Grey of American TV series “Grey’s Anatomy”.

Such posts have been debunked by the organization Fact Check Philippines, which serves as a watchdog for misleading or fake news on social media and news sites.

Meredith Grey is a character from the US TV Series 'Grey's Anatomy'. As such, this quote is also fake.

The Philippine National Police warned last March 20 that those who post fake news can face penalties under existing laws.