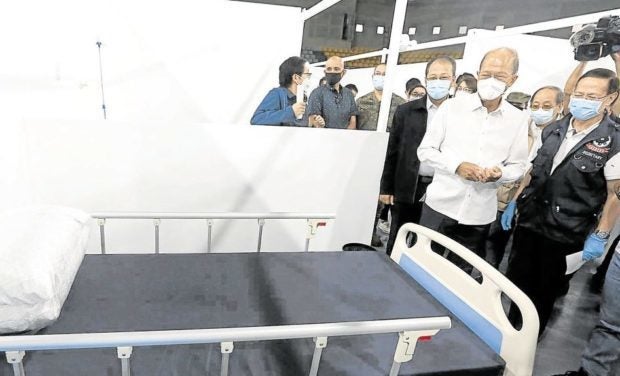 MANILA, Philippines — With just days before the scheduled lifting of the Luzon lockdown, the Department of Health (DOH) on Monday reported another spike in the number of new coronavirus cases in the country.

Health Undersecretary Maria Rosario Vergeire said 414 new cases were recorded nationwide, pushing the total to 3,660. She, however, did not explain why there was another surge in the number of new cases, just two days after the DOH reported cases falling to below 200.

The trend in the number of new cases is one of the crucial factors that the DOH will consider when it makes a recommendation to the Inter-Agency Task Force on Emerging Infectious Diseases whether to extend or lift the lockdown as scheduled on Easter.

The task force is holding meetings this week to decide whether to lift, loosen or extend the lockdown. President Duterte is expected to announce the decision based on the group’s recommendation early next week.

“The basis [of our recommendation] would be the trend of our cases and if our health-care system can appropriately manage our COVID-19 cases. If the increase in the number of new cases has slowed down and our health-care system becomes more prepared [to handle cases], that would be a good signal for us to say if we can already [lift the lockdown],” Vergeire said.

On top of these, she said, the social, economic and security factors would also be studied and considered.

With the addition of nine patients, the number of those who have recovered from COVID-19 increased to 73, or barely 2 percent of the total confirmed cases.

The death toll remains high, as 11 more patients were reported to have died. The total number of fatalities now stands at 163.

Vergeire explained that the number of fatalities was higher than those of recovered patients because of their testing protocol, which gave priority to the most at risk, that is, the severely ill and those who belong to the vulnerable population like the elderly.

It also takes, on average, two weeks for mild cases to recover, while for severe to critical cases it can take up to six weeks, she said.

“This is why many of our active cases are still not listed as recovered,” she said.

20,092 testedIt is unclear though when the new recorded fatalities died, as the DOH has stopped releasing the case profiles of recent fatalities since Friday, when the biggest single-day increase in deaths was recorded.

Before the announcement of the new cases, DOH data showed that 20,092 people had been tested for SARS-CoV-2, the virus that causes COVID-19. The majority of those tested, or 83 percent, were negative.

Vergeire maintained that while the DOH expanded its testing capacity to cover more people belonging to the at-risk population, the agency still would not suggest the use of rapid test kits to determine what additional interventions should be made against COVID-19.

“It is not recommended to use the rapid test kits as a basis for what would be our next measures against COVID-19,” she said.

Deemed at risk are patients showing symptoms and people under monitoring, pregnant women, the elderly, those with preexisting ailments and health-care workers.

Carlito Galvez Jr., head of the National Task Force Against COVID-19, told a press briefing on Monday that the mass testing for these people would begin in Metro Manila, the epicenter of the coronavirus outbreak in the country.

“The next most affected is [Calabarzon], then [Central Luzon], Davao region and Zamboanga,” Galvez said.

“In the next few days, we will focus more [on] testing so we can detect and immediately isolate all [virus] carriers,” he said.

Within the week, Vergeire said 112 people suspected of having contracted the virus could be taken in at Rizal Memorial Coliseum, which will serve as a community quarantine. Similarly, the World Trade Center and the Philippine International Convention Center can accommodate in the next few days a total 796 patients.

Reimbursement from PhilHealthMeanwhile, Philippine Health Insurance Corp. (PhilHealth) committed Monday that it would “reimburse in full” COVID-19 patients who were made to pay for their hospitalization. 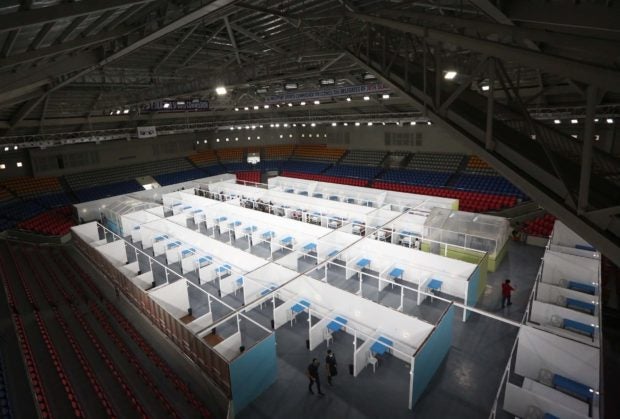 NEW HUB Ninoy Aquino Stadium at Rizal Coliseum is expected to be ready next week as a quarantine. —MARIANNE BERMUDEZ

PhilHealth said its reimbursement program would cover all patients who were admitted from Feb. 1 to April 14.

“Starting April 15 onward, all COVID-19 admissions will be covered using a new case rate benefit package. Guidelines on how they can get their refunds from PhilHealth will be released soon,” the state insurer said in a statement.

Earlier, PhilHealth CEO and president Ricardo Morales said the insurer would shoulder the “full cost of treatment” of those who would contract the virus.

He noted that this was due to the “novelty and the wide range of severity of the disease in the country for which no existing case rate or package based on accepted protocols has yet been established.”

As for the country’s capacity to test for COVID-19 cases, the DOH said there were already 10 laboratories nationwide capable of doing such tests.

Four other laboratories in Metro Manila are completing their proficiency test before they can go on full-scale implementation. These are SLMC Global City, The Medical City, Victoriano Luna Hospital and UP PGH Medical Research Laboratory.

Philippine Red Cross’ personnel who will operate its laboratory are currently undergoing a three-day training at RITM.

Twenty other laboratories are being assessed by a joint DOH-World Health Organization team to ensure that they adhere to biosafety standards, while another 44 labs are conducting their self-assessment.

—WITH A REPORT FROM MATTHEW REYSIO-CRUZ