The Taiwanese tree climber embracing women with a head for heights 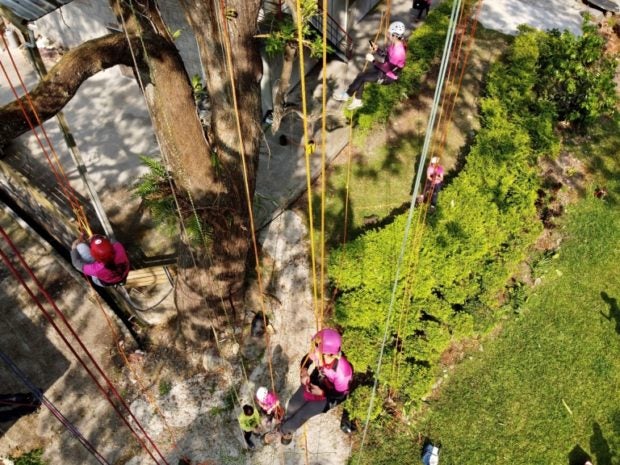 At a campground in central Taiwan, a team of women are using ropes to shimmy up a towering seven storey tall Chinaberry tree, fighting their fear of heights and reconnecting with nature.

Tree climbing remains somewhat niche in Taiwan but a growing number of women are embracing the challenge thanks to the island’s first international certified female climber arborist.

Sylvia Hsu, 26, said she was inspired to set up her own women-only tree climbing classes after seeing the popularity of such gatherings bloom in Europe.

“A women-only camp is a more relaxed environment,” she told AFP as members of her class dangled high up in the canopy above. “I was hooked on trees after my first climb… As I learn more about trees the more I appreciate them.”

Many of those attending the course were once novices terrified of the prospect of climbing up 30 meter tall trees.

“I threw up the first time I climbed to 10 meters… It wasn’t pretty, and everyone underneath screamed and scattered away,” Chen Yun-hsin, a documentary filmmaker, recalled. “I got used to it and went even higher. I feel a tree is like a living being, it protects me even when a wind is blowing.”

Tree climbing tends to fall into two categories. Arborists, also known as tree surgeons, who maintain trees for a living, and those that climb simply for fun.

Recreational climbing has been growing in popularity worldwide since United States arborist Peter Jenkins began promoting it in 1983, using techniques and tools from his profession and also borrowing from cavers and rock climbers.

Tree Climbers International, the organization he founded, now has more than 700 member instructors listed around the world teaching tree climbing.

The hobby side ranges from kids being pulled up on ropes to adrenaline-filled speed climbing competitions. Both the professional and amateur communities were often something of a macho sport. But slowly that is changing.

Boel Hammerstrand, a Swedish national, started a women-only event four years ago in the United Kingdom and now travels widely to help others do the same. Women in Europe working in the arborist profession have increased significantly, the 13-year veteran told AFP.

“It’s a lot more about brains than brawn,” she said at the camp in Taiwan.

Hsu says her classes have doubled in the last three years, especially with city dwellers and their children looking for a way to enjoy nature.

“Twenty years ago, parents would say ‘Come down, it’s too dangerous’. Now parents think it is interesting and sign up their children to come,” Hsu said.

Cheng Han-chien, a high school teacher at the camp, says the “magical feeling” you get in the canopy keeps drawing her back.

“I love trees but before I could only touch their roots,” Cheng chuckled. “Now, I can be really close to its body.”

Out of the 29 certified arborists in Taiwan, only three are women, including Hsu. Many struggle to find enough work given it is often cheaper and quicker to hire a crane and anyone with chainsaw skills.

“My family, like most families in Taiwan, do not think you can support yourself climbing trees,” Hsu recalled of her parents’ reaction when they first found out about her career choice.

But an unusual source of income in the last few years has been retrieving drones. In the last two months alone, Hsu and her climbing buddies have successfully found and retrieved 41 drones. Each retrieval cost between $100 to $160 plus mileage reimbursement.

“We have a drone rescue squad… and business has been brisk.”

Mina Wang, a 22-year-old university student, says she plans to become a professional tree surgeon after she graduates this summer.

She is brushing upon her skills before taking her certification exam.

“Every time I am with a tree, I feel like I am with a friend and companion,” she said with a smile. “I want to help trim its twigs and branches so that it can happily grow again.” JB