WASHINGTON  — With the military under broad pressure to step up its coronavirus response, Defense Secretary Mark Esper on Sunday defended the firing of an aircraft carrier commander who sought help for sailors during an outbreak as a matter of holding leaders “accountable.” 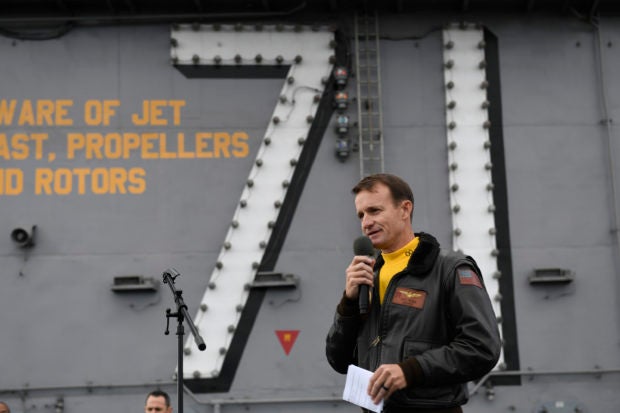 In this Nov. 15, 2029, photo U.S. Navy Capt. Brett Crozier, commanding officer of the aircraft carrier USS Theodore Roosevelt (CVN 71), addresses the crew during an all-hands call on the ship’s flight deck while conducting routine operations in the Eastern Pacific Ocean. U.S. defense leaders are backing the Navy’s decision to fire the ship captain who sought help for his coronavirus-stricken aircraft carrier, even as videos showed his sailors cheering him as he walked off the vessel. Videos went viral on social media Friday, April 3, 2020, showing hundreds of sailors gathered on the ship chanting and applauding Navy Capt. Brett Crozier as he walked down the ramp, turned, saluted, waved and got into a waiting car. (U.S. Navy Photo by Mass Communication Specialist 3rd Class Nicholas Huynh via AP)

He also said the matter was under review.

In two television interviews, Esper said acting Navy Secretary Thomas Modly made a “very tough decision” last Thursday to oust Capt. Brett Crozier of command of the USS Theodore Roosevelt, which was docked in Guam, and that he supported the decision.

“It was based on his view that he had lost faith and confidence in the captain, based on his actions. It was supported by Navy leadership,” Esper said.

Still, the Pentagon chief declined to explicitly say he agreed with Modly’s assessment, noting that there is “an investigation ongoing.”

“This could ultimately come to my desk,” he said. “I think Secretary Modly laid out very reasonably, very deliberately the reasons why. And I think, when all those facts come to bear, we will have a chance to understand why Secretary Modly did what he did.”

Crozier circulated a memo to Navy leaders last week that was obtained by news media in which he urged speedy action to evacuate the ship of nearly 5,000 sailors as the coronavirus began to escalate. Modly said Crozier “demonstrated extremely poor judgment” in the middle of a crisis, although Navy officials later announced they would offload 2,700 sailors in the coming days.

Videos went viral on social media over the weekend, showing hundreds of sailors gathered on the ship chanting and applauding Crozier on Thursday as he walked off the vessel, turned, saluted, waved and got into a waiting car.

His firing comes amid pressure on the military as it seeks to step up its response to the coronavirus outbreak, including sending two Navy hospital ships to assist New York and Los Angeles.

On Sunday, Esper said the Pentagon was sending over 1,100 additional doctors, nurses and other medical staff to New York as part of a COVID-19 operation that would have the military in charge of “the largest hospital in the United States,” with 2,500 beds at the city’s Jacob Javits Convention Center.

Esper issued new requirements for those visiting or working on Department of Defense installations regarding the use of cloth face coverings. He said that “to the extent practical,” all individuals on department property “will wear” the coverings when they cannot maintain six feet of social distance from others. The guidance, outlined in a memo to senior military leaders Sunday, is effective immediately.

As the coronavirus pandemic worsens and the country turns increasingly to the military for help, America’s armed services have been struggling to get new recruits as families and communities hunker down. The services, as a result, could fall thousands short of their enlistment goals if the widespread lockdowns drag on, forcing them to pressure current troops to stay on in order to maintain broader military readiness.

Asked over the weekend about whether Crozier’s firing could hurt morale in the military, President Donald Trump said he was not involved with the decision but agreed with it “100 percent.”

“I thought it was terrible what he did to write a letter,” he told reporters Saturday. “I mean, this isn’t a class on literature. This is a captain of a massive ship that’s nuclear powered. And he shouldn’t be talking that way in a letter. He could call and ask and suggest.”

Esper insisted it was not unusual for the Navy to relieve commanders so quickly without first completing a review into their actions. But he also declined to say what will happen to Crozier, citing the current ongoing investigation.

Esper said he backed Modly’s decision after also receiving advice from the chief of naval operations and Gen. Mark Milley, the chairman of the Joint Chiefs of Staff.

“It’s just another example of how we hold leaders accountable for their actions,” Esper said.

He said over half of the ship had now been tested. About 155 sailors had tested positive for COVID-19, exhibiting “mild and moderate” symptoms with “no hospitalizations whatsoever.”

Esper said not all the sailors will be evacuated because the ship has sensitive equipment and weapons on board, and a new commander will be arriving there soon to assess the crew’s safety.

The ouster has drawn fire from different quarters, including former military commanders.

On Sunday, Democratic presidential candidate Joe Biden called the Trump administration’s handling of the case as “close to criminal.”

“The idea that this man stood up and said what had to be said, got it out that his troops, his Navy personnel were in danger,” he said. “I think he should have a commendation rather than be fired.”

“In this era when so many seem to place expediency over honor, it is heartening that so many others are showing great courage, some even risking their lives. Theodore Roosevelt, in his time, chose the honorable course,” Tweed Roosevelt wrote in an op-ed Friday in The New York Times. “Captain Crozier has done the same.”

Esper appeared on CNN’s “State of the Union” and ABC’s “This Week,” and Biden also was on ABC.