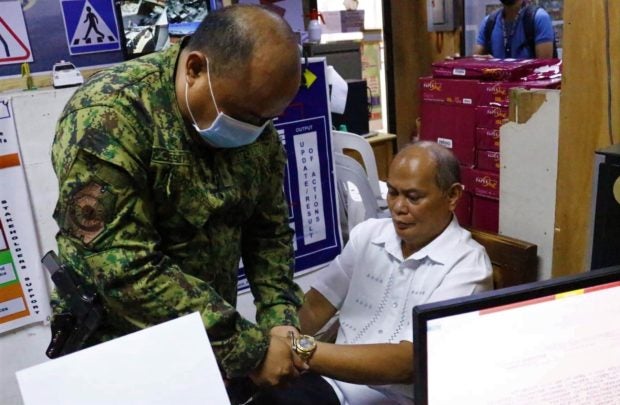 ARRESTED. A police officer removes the handcuffs from Pastor Alfred Caslam (right). Authorities arrest the pastor for defying that government order that bans mass gathering in the city and for failing to impose social distancing as the city grapples with COVID-19 threat. CONTRIBUTED PHOTO (from the Cagayan de Oro City Information Office)

CAGAYAN DE ORO CITY – A pastor is now facing charges for holding worship service attended by close to 500 of his church members on Sunday, April 5.

Arrested for defying the ban on mass gathering was Pastor Alfred Caslam, 58, married and resident of Zone 6, Barangay Cugman here.

Chua said Caslam would be facing charges for violation of section 9 (d) of Republic Act 13332 or the Mandatory Reporting of Notifiable Diseases and Health Events of Public Health Concern Act.

The section of the law prohibits “non-cooperation of persons and entities that should respond to notifiable diseases or health events of public concern.”

Chua said the church leader defied government order that banned mass gatherings in the midst of the coronavirus disease 2019 (COVID-19) pandemic and disobeyed a person in authority.

“We warned him last Sunday (March 29) about policies on social distancing and mass gathering due to the coronavirus, but it seems he did not heed our warning,” Chua said in a phone interview.

He said among the church goers were children, old people and persons with disability.

In an interview, Caslam said he did not realize that church attendees would reach hundreds. He also said he was mindful of the city government’s directive on mass gathering and social distancing.

“We were told to observe social distancing, which we complied. In fact, we arranged the seats to ensure that there would be spacing in between churchgoers,” he said.

Caslam said it just happened that there was an overwhelming attendance of church members. He said he was not able to control the number of those who joined the worship.

“I could not bring myself to tell them not to go to church or to drive them away. Had I done that, then my members would no longer attend worship services,” he said.

Caslam said he was already in the middle of a sermon when he realized there were more people in church than what he expected.

“It was my fault and I take full responsibility for it. I would like to ask for forgiveness. If they can forgive me, I promise that it will not happen again,” he said.

Antonio Resma, head of the city’s Regulatory Compliance Board, said he had already endorsed the copy of church members in attendance to the city health office to determine who among them would be considered PUMs and PUIs.

“It is now the call of the city health office to trace the church members through the barangay health emergency response team [BHERT],” Resma said.

BHERT will determine if those on the list reside in the barangays and whether they have the symptoms.

Chua said he and his team would be willing to subject themselves to self-quarantine if any of the church members would be declared either PUM or PUI.

Caslam is now under police custody. He will undergo medical examination before he will be sent to the city detention facility Monday, April 6.