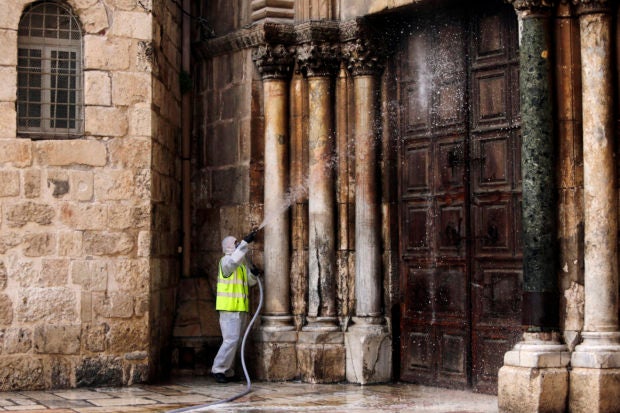 A worker disinfects the doors of the Church of the Holy Sepulchre in Jerusalem, as general public movements are limited to prevent the spread of coronavirus. Image: AP/Mahmoud Illean

Israel is working with foreign governments and Orthodox Christian leaders in the Holy Land to make sure that one of their most ancient and mysterious rituals — the Holy Fire ceremony — is not extinguished by the coronavirus outbreak, officials said Friday.

Each year, thousands of worshippers flock to Jerusalem’s Old City and pack into the Church of the Holy Sepulcher — built on the site where Christian tradition holds that Jesus was crucified, buried and resurrected — for the pre-Easter ceremony.

Top Eastern Orthodox clerics enter the Edicule, the small chamber marking the site of Jesus’ tomb, and exit with candles said to be miraculously lit with “holy fire” as a message to the faithful. Details of the flame’s source are a closely guarded secret.

During the ceremony, worshippers crowd closely together around the Edicule and use candles to pass the flame from person to person, illuminating the inside of the church. The flame is then transferred to special containers to be dispatched to Orthodox Christian communities around the world.

Due to a ban on large public gatherings this year because of the pandemic, Israeli officials say the April 18 ceremony will be limited to about 10 religious leaders from various Orthodox denominations. They have also developed a creative way to deliver the flame to overseas communities.

Because anyone entering Israel must go into quarantine, foreign dignitaries coming to pick up the flame will receive it on their plane and immediately return home.

The coronavirus causes mild to moderate symptoms in most patients, who recover within a few weeks. But it is highly contagious and can be spread by people showing no symptoms. It can cause serious illness and death in some patients, particularly the elderly and those with underlying health issues.

Israel has reported more than 7,000 confirmed cases and at least 38 deaths.

Akiva Tor, who heads the Israeli Foreign Ministry’s department for world religions, said the arrangement has been discussed with local church leaders and coordinated with several foreign countries with large Orthodox populations, including Greece, Russia, Georgia and Ukraine.

Tor said church officials have been understanding. “We have the same goal in mind, which is to enable the continuation of this miraculous event while being respectful of the medical emergency which is taking place,” he said. RGA

PH Christianity at 500: ‘Little boy’ started it all