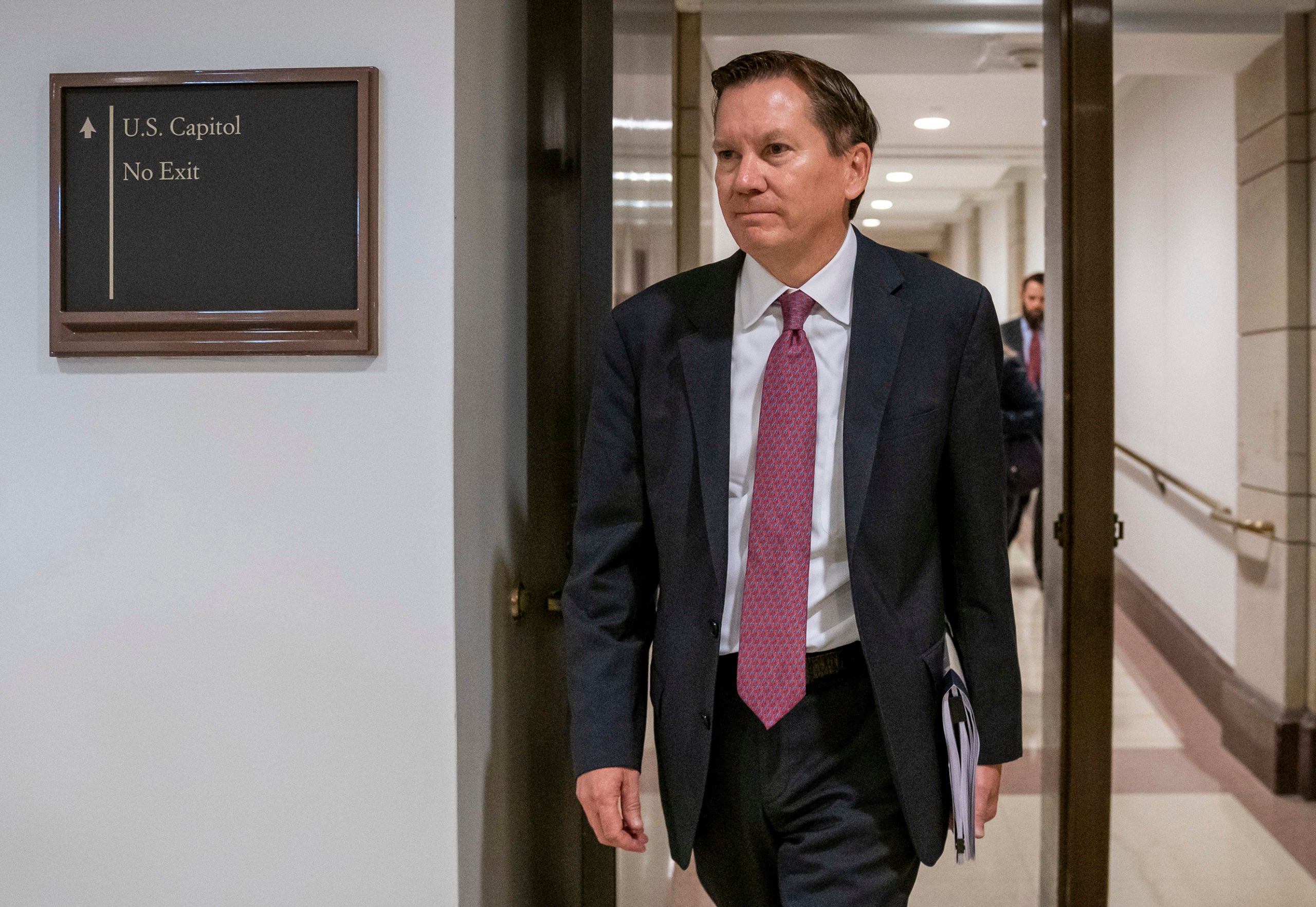 FILE – In this Oct. 4, 2019, file photo, Michael Atkinson, the inspector general of the intelligence community, arrives at the Capitol in Washington for closed-door questioning about a whistleblower complaint that triggered President Donald Trump’s impeachment. Trump has fired Atkinson. Trump informed the Senate intelligence committee Friday, April 3, 2020, of his decision to fire Atkinson, according to a letter obtained by The Associated Press. (AP Photo/J. Scott Applewhite, File)

WASHINGTON  — President Donald Trump on Friday abruptly fired the inspector general of the intelligence community, sidelining an independent watchdog who played a pivotal role in his impeachment even as his White House struggled with the deepening coronavirus pandemic.

Trump informed the Senate intelligence committee late Friday of his decision to fire Michael Atkinson, according to a letter obtained by The Associated Press. Atkinson handled the whistleblower complaint that triggered Trump’s impeachment last year.

Atkinson’s firing, which is part of a shakeup of the intelligence community under Trump, thrusts the president’s impeachment back into the spotlight as his administration deals with the deadly spread of coronavirus. As Trump was removing Atkinson, the number of U.S. deaths due to the virus topped 7,000.

Trump said in the letter that it is “vital” that he has confidence in the appointees serving as inspectors general, and “that is no longer the case with regard to this inspector general.”

He did not elaborate, except to say that “it is extremely important that we promote the economy, efficiency and effectiveness of federal programs and activities,” and that inspectors general are critical to those goals.

Atkinson was the first to inform Congress about an anonymous whistleblower complaint last year that described Trump’s pressure on Ukraine to investigate Democrat Joe Biden and his son.

That complaint prompted a House investigation that ultimately resulted in Trump’s impeachment.

In letters to lawmakers in August and September, Atkinson said he believed the complaint was “urgent” and “credible.” But the acting Director of National Intelligence at the time, Joseph Maguire, said he did not believe it met the definition of “urgent,” and tried to withhold the complaint from Congress.

The complaint was eventually released after a firestorm, and it revealed that Trump had asked Ukrainian President Volodymyr Zelenskiy in a July call to investigate Democrats. The House launched an inquiry in September, and three months later voted to impeach Trump. The Republican-led Senate acquitted Trump in February.

Trump said in the letter to the Senate that Atkinson would be removed from office in 30 days, the required amount of time he must wait after informing Congress. He wrote that he would nominate an individual “who has my full confidence” at a later date.

Democrats reacted swiftly to Atkinson’s removal. The top Democrat on the Senate intelligence panel, Virginia Sen. Mark Warner, said it was “unconscionable” that Trump would fire Atkinson in the midst of the coronavirus pandemic.

“We should all be deeply disturbed by ongoing attempts to politicize the nation’s intelligence agencies,” Warner said.

Tom Monheim, a career intelligence professional, will become the acting inspector general for the intelligence community, according to an intelligence official who was not authorized to discuss personnel changes and spoke only on condition of anonymity. Monheim is currently the general counsel of the National Geospatial-Intelligence Agency.

Atkinson’s firing is part of a larger shakeup in the intelligence community. Maguire, the former acting Director of National Intelligence, was also removed by Trump and replaced by a Trump loyalist, Richard Grenell.

The intelligence community, which Trump has always viewed with skepticism, has been in turmoil amid the constant turnover. Atkinson is at least the seventh intelligence official to be fired, ousted or moved aside since last summer.

The Office of the Director of National Intelligence, which was created to improve coordination of the nation’s 17 intelligence agencies after 9/11, has been in upheaval since former director Dan Coats, who had a fraught relationship with Trump, announced in July 2019 that he was stepping down.

Trump nominated Rep. John Ratcliffe, R-Texas, to replace Coats, but his selection drew sharp criticism from Democrats and a lukewarm response from some Republicans because of his lack of experience.

Trump withdrew Ratcliffe’s name from consideration shortly after he was nominated, but then re-nominated him again in February. The Senate has yet to move on the nomination.

Under the Federal Vacancies Reform Act, Grenell could only serve in his post until March 11 unless the president formally nominated someone else for the job. So by selecting Ratcliffe again, Grenell can stay for up to 210 days while Ratcliffe weaves his way through the Senate confirmation process, and for another 210 days if senators reject Ratcliffe’s nomination.

Read Next
79 foreigners stranded due to COVID-19 leave Negros Occidental to go back home
EDITORS' PICK
Cherry Mobile teams up with Cloud Panda PH, launches online store
WHO resumes hydroxychloroquine coronavirus trials
COOCAA TV Bounce Back Sale offers up to 50% off
DOLE eyeing P20-B subsidy for MSMEs
Over P785M distributed to 98K PUV drivers in Metro Manila — DSWD
SMDC The Good Guys on the Go
MOST READ
Kris Aquino goes home after quarantining for nearly 3 months in Puerto Galera
It’s final: Anti-Terror Bill now only needs Duterte’s signature
Piolo gets first call slip from ABS-CBN to resume ‘ASAP’ taping
‘She had no right to be in Singapore’: Youth pleads guilty to abusing Filipino maid
Don't miss out on the latest news and information.